NBC is obsessed with athletes who are mothers and athletes' mothers. Let's stop defining women by their kids 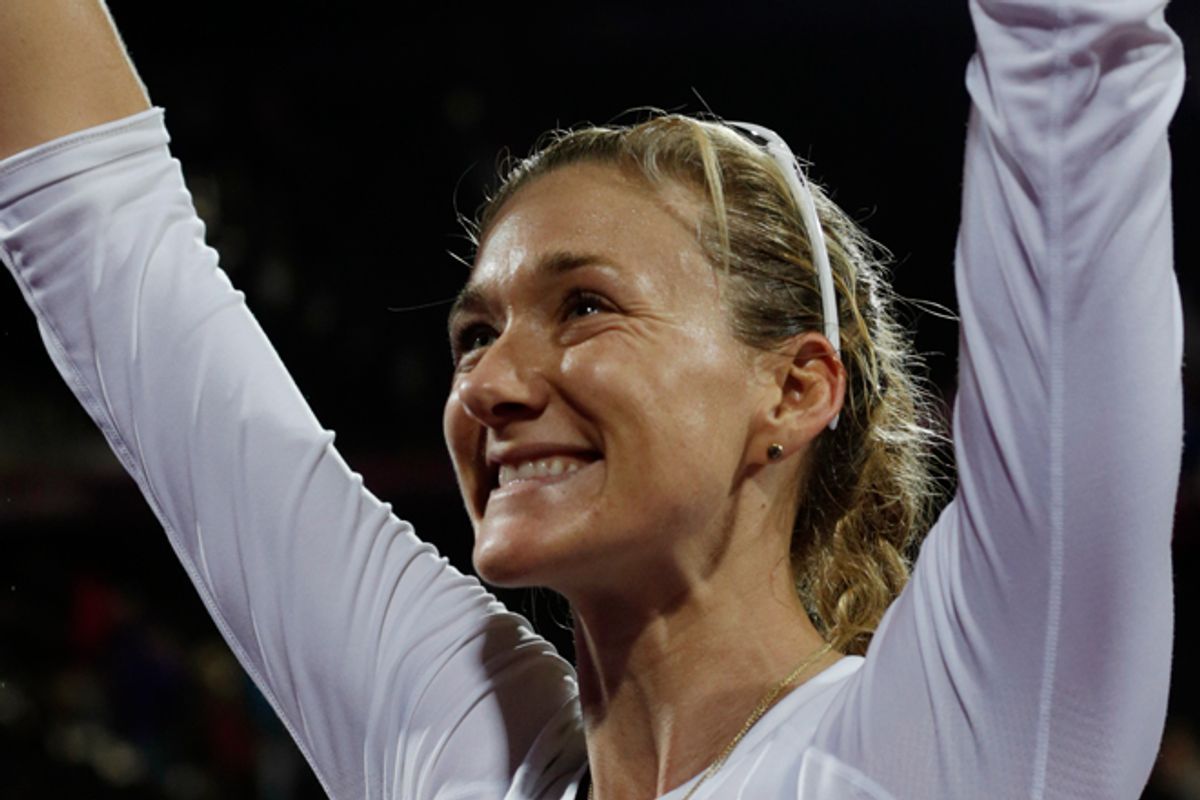 Months before the 2012 Olympics even began, it was clear that this one was going to be different. This one was for the moms. And nowhere has that been more evident than in Monday's eager coverage of American beach volleyball Olympian Kerri Walsh.

Walsh, along with her partner Misty May-Treanor, is a two-time gold medalist who is currently well on the way to scooping up another medal. On Monday, Walsh and May-Treanor defeated a Czech team to advance in the competition. Walsh is also the mother of two young sons, which is great because it gives NBC correspondents something to talk about. The pre-match profile of Walsh and May-Treanor had Walsh explaining how she takes her children all over the world with her, how her sister is her nanny, how important motherhood is. Then the commentary during the match itself noted how Walsh has a large team of helpers for her family, and how motherhood has made her a stronger and more grounded player and person. Sure, the human interest element is always there in the Olympics, but you can't miss the whiff of "Look who's having it all!" in this one.

Moms have been a running theme for these games ever since Procter & Gamble rolled out its surprisingly off-putting "Thank you, Mom" campaign earlier this year -- the one that, while ostensibly paying tribute to the devotion of Olympians' parents, managed to rebrand motherhood as not just a job, but the very hardest and very best one in the world. Of course, the fact that the spot was created by a purveyor of laundry detergent and diapers might have had a little something to do with the maternal glory message. As P&G says, "Behind every athlete is a mother." Suck it, dads!

Now that the games are underway, the mom props have really been rolling in. NBC's coverage has featured prerecorded bits of the athletes paying homage to their mothers, and shots of the Olympians' moms watching their children's events – often with sweet, funny results. It's cute and all, but the Daily Beast is on to something when it blames the "mommy cam" for turning the Olympics into "one big Lifetime original movie." And it certainly leaves little room for the dedication and love of fathers anywhere in there.

But if the Olympic obsession this time out is big for the mothers of athletes, it's even grander for the mothers who are athletes. This year's games feature 14 mothers (13 competitors and one alternate). And this is where the waters get murkier, and the line between empowerment and diminishment becomes less clear.

That we live in a world that still boggles at the notion of a woman having children and achieving processional success was made abundantly clear the second Marissa Mayer announced she had a bun in the oven. In much the same way, there's a palpable sense of a mad scramble to put a woman in her maternal place in the way that four-time Olympic soccer star Christie Rampone is touted as a "soccer mom." Or in the way that Lashinda Demus is described as "hurdling motherhood, racing with success." Or in the way that five-time women's boxing champion Mary Kom is defined in a story that reads "Mom Mary Kom gears up for gold medal run." You know, I don't ever remember seeing a headline about "Dad Lance Armstrong" or "Father of Two Laird Hamilton." There's a subtle undermining at play in these kinds of stories, the message that no matter what else a woman achieves in her public life, she is always going to be first and foremost defined by her children. That if she attains anything else, it's kind of a neat trick.

It is undeniably a fantastic thing for all women that motherhood doesn't have to signal the end of one's athleticism. It's wonderful that the royal butt kicking of pregnancy, childbirth and nursing no longer mean a woman's career in sports is over. It's cool that moms everywhere can now look at Christie Rampone or Kerri Walsh and think, OK, I guess I can hit that spinning class. The female athletes who are enjoying unprecedented career success while raising their children are absolutely trailblazers. They're heroes. They're inspiring their fellow mothers and, just as important, they're telling the world that both the rigorous physical effort and consistent emotional devotion required of motherhood can make a woman stronger and more centered than ever before. That mothers are assets in their respective fields.

So I'm glad that Walsh and company are carrying that particular torch. But I still can't help longing for the day when being a mother who also has her own professional achievements – whether as a CEO or an Olympic medalist – is no big deal. When it's understood that motherhood and everything else in a woman's life and career are not at odds. I want dads to get credit for raising athletes and for being athletes too. I want motherhood to be an important part of our identities but not our first names. I want Mary Kom to be Mary Kom.