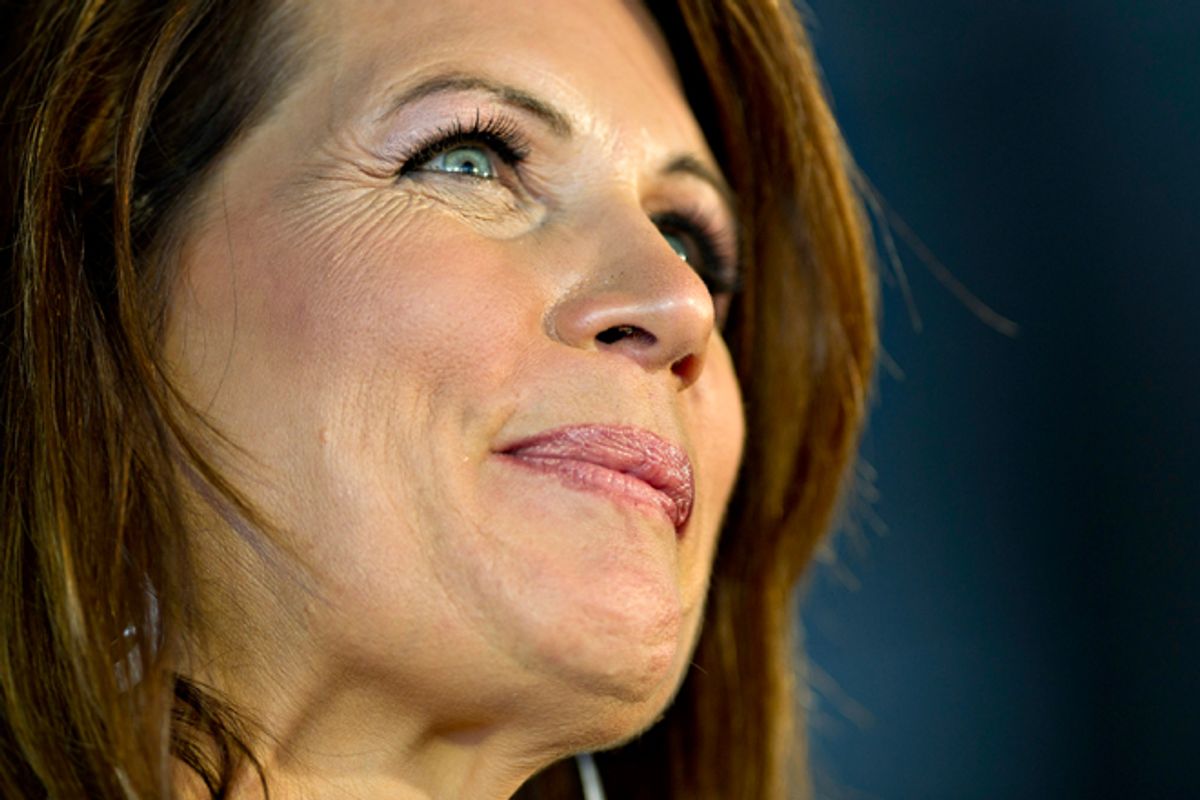 In just three terms, Rep. Michele Bachmann has become an institution in the House, raising more money than any of her colleagues in either party and serving as the face of the insurgent Tea Party movement in Washington. With a massive war chest, a huge national following, and close allies with very big microphones, she seems unstoppable -- so much so that she was at one point a front-runner for the Republican presidential nomination. But despite all that, there is a real possibility that Bachmann could lose her reelection bid this November.

Tuesday was the Republican primary for her congressional seat, and while Bachmann sailed through, there were some signs in the results that may give her campaign pause. Smart Politics, a blog of the Humphrey School of Public Affairs at the University of Minnesota, noted that Bachmann’s win of 80.4 percent of the primary vote was the smallest vote percentage received by an incumbent Republican congressman in the state since 1962 -- that covers 75 incumbent reelection bids in 50 years. This could suggest that Republican voters in the district have cooled on Bachmann. Indeed, she’s drawn sharp GOP rebukes on Capitol Hill for her witch hunt against Muslims in the U.S. government, and it stands to reason that some Republicans in her district have also been turned off by the effort (her Republican primary challengers slammed her for it). The remaining roughly 20 percent of the vote went to two GOP opponents -- Smart Politics notes that she’s the only incumbent Republican to inspire two fellow party members to challenge her since the mid-1950s.

There’s been scant polling in the district, but a June survey commissioned by her Democratic challenger, Jim Graves, found Bachmann with a dangerously narrow lead. “Bachmann's unsuccessful bid for president had a clear and negative impact on her standing among voters in the new Minnesota 6 CD. She received low marks on both her job performance and personal favorability,” pollster Greenberg, Quinlan, Rosner found. The survey found her leading Graves by just 5 points and under 50 percent, even though her name ID was almost 100 percent in the district and Graves is mostly obscure.

In an interview last month, Graves pointed out to Salon that Bachmann has benefited in the past two cycles from third-party challengers who have disproportionately syphoned votes from the Democratic candidate. Minnesota Public Radio political writer Bon Collins called Independence Party candidate Bob Anderson  -- who took over 10 percent of the vote in 2008 -- “Michele Bachmann’s best friend" because he paved the way for her reelection. Bachmann won by just 3 points that year. In 2010, her margin was bigger, but it was a wave election for Republicans and Bachmann had managed to avoid major controversy ahead of the election. That year, Anderson, who ran again, took about 6 percent of the vote.

This year, there is no major third-party candidate, giving Bachmann her first head-to-head race since her election. Tom Horner, a former gubernatorial candidate from the Independence Party, which has mostly gotten onboard with Graves’ campaign, told the St. Cloud Times that the lack of a third candidate is significant. "I think that’s going to make a huge difference. It’s the opportunity to compare and contrast two candidates, head to head," he said.

Graves also expects to get a boost from sharing the ticket with Democratic Sen. Amy Klobuchar, the state’s most popular politician, whom he expects to win the district, despite its Republican tilt. Add to that a strong Democratic candidate with healthy fundraising and the option to self-fund (he said he has no plans to tap into his wealth) and Democrats feel good. “Now, we’re very confident,” Graves told Salon.