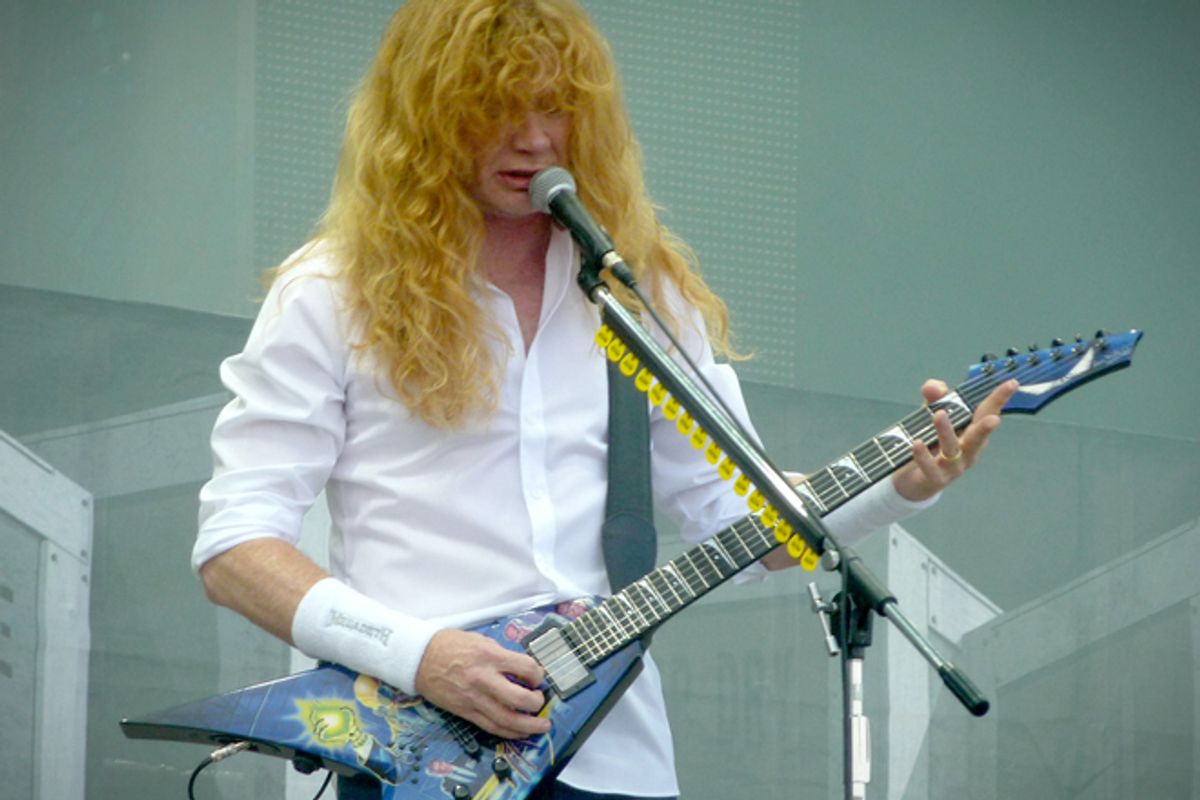 When did Dave Mustaine trade in heavy metal for a tinfoil hat? During a concert in Singapore, the 50-year-old Megadeth frontman declared that the Obama administration was responsible for the recent mass shootings in Aurora and Oak Creek.

"My president," he told the crowd, making a dramatic gagging gesture, "is trying to pass a gun ban. So he's staging all of these murders, like the ‘Fast and Furious’ thing down at the border, in Aurora, Colo., all the people that were killed there, and now the beautiful people at the Sikh temple … I don’t know where I'm gonna live if America keeps going the way it’s going because it looks like it's turning into Nazi America."

And then, presumably, he continued to rock some gnarly tunes while the rest of the band rolled their eyes. Mustaine's comments might have gone unnoticed had TMZ not posted video of the tirade, which immediately went viral. Because you don't often get to see that much gibberish combined with that much hair.

Mustaine is certainly not a great fan of progressive politics. He's become increasingly conservative since he became a born-again Christian several years ago, and supported Rick Santorum for president. Rick. Santorum. And earlier this year, in a Canadian talk show interview, Mustaine said he had "a lot of questions about [President Obama], but certainly not where he was born. I know he was born somewhere else than America."

One could almost laugh off Mustaine's delusional, factless paranoia, except for a few not-so-funny aspects. For starters, it's one thing when Mr. Joe Q. Nobody mouths off in his fringe Yahoo group. It's different when a guy who's sold 30 million albums does so. He's got a platform and a following. And in a world where celebrity affords a degree of automatic credibility, God help us, people listen to him. More depressingly, he's not the only guy in the world aboard the "This Is All Obama's Fault" crazy train.

Last month, when Gun Owners of America president Larry Pratt talked to Slate about the Aurora shooting, he said:

We're still not clear who may or may not have been involved with the guy. He found a way back into the theater, and we don't know how that happened. He may have jimmied the door himself; somebody may have worked with him. It's reasonable to ask. Here we are, the same week they may be signing a UN gun control treaty. After the government got involved in Fast and Furious, the WAY they got involved, it's not a preposterous question to ask -- if this was some kind of operation.

Actually, "preposterous" is exactly the word for what he's describing. Adding new fuel to the crazy fire, on Thursday, Paul Joseph Watson wrote (on noted conspiracy theorist/radio blowhard Alex Jones' site PrisonPlanet) that "Mustaine's suspicions about the Colorado and Sikh temple shootings are not without foundation," an assertion based almost entirely on early, confused reports from both massacres that there may have been more than one shooter.

In much the same way that haters gonna hate, crazy's gonna be crazy. But it is shamefully messed up to use the deaths of 18 innocent people as an excuse to run off at the mouth about your paranoia that Obama is going to take your guns away. And while the beauty of being American is that everyone is entitled to have an opinion and express it, no matter how half-baked it may be, next time Mustaine wants to exploit tragedy for between-song patter, I hope he decides instead to shut up and sing.