Todd Akin’s response to his party’s pleas that he quit the race? A new television ad 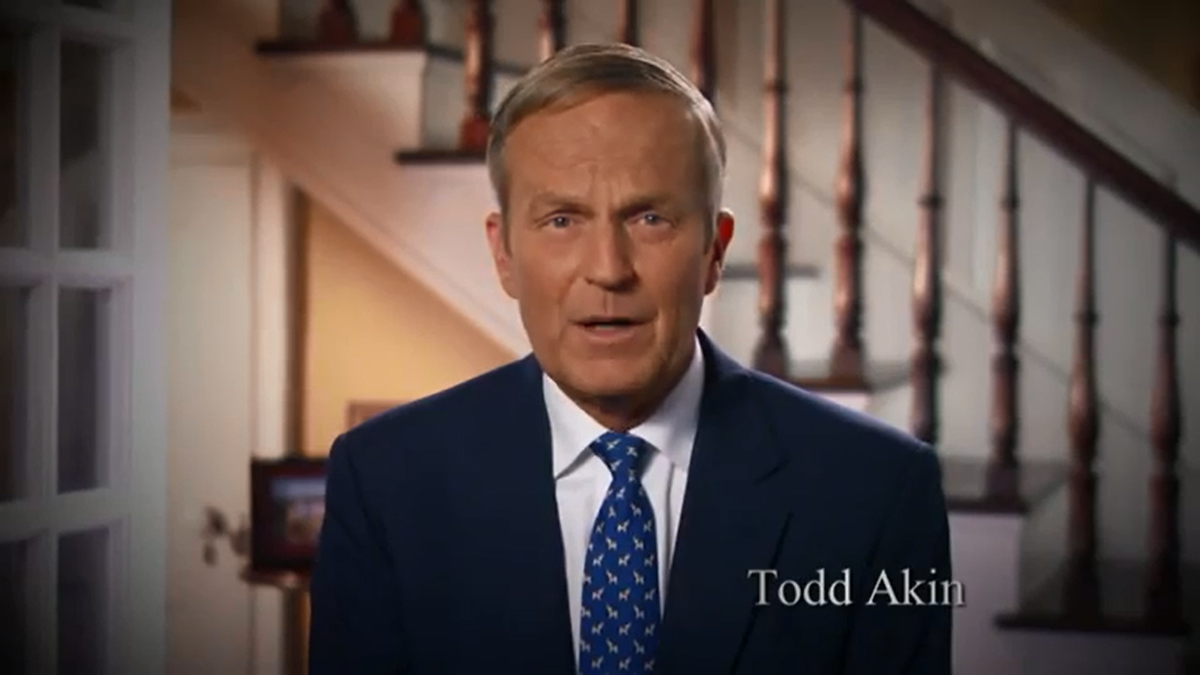 Todd Akin was a no-show on Piers Morgan’s CNN show last night, leading the host to call him “a gutless little twerp” and to put a shot of an empty chair on the screen throughout the program. But Akin’s last-minute decision to back out of the interview apparently doesn’t mean he’s decided to back out of Missouri’s Senate race.

Instead, he’s up with a new ad today in which he issues a direct apology to viewers for his comments about “legitimate rape” over the weekend:

Rape is an evil act. I used the wrong words in the wrong way, and for that I apologize. As the father of two daughters, I want tough justice for predators. I have a compassionate heart for the victims of sexual assault. I pray for them. The fact is, rape can lead to pregnancy. The truth is, rape has many victims. The mistake I made was in the words I said, not in the heart I hold. I ask for your forgiveness.

This is bad news for Republicans hoping that Akin will reconsider his candidacy and drop out by the end of today, the deadline for pulling a no-questions-asked candidate switch. Akin could still exit the race after today, but it would be more complicated, requiring him to petition for a court order and to pay for the printing of new ballots.

The effort by national Republicans to force him out has been rather impressive. Winning the Missouri seat that Democrat Claire McCaskill now holds is pivotal to their Senate takeover hopes, and they quickly grasped how severely Akin’s rape comment complicated their chances. Just yesterday, the National Republican Senatorial Committee and Crossroads GPS announced they would stop airing ads in Missouri as long as Akin is a candidate, while the Tea Party Express publicly called on him to exit the race. So did RNC Chairman Reince Priebus and Fox News’ Sean Hannity, and Paul Ryan apparently made the same request to Akin privately.

By launching the ad, Akin is making it clear that he thinks he can ride out the storm. It’s not hard to understand why.

For one thing, it’s still not clear how much political damage he’ll suffer from all of this. McCaskill has been the most endangered Democratic incumbent on the board all year, and while Akin was widely considered the weakest of her potential GOP foes, he has still consistently led her in polls. The controversy over his comment (and the intraparty push to get him out of the race) will dominate the news this week, but the election is still three months away. Akin is probably calculating that a forceful apology now combined with more self-discipline going forward (something that may be hard for him to pull off) will keep him in contention, and that eventually the desire of Missourians to replace McCaskill with a Republican will take over.

For what it’s worth, a snap poll out this morning from PPP offers some encouragement for Akin. It was conducted last night and shows him ahead of McCaskill by a point, 44 to 43 percent, even as he sports a hideous 24-58 percent personal favorable rating. This is hardly a definitive measure; polling conducted later this week and next week will provide a much better picture of where the race stands. But it is an indicator of how hard this race is for the GOP to lose. This is the wrong year for an incumbent Democratic senator to be running for reelection in the Show Me State.

It’s also worth keeping in mind that most of the Republicans who are pushing Akin to quit weren’t with him in the GOP primary earlier this month. Party leaders largely lined up behind his opponents, leaving Akin to fend for himself; he lagged behind in polls for much of the race and his victory on Aug. 8 was a genuine upset. That’s the kind of experience that can make it very tempting for a candidate to thumb his nose at party leaders, especially when the candidate is a true-believer ideologue.

And Akin surely realizes the importance of his race to the GOP. It’s easy for the NRSC and Crossroads to say they’re pulling the plug on him now. But what happens if Akin sticks around and is in a real fight with McCaskill come October? Those same groups would be risking Republican control of the Senate if they maintained their Missouri boycott. If you’re Akin, why not call their bluff?