Stop sucking up to Bloomberg

Why is New York's mayor perpetually portrayed as a hero? Because journalists fear him -- or want to work for him 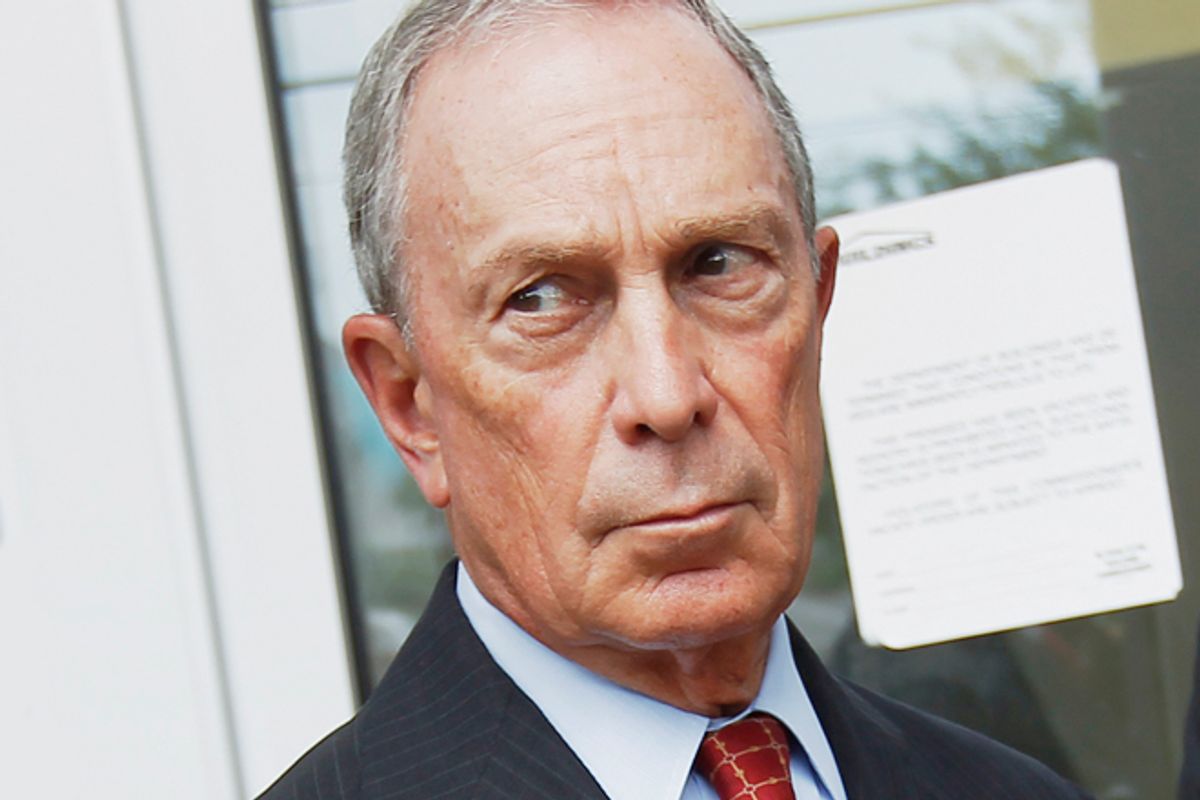 This week, Harper's magazine is publishing a report I've been working on for the better part of the last year. The piece looks at a powerful paradox in the media world whereby major metro newspapers are becoming more politically influential even as they lose readership, revenue and reporting resources. In one-newspaper towns all over America, this has made newspaper owners into 21st century Citizen Kanes -- able to suffuse both editorial page and news coverage with propaganda that serves their personal and political agendas.

You can find out more about the article here. As you'll see, I cover monopolists such as Dean Singleton, Douglas Manchester and Sam Zell, and the havoc they've wreaked on cities like Denver, San Diego and Chicago, respectively. These kind of owners do not see newspaper monopolies only from a short-term financial perspective, whereby objective journalism generates profit. On the contrary, as documented in my Harper's piece, they seem to see them as political investments whose returns in influence and power come about via slanted propaganda.

While evidence of this frightening worldview is pervasive, perhaps the best proof comes from one potential monopolist -- or at least oligopolist -- who is not in my Harper's piece, for the simple reason that he should be the subject of his own stand-alone article. I'm talking, of course, about New York Mayor Michael Bloomberg. His use of his media empire -- and more specifically, his deliberate effort to stoke rumors about a possible newspaper purchase -- show how in this new Citizen Kane Era, media ownership is valued as much for its political power as its profits.

Recall that though the whole of the Big Apple isn't (yet) dominated by a single newspaper, the Bloomberg News Terminal, Bloomberg Businessweek magazine, the Wall Street Journal and the Financial Times newspaper are an oligopolistic information cartel in the city's southern business district. The former two are already privately held by Republican Mayor Michael Bloomberg's eponymous corporation, while the Journal was recently swallowed up by that other media manipulator, Rupert Murdoch. That leaves the Financial Times as the only potential play for someone like Bloomberg who may want to further lock down the market. Not surprisingly, one of Hizzoner's aides, Kevin Sheekey, was quoted late last year fueling speculation that the latter might be the company's next acquisition.

Sheekey's central involvement in a possible acquisition is what's revealing here. After all, Sheekey isn't a business guy -- he's Hizzoner's top political consigliere, a Karl Rove wannabe steeped in election campaigns and political spin. His lead role in the potential purchase, then, highlights how newspaper monopolies are attractive to potential owners specifically for their political firepower. That truism was underscored by an anonymous Bloomberg executive who told the Daily Beast that the mayor is specifically interested in a newspaper because while the company's Wall Street business generates money "with the traders ... the influence lies well beyond the traders.”

Notice that word "influence" -- among the millionaire and billionaire moguls now taking over the newspaper industry, that's the real commodity being sought. And whether or not Bloomberg actually buys the Financial Times (or the New York Times), he's already accruing more of that commodity by having his political operatives periodically float the acquisition rumors.

To understand that process, simply consider a few basic questions: Have you ever wondered why Bloomberg is perpetually portrayed as an uber-popular mayor, despite consistent polls to the contrary, and despite barely winning reelection after grossly outspending his little-known opponent? Have you ever wondered how Bloomberg could be glowingly billed as a moderate liberty-loving hero even as he has trampled civil liberties and freedom in ways that would make a banana republic's dictator blush? Have you ever wondered why the mayor of New York is a ubiquitous guest on most major news programs, even though he is but the mayor of one city?

All of that has to do with fear and desire. Simply put, there's a fear among many in the media that Bloomberg may one day buy out their employer, and that if they don't treat him well, they'll be out of a job. Likewise, there's a desire among many to get a high-paying job from Bloomberg when that buyout moment happens, or to get a fat paycheck at one of the outlets he uses to convert has-been pundits and politicos into his loyal ideological spokespeople.

Newspaper competition once mitigated at least some of the problems that come with monopoly and oligopoly. If one paper reported something at the behest of its vainglorious owner, another newspaper might debunk it and expose the propaganda for what it was. But that competition is dwindling -- and as I show in my Harper's piece, it isn't being replaced by the Internet. Indeed, though there are some outlets like Salon that focus on and fund independent journalism, aggregation is the cyberspace norm, which means the Web is often amplifying the newspaper-based Citizen Kanes rather than challenging them.

Bloomberg's potential jump into the newspaper business proves he understands the centrality of newspapers in this mass information architecture -- and how that architecture can work even more to his advantage than it already is. He is but one Citizen Kane who sees today's media for what it is -- a place increasingly averse to genuine journalism, because journalism gets in the way of the owners' power.