"The Ambassador": A Borat-style quest for blood diamonds 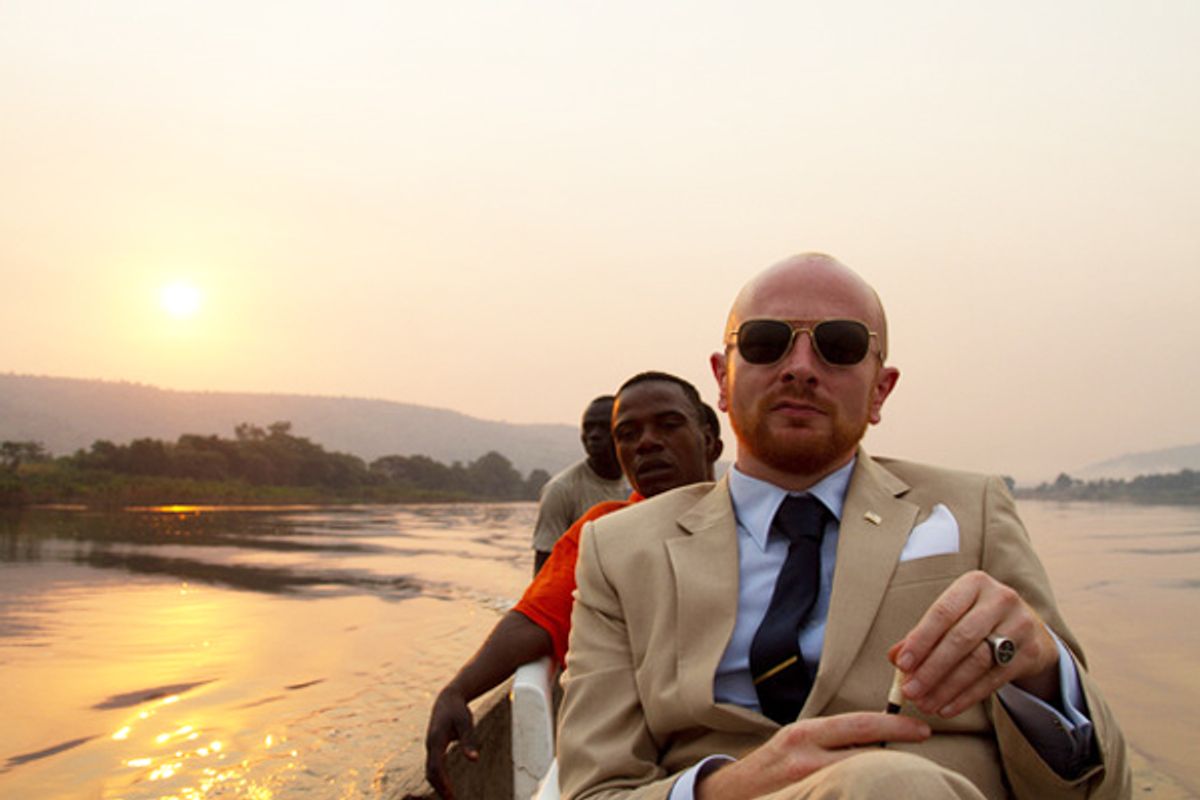 Mads Brügger in "The Ambassador"
--

As Danish prankster, comic and filmmaker Mads Brügger explains to his driver and fixer in the Central African Republic, he doesn’t want to be “racistic,” but he doesn’t much care for Asians. They’re greedy and devious; they have no morals. Paul, the young African who works for Brügger in his guise as a Liberian diplomat working on shady business deals, and may also be working for diamond-mine owners and government officials -- and, not coincidentally, for visiting Chinese deal-makers we never meet -- agrees with enthusiasm: “Yes! Exactly! They want everything for themselves! No morals at all!”

Like so much of Brügger’s controversial guerrilla documentary “The Ambassador,” this scene is queasy-making, hilarious, infuriating and depressing. Is he poking fun at the casual racism that underlies so much of human thought? Or the fact that if you pay someone enough money, he’ll agree with whatever you say? Or the simple, dumb irony of a white European, one who is trying to smuggle blood diamonds out of Africa with a purchased diplomatic passport, presuming to hold some sort of moral high ground over anybody? At least the China-bashing moment is subject to multiple interpretations, whereas the scene involving jokes about Adolf Hitler and Moët & Chandon Champagne, or the one in which Brügger plays recordings of whale songs for Pygmy tribesmen, just seem like murky postmodern pranks.

You’ll be fascinated, frustrated and enraged by “The Ambassador,” which is something like a bastard reworking of Joseph Conrad’s “Heart of Darkness” staged by Don DeLillo and Sacha Baron Cohen. (Brügger remarks at one point in the film that if the Congo is the heart of darkness, the Central African Republic is the appendix.) I use “bastard” in all possible senses of the word. If Brügger’s intentions are in many senses laudable – exposing the epic and corrosive corruption that surrounds the African diamond trade, and for that matter almost everything else about the governance and society of that continent – there’s an unmistakably malicious edge to the spectacle of this bald-headed Dane, a B-movie character in his linen suit, glove-leather boots and designer shades, dancing with a bunch of drunken Pygmies amid the ruined dreams of civilization.

This film has recently spawned international headlines after the Liberian government got its collective undies in a bundle over the fact that Brügger bought diplomatic credentials under false pretenses in order to conduct illegal or unethical business. That might be comical, if anything in this sordid tale of greed and corruption can be so described, as well as a magnificent example of missing the point. At any rate, it appears in the film that Brügger’s diplomatic status – arranged by a mustachioed Belgian out of a Graham Greene novel, if not a Monty Python sketch – was ultimately signed off by the proper authorities in Monrovia. (The film's producer says he has the paperwork to prove it.) So I guess their only argument is that it’s OK for a random European dude to buy a Liberian diplomatic post for $135,000 if he’s not planning to do something shady with it, and just wants to enjoy the hors d’oeuvres.

There’s no mistaking Brügger’s ambition and derring-do. He repeatedly puts himself in danger, given the fact that even traveling to the Central African Republic is a foolish thing for outsiders to do, never mind bribing government officials and buying black-market diamonds. As Brügger quips, you can only consider the CAR a “failed state” if you believe it was ever a functioning state in the first place. Ranked at No. 179 of the 187 listed countries in the Human Development Index, with an official per-capita income of $300 a year, the CAR’s economy largely depends on illegal trade in diamonds, ivory, homemade booze and wildlife both dead and alive. The only time the outside world has paid any official attention to the place was during the brief and vainglorious reign of the thoroughly nutso Emperor Bokassa I, who was deposed in a French-sponsored coup in 1979.

That kind of place is total catnip to Brügger, and there turn out to be quite a number of European and African consuls in Bangui, the landlocked African nation’s decrepit capital city; most of them are there for the same reasons he ostensibly is. Brügger uses hidden cameras to record conversations with all sorts of shadowy characters during his travels, including a British ex-Marine who sells diplomatic passports out of his Portuguese villa and an obese, Sydney Greenstreet-style Frenchman who served as head of state security for the current regime in Bangui (before being assassinated, most likely by his superiors). Beneath the nihilism and the practical jokes in “The Ambassador,” there’s also an undeniable sense of purpose. Brügger demonstrates personally that with white skin, enough money and the right connections – and enough money will acquire the right connections – a complete nobody can buy into the illegal trade in diamonds from unregulated conflict zones in central Africa, one of the dirtiest businesses on the planet.

A comedian and TV host in his native Denmark, Brügger leapt to international prominence with the 2009 film-festival hit “The Red Chapel,” in which he traveled to North Korea with a bogus performing troupe composed of two Korean-born men who had grown up in Denmark as adoptees. As with Baron Cohen’s work, part of Brügger’s shtick is to overload the high concept, underplay the social and political context and challenge you to be shocked and horrified and draw the "wrong" conclusions. (By suggesting that there are “right” conclusions, on the other hand, I may be falling into his trap.)

One of the Korean-Danish travelers in “The Red Chapel” had cerebral palsy or a similar disorder and was in a wheelchair, so the movie became an impenetrable tangle of semi-related issues: Social prejudice around disability, the Korean attitude toward emigration, the awkwardness of deliberately bad performance and the sheer Orwellian weirdness of the North Korean regime. On one level the whole project was a brilliant coup: Many documentary filmmakers have tried to gain access to North Korea, and none have succeeded the way Brügger did. On the other hand, many viewers felt understandable queasiness about the degree of lying and deception in “The Red Chapel,” even when those being lied to were the officials of a totalitarian government. (And I felt very sorry for the North Korean interpreter, a true believer hoodwinked by Brügger and friends. Has she been released from labor camp yet?)

Similarly, if Brügger hasn’t yet been called a racist for his portrayal of the widespread venality and corruption of African officialdom in “The Ambassador,” he probably will be. Virtually everyone he meets in both Liberia and the CAR is a walking, talking post-colonial stereotype, presenting a vague front of rectitude and Westernized behavior while eagerly accepting cash-stuffed envelopes to make problems go away. Brügger can plausibly argue that it’s not his job to supply historical context, and that depicting the interlinked worldwide web of white and black criminality behind the blood-diamond trade (with the Chinese just now getting into the game) is quite enough. Indeed, he actually visits a diamond mine in the lawless northern bush of the CAR, something human rights advocates have frequently failed to do. Maybe it’s just me who longs for a bit more Frantz Fanon in the mix, a bit more clarity about the fact that the point here is not simply making fun of fifth-rate African governments whose ruling elites were trained in ruthless rapine by their onetime colonial masters, and have taken their lessons to heart.

I do, however, blame Brügger for the fact that “The Ambassador” cuts itself short partway through its amazing and horrifying tale of skulduggery, and never makes clear – perhaps for legal reasons – whether he actually did smuggle diamonds out of the CAR (and, if so, what happened to them). After Brügger’s Danish assistant and interpreter angrily interrupts a session with a diamond merchant who’s instructing Brügger on how and where to carry the gems – yes, it’s what you’re thinking – the whole project seems to have been abruptly abandoned, leaving numerous questions hanging in the air amid the nightclub dancing and tacked on, pseudo-happy ending. I suppose Brügger’s final defense is that whatever harm he may do with his lies and deceptions and juvenile pranks – and I really didn’t like the business with the Pygmies and the whale – is vastly outweighed by the harm of simply letting these things go on in secret, which is what the rest of us have been doing all this time.

“The Ambassador” opens Aug. 29 at the IFC Center in New York; Aug. 31 in Los Angeles, San Francisco and Austin, Texas; and Sept. 7 in Atlanta, Denver, Houston, Portland, Ore., and Seattle, with more cities to follow. It’s also available on-demand from cable and satellite providers, and online from iTunes.