J.K. Rowling grows up — and gets knocked down 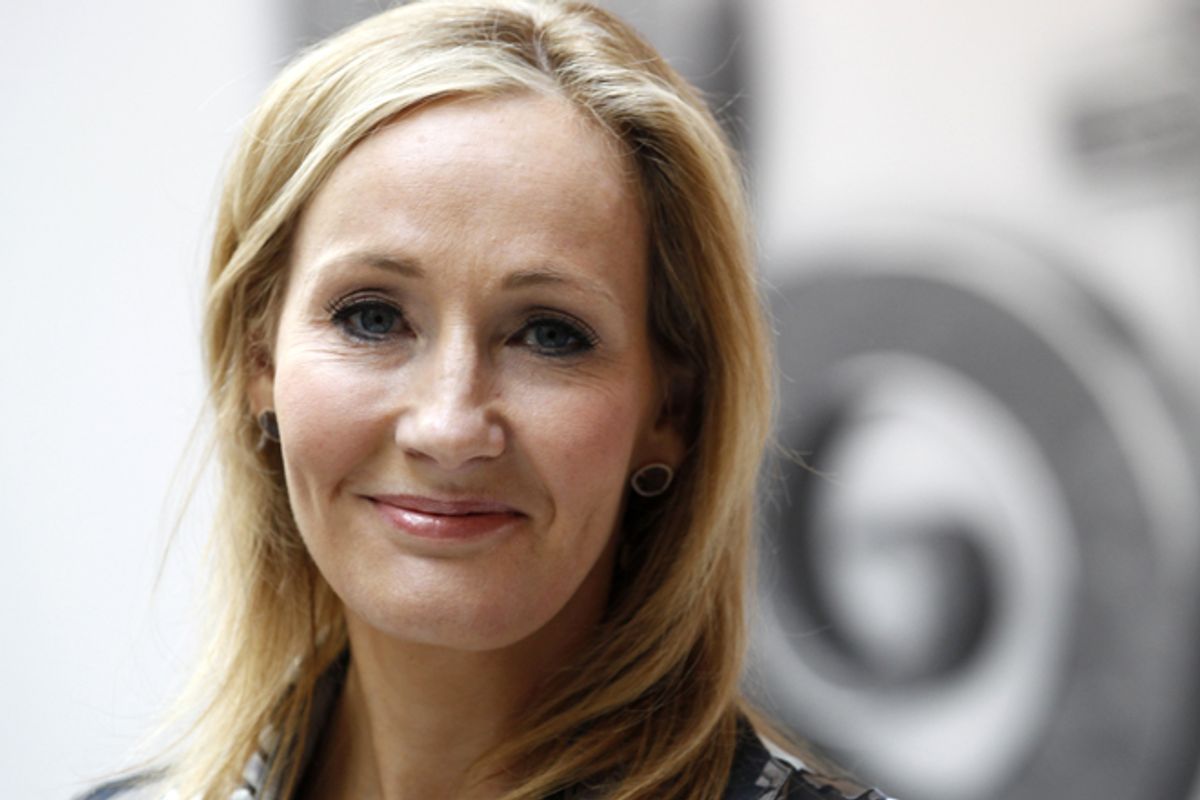 How did you deal with the stunning revelation, in Ian Parker's 9,000-word profile of J.K. Rowling in this week's New Yorker, that the author is not as warm as Rubeus Hagrid, as confident as Albus Dumbledore, or, alas, as brave and smart and accessible as her iconic hero, Harry Potter? Did it, as Gawker's Caity Weaver put it, "make you [not] want to hang out with J.K. Rowling," whose first adult novel, "The Casual Vacancy," is released on Thursday (and is, of course, already a best-seller). Were you as shocked as the Daily News, which announced that the author "is making no excuses for the very grownup prose and plotline" of the new book? Or did you feel a peculiar sense of satisfaction, knowing that the multimillionaire creator of one of the most beloved children's book series of all time comes off as an awkward, insecure woman who asked for – and was refused – quote approval on the story?

Parker's profile is aptly titled "Mugglemarch." It's a reference to a fan's not-quite-flattering alternate title to the 47-year-old Rowling's first go in the real, grown-up literary realm – a sphere in which her own wizards would dismiss as mere "Muggles" — those who possess no magic. But it also comes off as a rather pointed jab at the author herself, who from the very first paragraph is depicted as insufficiently dazzling.

By the fourth sentence, we learn that Rowling "has a reputation for reserve: for being likable but shy and thin-skinned, and not at all comfortable with the personal impact of having created a modern myth." She is described by a friend as "uncomfortable in a room full of adults" and wary "of situations you can't always control — in the real world" and by a former teacher as bright but "not exceptional."

Out in the real world – Rowling's office – Parker describes his initial impression of the author of heroic exploits by noting, "Her V-necked sweater was pushed up at the sleeves to show freckled arms. She appeared to be wearing false eyelashes and rather heavy foundation." He says of their conversation: "There was a stiffness to the transaction, but she was not unfriendly." You get the sense that a woman like Rowling ought to manifest in a perfect ball of light or something, and anything less is a comedown. He later reveals, "Her discomfort with fame can give her the air of being more caught up with the idea of her celebrity than those she’s addressing."

If you can attempt to read the New Yorker story with a modicum of empathy for a very rich, famous woman with legions of obsessive fans and a British press that's hacked her phone and camped outside her door, Rowling comes across as a human being who happens to be just as shy and vulnerable as, say, a writer. Imagine – a novelist who admits, "I’m not a natural joiner." And it's true that she seems to be holding back from the gusher of personal revelations we've come to expect in the celebrity profile. But perhaps a woman whose dad, as Parker reveals, would sell off the first-edition copy of "Harry Potter" she gave him for Father's Day, might have some trust issues.

Parker's ambivalence toward the author – and her work – are clear. He tepidly declares that the Potter books simply "validate the concerns of ordinary children" and similarly notes, "'The Casual Vacancy' will certainly sell, and it may also be liked. There are many nice touches." It's certainly a bracing change of pace from the butt-smooching M.O. of a typical Vanity Fair piece, but it comes as strangely petulant. Immature, even.

Maurice Sendak was notoriously cranky. Harper Lee has spent the vast majority of her life as a famous recluse. And L. Frank Baum, a man who created one of literature's other great wizards, was in favor of exterminating the Native American population. He was not great and powerful. He was a flawed individual whose gift was for pulling the strings, in much the same way that Parker describes Rowling: as "an author, at a desk, making decisions about who should live and who should die."

J. K. Rowling is not Hermione Granger or Minerva McGonagall or even Bellatrix Lestrange. She never said she was. She never promised to stay at Hogwarts forever. She is, behind the curtain, just a person, one who happens to have created a fantastic world but who remains stubbornly life-size. "I'm a writer," she says. "And I will write what I want to write." Why isn't that enough?