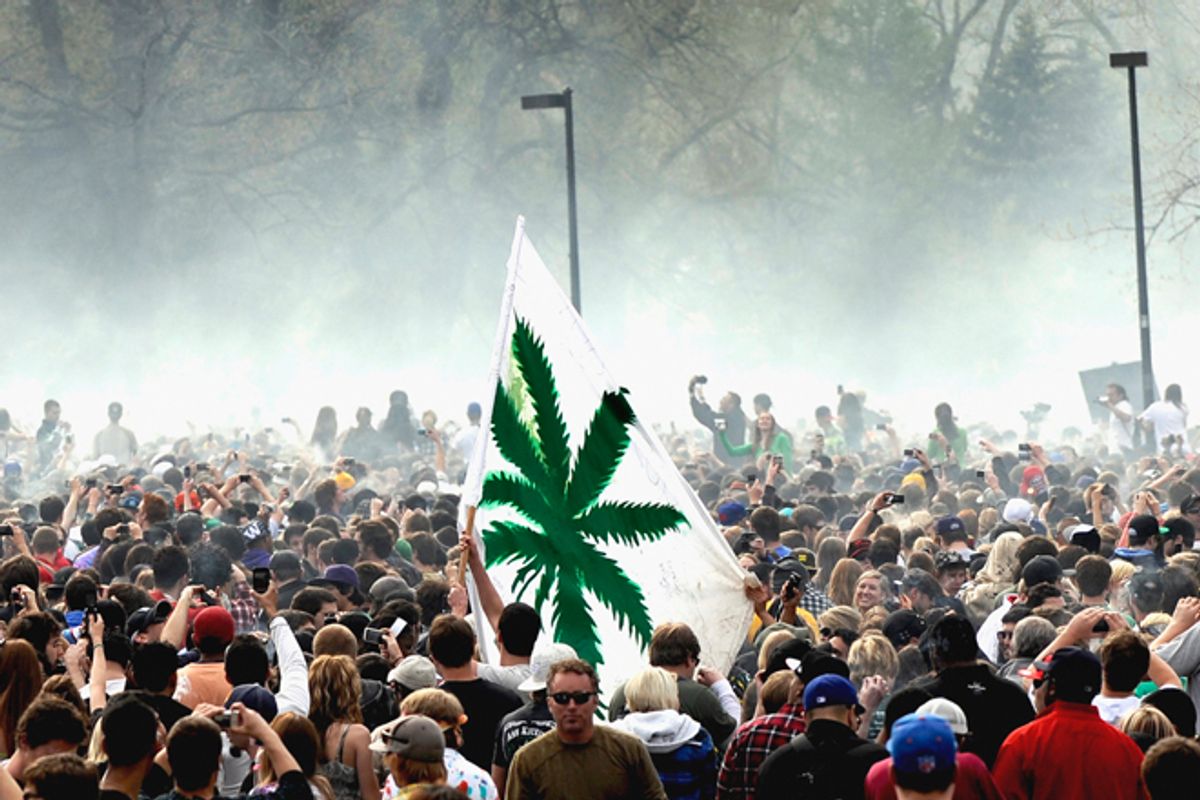 At the first presidential debate in Denver tonight Barack Obama and Mitt Romney will square off over a list of domestic issues designed to appeal to voters in key swing states like Colorado. But one issue that just might play a pivotal roll in the race in that state, and the country, will almost certainly go unmentioned.

Colorado has some of the most liberal medical marijuana laws in the country with more than 100,000 registered patients who can legally buy pot at hundreds of dispensaries. On the ballot in November is Amendment 64, an initiative that would make it legal for any adult over 21 to possess up to an ounce of pot.

Both candidates oppose pot legalization -- Obama has been accused of waging a "war on pot," and Romney is even less weed-friendly -- but the issue seems to be steadily gaining support in this battleground state. Public Policy Polling surveys over the summer showed the ballot initiative leading by a 47-38 margin in July and August and a Denver Post poll in September showed the lead had grown to 51-40. Analysts say there is no guarantee Colorado will vote for legalization, but if it does, it could be a critical boost for Obama.

Why? Polls show voters under 35 favor legalizing marijuana 2-to-1. No surprise, polls also show young voters are half as likely to vote for Romney, which means if marijuana spurs more young people to the voting booth, Obama could get the political equivalent of a contact high.

“This might be a presidential race they are bored with and might not otherwise vote, but if marijuana gets them to the polls, it will favor Obama 2-to-1,” said Floyd Ciruli, a political analyst in Denver. “The question is how many it will turn out. We don’t know. But all of the indications are that this will be a very close race, so a few thousand extra young voters for Obama could be significant.”

Call it the bud bump. It wouldn't be the first time a single issue has swayed an election. In 2004, George Bush won the make-or-break swing state of Ohio by a 2.1 percent margin. On the ballot that year was a ban on gay marriage. Everyone from Karl Rove to the New York Times credited the measure with bringing out conservative “values voters” who tipped the tight race to Bush.

No one knows for sure if value voters made the difference. “We have scant evidence ballot issues can sway an election,” said Daniel Smith, a professor of political science at University of Florida. And while studies show galvanizing issues on the ballot can help frame elections, researchers are not certain that they significantly boost turnout. “A much bigger factor is just being a battleground state,” he said.

Neither party has embraced legalizing pot as a winning strategy, Smith said. “The bump only works when a candidate has real ownership of an issue and no one wants this issue.”

Still, you have to figure any increase in young voters will help the relatively hip and youthful Obama, who admitted to smoking a little pot in high school, over his tight-laced opponent, who avoids even coffee.

Three other initiatives in the state that might have rallied conservatives for Romney (carrying a concealed weapon without a permit, banning gay marriage and defining a fetus as a person) failed to get on the ballot. Which means if the bump exists, it will probably bump toward the Democrats.

Dave Philipps, an award winning journalist based in Colorado Springs,, is author of "Lethal Warriors: War, Murder, and the Fight to Save a Generation on the Home Front. (Palgrave).