Your comprehensive, real-time fact check of the first presidential debate 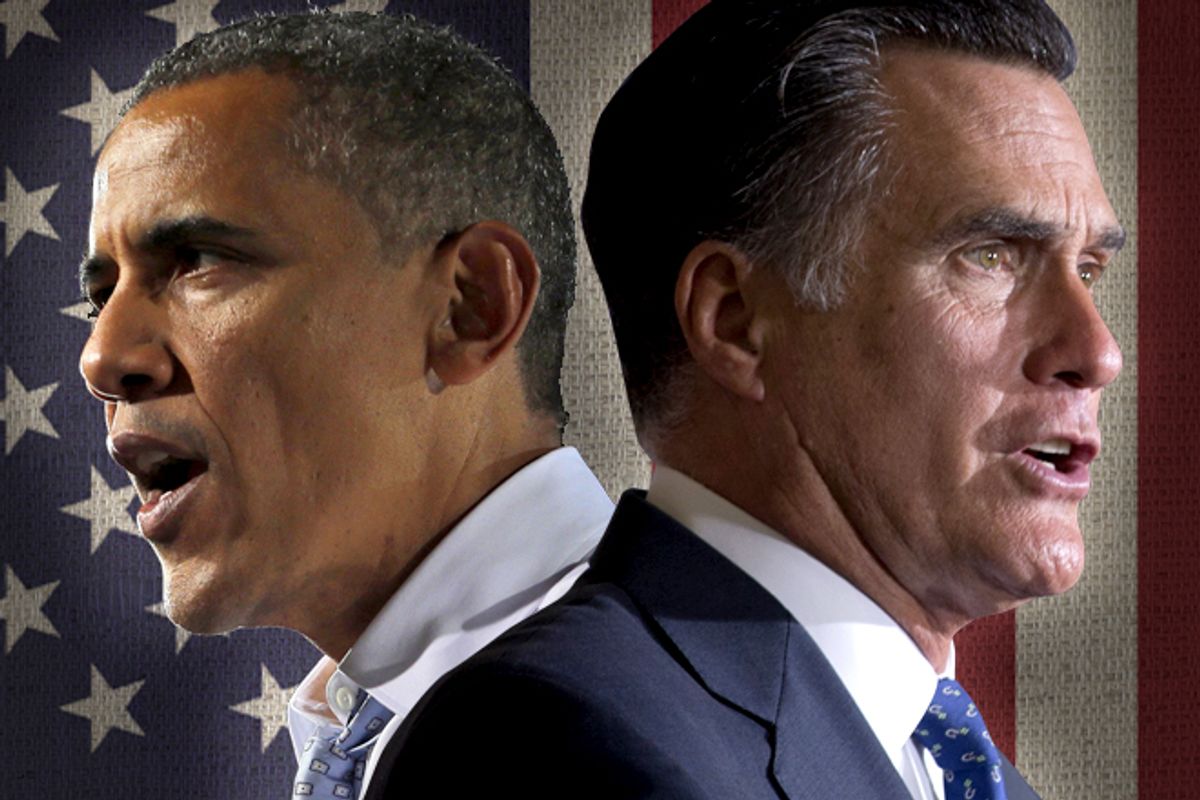 Tonight's presidential debate will feature plenty of talk about the economy, healthcare and the role of government, but if it's anything like every other political event ever anywhere, it will also feature plenty of exaggerations, mistruths and outright lies. We'll be calling them out real-time and bring you the, you know, facts, so refresh this page often to stay up-to-date.

10:45 -- Big Bird is tiny: Mitt Romney says he'd help bring down the deficit by cutting PBS and "Big Bird." PBS receives about $445 million from the federal government, which represents about .01 percent of the federal budget.

10:20 -- Romney left his heart in Zurich: Romney tells Obama, "The place you put your money is a pretty good indication of where your heart is.” The obvious rejoinder, ready-made for a DNC attack ad, is that Romney's heart must be in the Cayman Islands, Bermuda or Switzerland, where Romney has put his money.

10:00 -- Romney sees death panels: Romney comes dangerously close to invoking death panels, saying Obamacare has “a board that will tell people what kind of treatment they’re going to get.” He’s referring to IPAB, a board of doctors, hospital officials and government officials who try to find best practices to reduce the cost of Medicare (and only Medicare -- no one else's healthcare -- which is already a government plan). IPAB does not decide on individual cases, is subject to congressional oversight and is legally prohibited from rationing care. In August, Paul Ryan told Florida seniors Obamacare has a "rationing board."

9:45 -- Obamacare still doesn't cut Medicare: Romney revived one of the most repeated falsehoods of the campaign -- that Obamacare cut over $700 billion from Medicare. It’s not true, and Paul Ryan’s budget included the same cuts; Ryan and almost every other Republican in the House voted for them. Obamacare did cut funds from Medicare, but from providers, not beneficiaries. The actuaries in charge of the program say the savings will actually extend the life of the program and experts say the cuts won’t affect benefits.

9:40 -- NFIB fib:  Romney uses as a cudgel against Obama's tax plan a study from the National Federation of Independent Business. The NFIB sounds like an anodyne business group, but like the U.S. Chamber of Commerce it is actually a very partisan Republican group funded mostly by large corporations, not small businesses.

9:20 -- Romney's curious studies: Responding to Obama's waving around the Tax Policy Center Study, Romney said there are five other studies that show he's right. The problem with this is some aren't studies (Wall Street Journal Op-Eds are not studies) and others are by economists advising his campaign.

9:15 -- Romney still can't explain his tax plan:  One of Mitt Romney’s core economic policies is a 20 percent tax cut for all Americans, which economists estimate will cost about $5 trillion over 10 years. Nonetheless, tonight Romney said,“I don’t have a $5 trillion tax cut.” What he means is that the net cost of his plan will be zero because he’ll find ways to raise $5 trillion to make up for lost revenue by closing loopholes and expanding the tax base. He wants “no tax cut that adds to the deficit,” as he said tonight. The problem with this is he won't say how. In a much-cited study, the nonpartisan Tax Policy Center found that there’s no way this is possible without significantly raising taxes on the middle class, which Romney also says he’s not going to do.

The Romney campaign has disputed that study and others that came to similar conclusions, but has so far refused to offer details as to how they would pay for the tax cut. Paul Ryan said Sunday that it would take too long to explain the math. Romney came a little closer last night by saying he would cap deductions rich people could take by $17,000, but it’s still unclear that this would be enough to cover the cost of his plan.