What do Westgate Resorts' David Siegel and Jamie Dimon of JPMorgan have in common? Hopeless entitlement 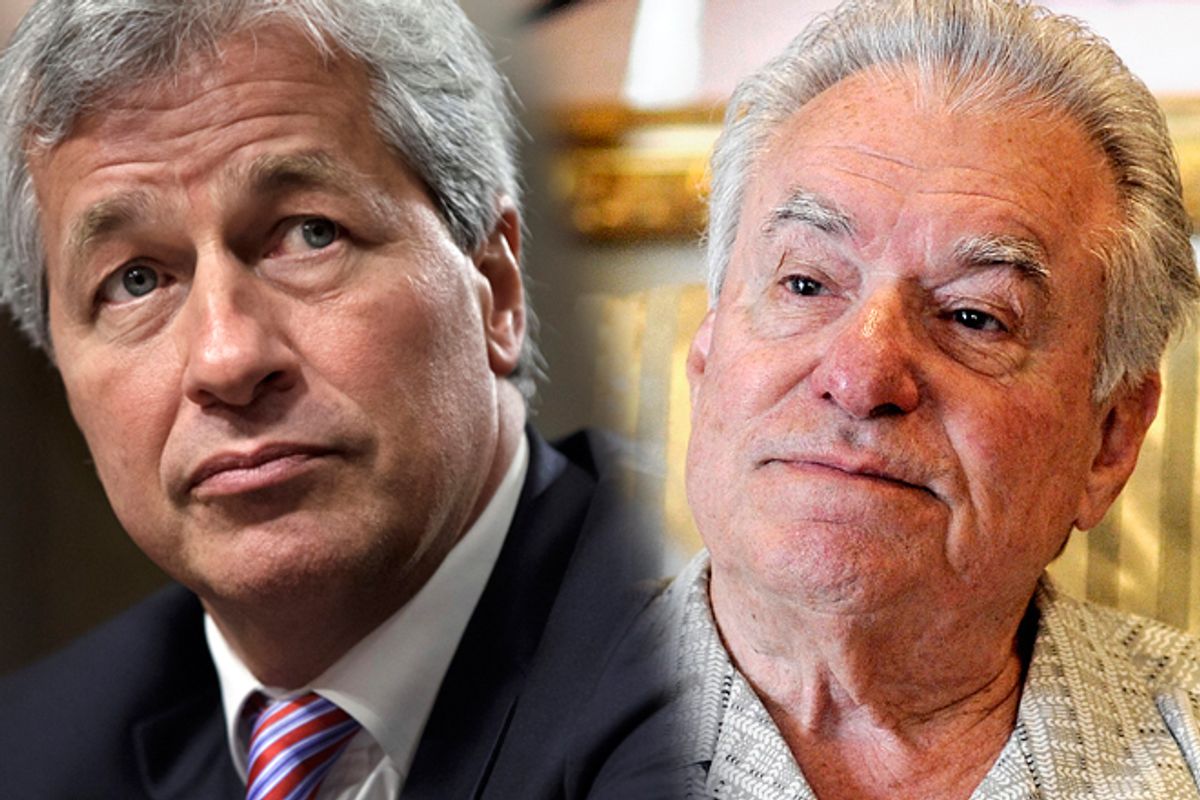 America's worst people, after the murderers and rapists, are obviously our CEOs, as any child could tell you. Over the past few years, they have not stopped complaining about how mean everyone is being to them even though they have been earning, on average, a zillion times what their average employee makes. (Or, OK, between 231 and 380 times.)

One CEO who is already famous for being cartoonishly awful in every conceivable way is David Siegel of the real eastate and timeshare company Westgate Resorts. You may know him as the guy who tried to build the country's biggest house, which became the subject of a recent documentary film. (Our Andrew O'Hehir describes him as "self-pitying, endlessly aggrieved" and "a vulture feeding on the dreams of vulnerable people.") Siegel is a Republican, and he sent a letter to all his employees strongly suggesting that if Obama wins he will be "forced" to lay everyone off.

So where am I going with all this? It's quite simple. If any new taxes are levied on me, or my company, as our current President plans, I will have no choice but to reduce the size of this company. Rather than grow this company I will be forced to cut back. This means fewer jobs, less benefits and certainly less opportunity for everyone.

So, when you make your decision to vote, ask yourself, which candidate understands the economics of business ownership and who doesn't? Whose policies will endanger your job? Answer those questions and you should know who might be the one capable of protecting and saving your job. While the media wants to tell you to believe the "1 percenters" are bad, I'm telling you they are not. They create most of the jobs. If you lose your job, it won't be at the hands of the "1%"; it will be at the hands of a political hurricane that swept through this country.

You see, I can no longer support a system that penalizes the productive and gives to the unproductive. My motivation to work and to provide jobs will be destroyed, and with it, so will your opportunities. If that happens, you can find me in the Caribbean sitting on the beach, under a palm tree, retired, and with no employees to worry about.

(What is sort of confusing about this is that Siegel's company nearly went under following the 2008 crisis -- which happened under a president he claims he helped to get elected -- and he now claims to be profitable again, after four years of a president he hates. Getting this president out of office doesn't seem to be the rational response. Though it's not that that confusing when you remember rich people are just as idiotic about politics as anyone else, despite what our news media always insists.)

Yes, this is repulsive. It is loud, dumb bullying by a gross self-parody of the modern American executive class. It's also pretty silly! I mean, as an employee of Mr. Siegel, you would have to be pretty easily swayed to find this letter persuasive. (What if Obama loses Florida but wins the election? Is everyone still fired even though it's not their fault anymore?)

No, what's more insidious, to my mind, is the much quieter way our supposedly most "respectable" and "moderate" members of the CEO class exercise their influence. The best example of this is not some loud-mouthed open letter from a Trumpian, colossal-idiot clown, but the savvy bipartisanship of Peter Peterson, with his never-ending money hose aimed squarely at Washington nonprofits and think tanks and his ability to get nearly the entirety of the objective political press to subscribe to his world view. Peterson and his ilk are devoted to Solving America's Least Pressing Problem, the federal deficit, in the least popular fashion possible.

And look who's headed to Washington after the election to "fight for a grand bargain": the Wall Street executive class! Jamie Dimon, head of massive multinational megabank JPMorgan, and Lloyd Blankfein, head of the embodiment of everything rigged and broken about global capitalism that is Goldman Sachs, are joining forces to Fix America. Aren't we so lucky to have them?

Politico has the story:

Dimon, Blankfein and others have signed onto a multimillion-dollar ad campaign to build public support for a deal. And CEOs are also lobbying senior lawmakers and their aides to find a solution.

What sort of "deal"? Just the one hated by everyone besides moderate Senators, pundits and corporate executives:

Both Romney and Obama are widely viewed in corporate America as likely to support a deal roughly along the lines of the Bowles-Simpson commission recommendations that will include trims to Social Security and Medicare and new revenues beyond just increased taxes for the wealthy. Corporate America would also like to see such a deal include a lower overall corporate rate and changes to the taxation of overseas profits. But those things are not viewed as prerequisites for widespread corporate support of a deficit reduction deal. The executives also want a mechanism put in place in the lame-duck session to extend current tax policy and delay the $1 trillion in sequester spending cuts scheduled to go into effect in January while forcing action on a sweeping plan next year.

So cutting Medicare and making vague changes, set to take effect decades from now, to Social Security for some reason, in exchange for ... allowing the expiration of tax cuts that are already set to expire while cutting corporate taxes. That's the hugely important deal corporate executives are seeking, and we are supposed to be very proud of them for being willing to possibly acquiesce to minor income tax increases in exchange for a further shredding of the tattered remains of the American welfare state.

Of course these executives are at least smart enough to realize that their preferred outcome is equally likely to happen under either presidential candidate as long as they get those damn Congressional Republicans in line. And once we have promised to stop being so generous with healthcare for old people, Wall Street will get back to work "creating jobs" with arcane financial transactions designed to milk every last cent from our drowning debtor class and to deliver it to our heroic, Randian creditors!