Foreign policy: Is Mitt running as Dubya or Obama -- or both?

Will Mitt Romney's foreign policy resemble Obama's or Bush's, or both? He probably doesn't know himself 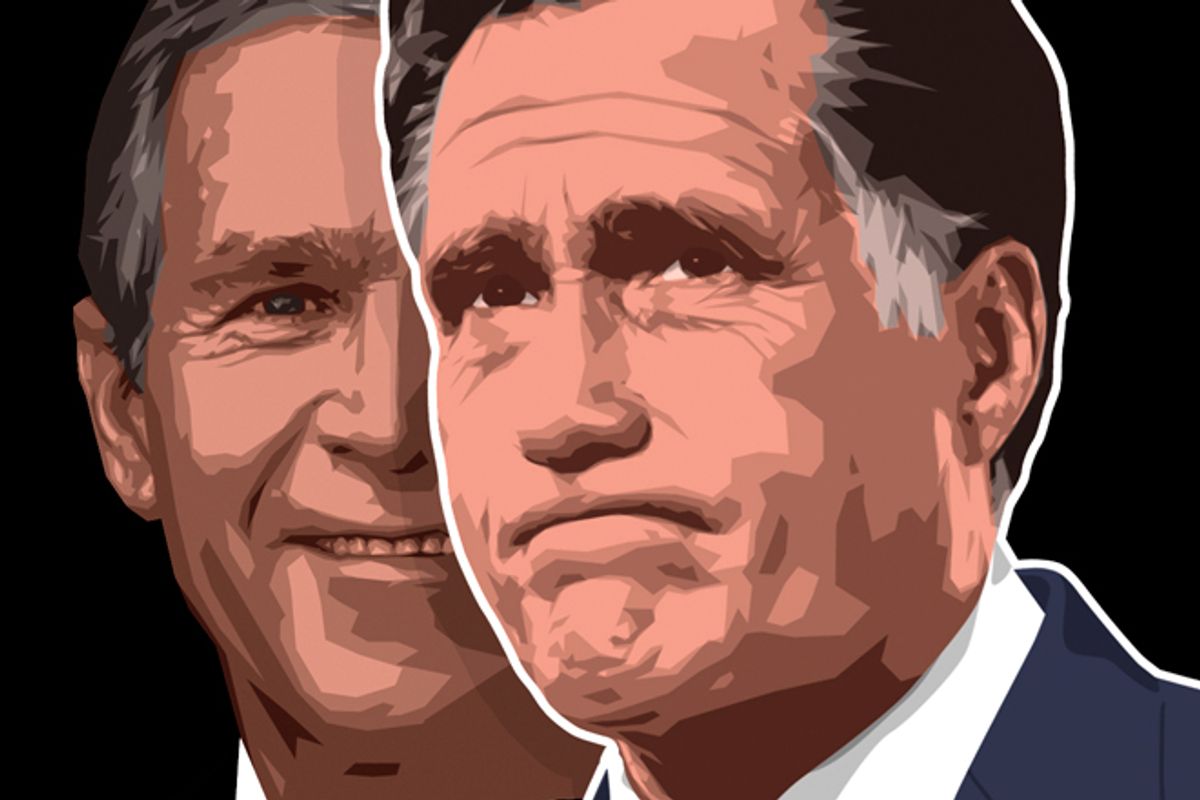 “No one anywhere, friend or foe, will doubt America’s capability to back up our words.”

“We will back up our words with actions.”

The first quote is from a speech on foreign policy Mitt Romney delivered in early October at the Virginia Military Institute.  The second is from a policy meeting between George W. Bush and leaders of Lebanon.

Much as Romney is trying to distinguish himself on foreign policy, the fact is that if Barack Obama and George W. Bush had a foreign policy love child, it would be Mitt Romney. Rhetorically, Romney sounds almost exactly like George W. Bush.  In terms of what he’d do on the ground in places like Iran and Syria, Romney sounds exactly like Barack Obama.  So what will Mitt Romney do on foreign policy if elected?  As with everything else about Romney, he’s so mercurial it’s impossible to know.  But the signals are ominous.

It has been extensively reported that over 70 percent of Mitt Romney’s foreign policy advisors are veterans of the Bush Administration. That's especially troubling given that Romney has little foreign policy experience and if elected will be over-reliant on unreconstructed neocons.  And yet in statement after statement, Romney, while he talks tough like Bush, for practical purposes actually hews to Obama’s foreign policy.  This is the outgrowth of a shift within the Bush Administration itself, which in its second term confronted the reality a public deeply wary of its neoconservative brand of cowboy interventionism.  Today, over half of Republicans believe the war in Afghanistan is not worth fighting.  And since, as James Lindsay from the Council on Foreign Relations puts it, “Obama’s foreign policy resembles George W. Bush’s second term,” to distinguish himself from Obama’s popular and effective leadership in this area, Romney has to rattle his saber further to the right.  And yet actually running on a more aggressive, neo-conservative foreign policy agenda wouldn’t sit well with voters even within his own party.

Unlike other issue areas, where Romney’s mushiness seems to be the result of disorientation from switching positions so frequently, on foreign policy Mitt Romney is purposely being deceptive — and intentionally leaving the details open, presumably for his neoconservative-dominated advisors to fill in if he’s elected.  And that’s where the concern lies.

In his speech before the United Nations in 2002, trying to coerce international support for an invasion of Iraq, George W. Bush infamously resorted to ominous but ultimately incorrect fear mongering about Iraq’s attempts to create a nuclear weapon and then declared, “Saddam Hussein's regime is a grave and gathering danger.”

Regarding Iran, in his VMI speech on foreign policy, Mitt Romney said, “Iran today has never been closer to a nuclear weapons capability,” despite mixed intelligence assessments at best as to the state of Iran’s nuclear program.  Yet, Romney declared, Iran has “never posed a greater danger to our friends, our allies and to us.”  Similar shaky intelligence, similar chest-thumping on danger, similar loose talk of war?

No, no, in spite of the fact that Romney wants to extend the economic policies of George W. Bush and re-employ most of his foreign policy team, Romney insists that he is not George W. Bush.  So how does he try to prove this?  By echoing almost every one of President Obama’s foreign policy strategies.

On Afghanistan, Romney says he would heed military commanders’ advice and implement a “real and successful transition to Afghan security forces by the end of 2014.” That matches Obama’s exit timeline.

On Iran, after trying in vein to draw distinctions, Romney admitted he has the same “red line” as President Obama.  And Romney says he would toughen and tighten sanctions, but President Obama has already worked to impose the toughest sanctions on Iran ever — including winning the support of China and Russia to do impose such restrictions.  Since Romney calls Russia America’s “number one geopolitical foe” it’s hard to imagine he could achieve as much.

And Romney says he would increase pressure on Iran by restoring a “permanent presence” of U.S. aircraft-carrier task forces in the eastern Mediterranean.  Good idea!  In fact, there’s already two there today under President Obama.

On Syria, Romney says he’ll “identify and organize those members of the opposition who share our values and ensure they obtain the arms they need” — which is what the Obama Administration is already doing.

In fact, the few foreign policy proscriptions Romney has provided are so similar to Obama’s that noted foreign policy journalist Spencer Ackerman accuses Mitt Romney of simply running to complete President Obama’s second term — rather than running with his own international agenda.

And yet Mitt Romney continues to tongue lash President Obama for deigning to implement the foreign policy agenda that Romney has outlined.  The organizing theme for Romney’s critique is that President Obama is “leading from behind”.   The only way to square the circle of Mitt Romney’s outlandish rhetoric with the reality of his Obama-2.0 foreign policy proclamations is to assume, or at least justifiably worry, that Romney isn’t showing voters all of his cards — a rather reasonable assertion given Romney’s inability to provide details on everything from his tax plan to his own tax filings.

Romney may so far only distinguish himself on tone, but tone matters.  After all, President Obama campaigned on a far more hope-and-change anti-war type foreign policy than he has enacted in office, with stepped-up drone strikes and secret military tribunals.

So if we extrapolate Romney’s rhetoric, what would “leading from the front” look like?  From George W. Bush’s national security strategy:

While the United States will constantly strive to enlist the support of the international community, we will not hesitate to act alone, if necessary, to exercise our right of self-defense by acting pre-emptively against such terrorists to prevent them from doing harm against our people and our country.

Or, in Romney’s words:

I believe that if America does not lead, others will…. I am running for President because I believe the leader of the free world has a duty, to our citizens, and to our friends everywhere, to use America’s great influence—wisely, with solemnity and without false pride, but also firmly and actively—to shape events in ways that secure our interests.

Romney’s is a foreign policy rhetoric based on the idea that America is great and should lead the world — even if that means going it alone in the international community, the same neoconservative American exceptionalism peddled by Bush.  Meanwhile, Romney’s actual foreign policy positions (so far) are merely distinguished from President Obama’s in that Mitt Romney just thinks he’s more exceptional.  Which is not much to run on, let alone lead with.