Breitbart.com has one whopper of a theory as to why the New Jersey governor has praised Obama so effusively 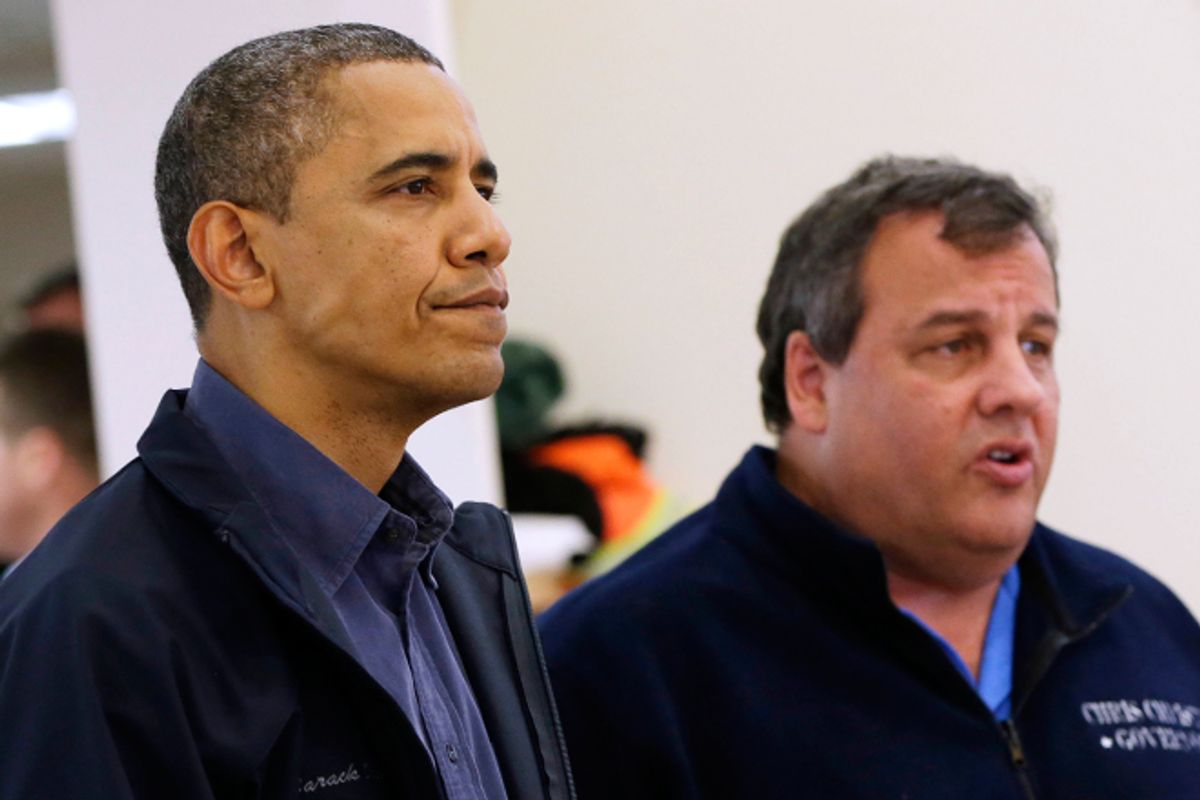 As you've probably seen, New Jersey Gov. Chris Christie -- a prominent Republican and Romney endorser -- has recently repeatedly praised President Barack Obama for his and the federal government's response to Hurricane Sandy. Christie has likely done this because ... he is grateful and the federal government has been helpful, but the political press needs stuff to write about, so people have written about it as a political act.

Most conservatives are just sort of ignoring this development, as liberals gleefully publicize pictures of the men joining together to inspect the damage along the Jersey Shore and compliment each other for the cameras. But some are weighing in. Here are the conservative explanations for Chris Christie's recent effusive praise of Barack Obama: The Daily Caller's Matt Lewis says the force of Christie's praise is suspect: "The issue here is about the degree to which he is going out of his way to help Obama politically — and the context of the timing." He thinks this indicates a personal schism between Christie and Romney.

But my favorite explanation comes from genius political analyst Joel Pollack at Big Government, one of the increasingly easily ignorable stable of dumb blogs and lie-generation machines founded by the late Andrew Breitbart.

Here is Pollack's theory: Christie is praising Obama because Mitt Romney is so far ahead that it doesn't matter.

But the truth about Christie’s outreach to Obama is blindingly obvious: Mitt Romney is now running away with this election, freeing Christie to praise the president without fear that doing so will tip the scales.

Oh. I see! But ... aren't all the national polls essentially tied? Yes, but you forgot about skewing.

Romney’s lead in the national polls may appear small, but it is likely much more significant, since the electorate that shows up on Tuesday will include proportionally fewer Democrats than most polls have assumed thus far.

Oh. I see! (There aren't any links to anything in that paragraph btw.)

Now that Obama is on defense in blue states such as Pennsylvania, Minnesota, Oregon and Michigan, a Romney victory is within reach.

Haha sure. OK. The evidence that Obama is losing Ohio is one Rasmussen poll -- the only poll showing Romney leading in Ohio, by the way -- and the "ground game" link is just a Robert Stacy McCain blog post about how he met an excited Romney canvasser and went to an Americans for Prosperity event.

Also Obama's visit to New Jersey "merely highlights the fact that he abdicated that leadership on 9/11."

In conclusion, Chris Christie was really nice to Barack Obama because all conservatives secretly know that when you unskew the polls Mitt Romney is winning in all swing states, the end.