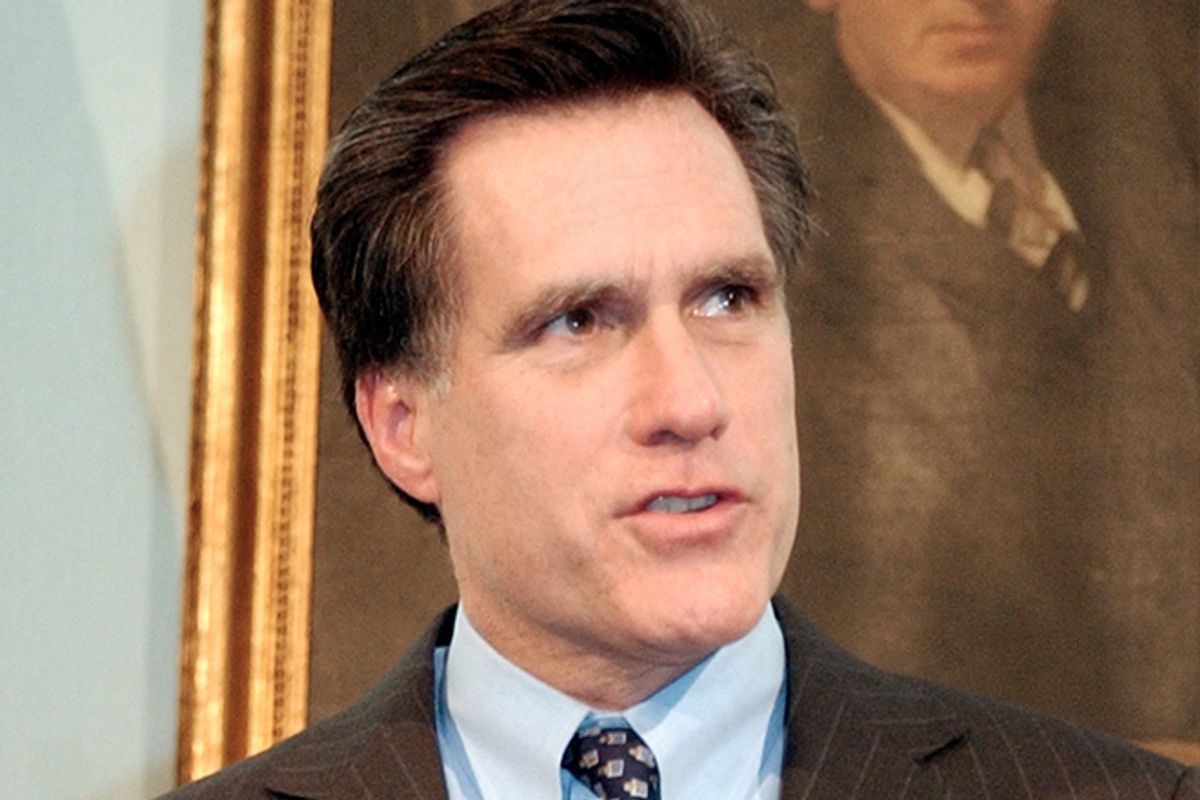 So Mitt Romney doesn’t want to eliminate FEMA anymore, but he definitely still wants to give the states more responsibility for their own security. “States should be in charge of emergency management in responding to storms and other natural disasters in their jurisdictions,” is his current position, according to a spokesperson. As we’ve noted, states already play the primary role in responding to natural disasters and adding to their responsibilities would prove difficult, since budget-strapped states simply don’t have the resources needed to respond to major disasters.

Romney himself understood this very problem when he chaired a little-noticed advisory council on homeland security in 2004.

As the federal government was rearranging its security apparatuses in the wake of the Sept. 11 terror attacks, President Bush created the Homeland Security Advisory Council to advise the newly created Department of Homeland Security. Mitt Romney, then the governor of Massachusetts, served as chairman of the State and Local Officials Senior Advisory Committee, and in June 2004 was selected to chair a working group studying how the federal government could best work with state, local and tribal authorities on intelligence and counter-terror activities.

Romney’s role on the advisory committee seems to have gone entirely unnoticed by the media during this election cycle, except by the Huffington Post’s Andrea Stone, who mentioned the council in a comprehensive look at Romney’s stance on domestic spying in May. Stone reported that through the council Romney was “instrumental” in creating “fusion centers,” the post-9/11 intelligence hubs where law enforcement from various tiers of government share information. The centers have become highly controversial in recent years; a two-year-long investigative Senate report released earlier this month found them to be “pools of ineptitude, waste and civil liberties intrusions,” as the Washington Post summarized the report in its headline.

But there’s a different part of Romney’s committee work that’s more relevant to today’s debate on federalism and disaster response. The final report, released in December 2004, details why it is “critical” that state and local authorities coordinate their effort with federal officials. Most of the report lays out common-sense recommendations and focuses on sharing information in ways that didn't happen before 9/11.

“We must also proceed thoughtfully and consider all of the implications before asking already heavily burdened state, local, tribal and private sector entities to take on new responsibilities without the appropriate level of federal funding.”

So in 2004, before he was severely conservative Mitt Romney and when he was Massachusetts moderate Mitt Romney, he understood exactly why doing something like eliminating FEMA would be a bad idea. Yes, the report focused on counterterrorism, but there is significant overlap in strategies used to prepare for, and resources used to respond to, a terror attack or natural disaster (there’s a reason FEMA is housed within the Department of Homeland Security). And the challenges of federalism are the same whether you’re trying to coordinate efforts to thwart terrorists or evacuate lower Manhattan.

A year later, Romney expressed similar sentiment when he criticized the federal government's botched response to Hurricane Katrina. In September 2005, Romney appeared on Sean Hannity's show on Fox News and said he agreed with Bush that FEMA's response “was unacceptable.” He also had plenty of criticism for the governors of Louisiana and surrounding states -- for not asking the federal government for help fast enough, saying they should have asked for federal help on Aug. 26 instead of 28.

It’s curious that, this year, Romney hasn’t touted his role on the Homeland Security advisory committee to bolster his thin resume on national security. He did during his 2008 presidential bid. “And that's what I've spent my time doing as the governor over the last four years and serving on the Homeland Security Advisory Council, and that means intelligence and counterterrorism,” he said in a Fox News GOP primary debate in May 2007.  Why he’s buried this chapter is a mystery that may not be solved before Election Day.