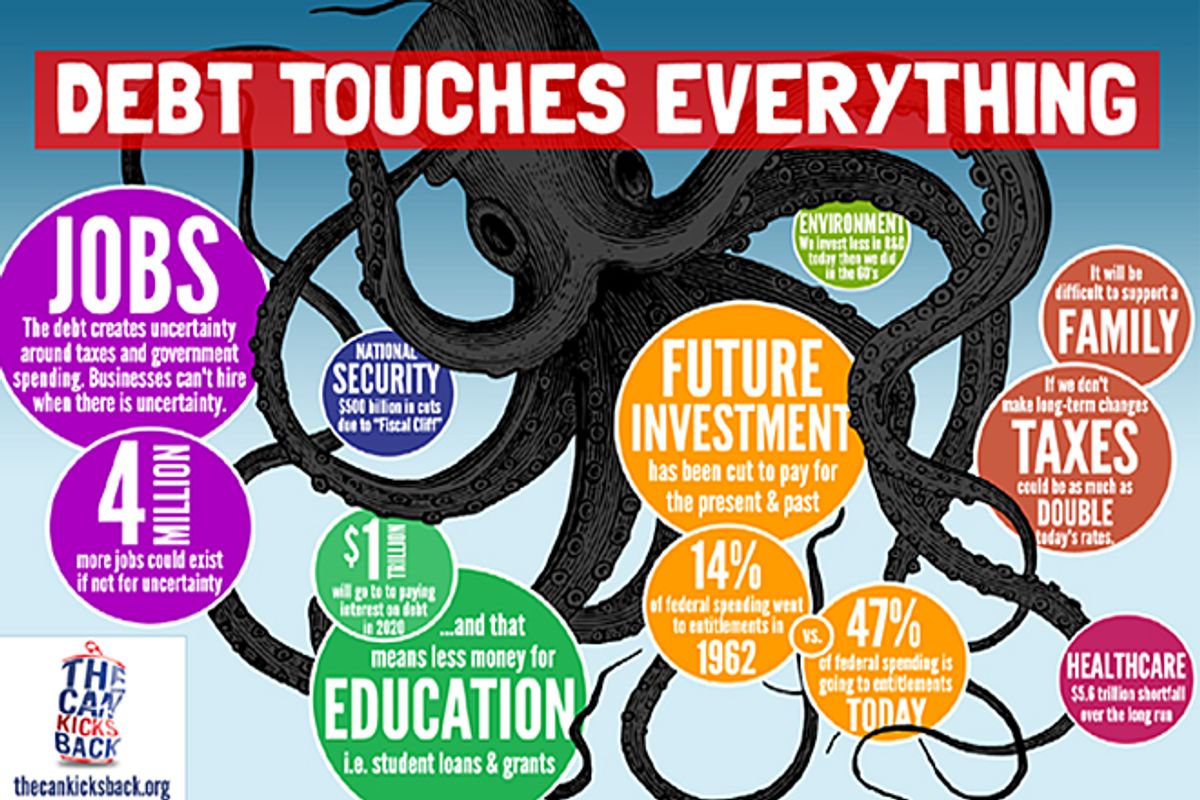 Some inspiring news for these often dark times: A group of young activists is making headlines for their fight against debt. It is good to see "The Youth" getting involved, and obviously crushing consumer and student loan debt is deeply hurting a generation already disproportionately harmed by the Great Recession.

Haha, just kidding, they are actually getting headlines because they're launching a campaign about the federal debt. Because, you know, that is a thing kids care about. Let's meet these do-gooders, courtesy of Suzy Khimm at Ezra Klein's respected "WonkBlog."

A group of young deficit hawks is making it their mission to warn the Millennial Generation about the dangers of an out-of-control deficit through a new organization called the Can Kicks Back. “The debt is now the top of line issue for most young people. We believe it’s the most important issue,” said Ryan Schoenike, president of the group. “Not addressing this issue leads to a lower situation — higher taxes, less jobs, more debt.”

Oh Ryan. The federal debt is not "the top of line issue for most young people." That is a weird lie.

The group is launching a grass-roots effort to get Millennials to call members of Congress to push for a grand bargain, pushing the message through online advertising and partnerships with groups such as Fix the Debt, which has rallied CEOs. (The name “the Can Kicks Back” is a reference to the criticism that lawmakers have simply “kicked the can down the road” on the deficit.) Led by twenty- and thirtysomethings, the effort has the potential to put a more youthful face on the anti-deficit movement, which has often been identified with octogenerians like Alan Simpson and Pete Peterson.

Octogenarians like Alan Simpson -- who is in fact on the Can Kicks Back's "board of advisers." He is joined on that board by beloved millennial dreamboats Erskine Bowles, Evan Bayh and former comptroller David Walker.

Now I don't want to alarm you, but there is some evidence that this is not quite the spontaneous grass-roots movement of young deficit hawks that it appears to be. The Can Kicks Back is run by Ryan Schoenike and Nick Troiano. Those two were also involved in the "Draft David Walker" campaign, a doomed attempt to build a groundswell of support for Walker to run on the ballot lines purchased by the idiot millionaires behind Americans Elect. The Can organization's address is the same as that of the New America Foundation, a pro-entitlement reform think tank funded by the Peter G. Peterson Foundation. Also at that address: Fix the Debt. You can probably guess what that particular "grass-roots" group is about.

All of these organizations are part of the decades-long campaign by single-minded rich person Pete Peterson to convince Americans that they should give up their Social Security and Medicare to "fix the debt." (Or as the Can Kicks Back puts it, "F#% THE DEBT." Radical, dudes! Let's lower rates, eliminate loopholes and chug some brews!) Peterson has probably spent a billion dollars, over decades, starting and funding dozens of organizations dedicated to pushing deficit reduction via entitlement cuts. This new "millennial"-themed organization is not even his first "pretend youth group" attempt. In 1993, he founded "Third Millennium." In 1992 he founded "Lead ... Or Leave."

All of these organizations get a great deal of media attention, because after years of relentless deficit scolding, Peterson has successfully won over pretty much the entirety of the Beltway press to his point of view. (Most political journalists see advocating for deficit reduction as "common sense" and moderate, not as "biased" or political.)

In the short term the debt is completely harmless. In the medium term it's harmless! I guess eventually if it is a problem we can raise some taxes on people and buy fewer billion-dollar war airplanes that don't work. (Also single-payer healthcare, for everyone.). But that is a debate we can have when Americans have jobs and money again. In the meantime, actual real-life young Americans need jobs. Some of them need help paying for college. Many need health insurance. And all of them who get old will want to retire. What would not help them, in any way, is the Peterson deficit reduction plan, which has essentially remained the same for many years now. It is written entirely in vague code, but it basically involves raising the retirement age for Social Security and Medicare and, for some reason, lowering taxes. Yes, lowering them. The only thing The Kids Today love more than Instagramming their Facebooks is "comprehensive and pro-growth tax reform, which broadens the base, lowers rates, raises revenues, and reduces the deficit," right? #YOLO.