Jailer: Bradley Manning needed to tell me he wanted out of solitary 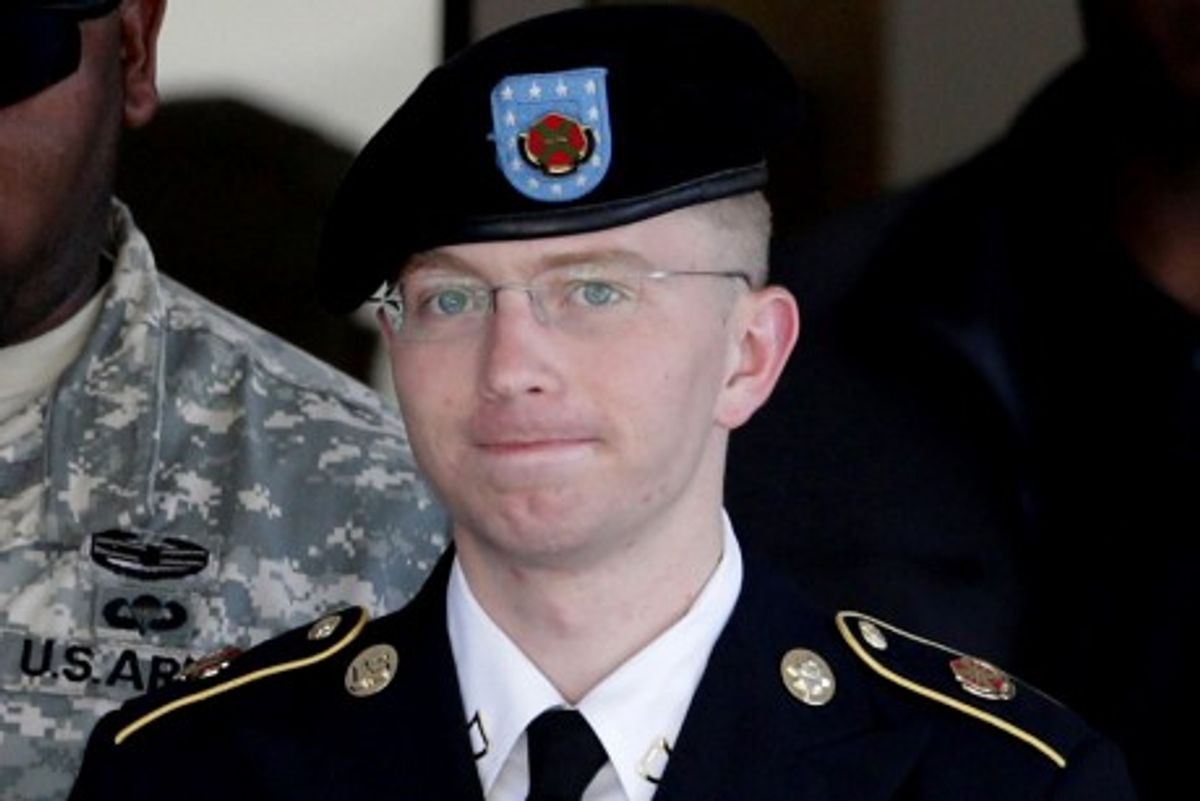 An Army private charged with sending reams of classified documents to the anti-secrecy website WikiLeaks could have gotten his tight pretrial confinement conditions reduced by clearly explaining why he wasn't a suicide risk, the former commander of a Marine Corps brig testified Friday.

When Pfc. Bradley Manning did speak up, his crack about hanging himself with his underwear only heightened the concern for his safety, Chief Warrant Officer 2 Denise Barnes said, so she ordered him to be stripped naked each night.

"There was never an intent to punish Pfc. Manning," she testified for the prosecution at a pretrial hearing.

Barnes said she didn't consider Manning's comment in early March 2011 serious enough to warrant placing him on suicide watch but "I felt that I needed not to take that comment lightly, and I didn't."

Barnes testified on the ninth day of a hearing to determine whether Manning's nine months in maximum custody at the base in Quantico, Va., amounted to illegal pretrial punishment. He was always on either suicide watch or injury-prevention status and Manning claims the conditions were so harsh that the charges, including aiding the enemy, should be dropped.

Barnes was the 11th government witness to testify at the hearing, which is scheduled to end Wednesday. She was the brig commander during the final three months of Manning's stay at Quantico, before he was moved to medium-security pretrial confinement at Fort Leavenworth, Kan.

Manning was required to surrender his underwear each night from March 2 to April 20, 2011, when he was moved to Leavenworth. He had only two blankets to cover himself the first seven nights, until he was issued a suicide-prevention smock, Barnes testified.

On the day after losing his underwear, Manning stood at attention naked for morning count. He testified that a guard ordered or implied, that he should put down a blanket he was using for cover. News of the incident heightened worldwide interest in his case.

Barnes testified Friday that the brig staff told her nobody ordered Manning to stand naked.

"We don't encourage that," she said.

The Marine Corps' chief of corrections, Chief Warrant Officer 5 Abel Galaviz, testified Wednesday that Barnes' order to remove Manning's underwear was improper because she didn't also place him on suicide watch. Lt. Col. Troy Wright, a law enforcement policy administrator at Marine Corps headquarters, wrote in an email shortly after the incident that the order was "inconsistent with the way we're supposed to do business."

Barnes characterized the dispute Friday as a difference of professional opinion.

She said Manning's history of suicidal thoughts before he arrived at Quantico in July 2010, and his generally uncommunicative behavior in the brig, weighed heavily on her decision to keep him tightly confined despite almost weekly psychiatric evaluations that found him at little risk of self-harm and in no need of segregation.

"They would say, from a psychiatric standpoint, there's really nothing. But we all know you don't have to have a mental health issue to want to kill yourself," Barnes said. She then cited the case of Kansas City Chiefs linebacker Jovan Belcher, who fatally shot his girlfriend and himself last week.

She said Manning never directly approached her to explain why he believed he was no longer a suicide risk and why he deserved relief from restrictions including confinement to his cell 23 hours a day.

"He never did it. I would hope every day," she said.

On cross examination, Barnes acknowledged that Manning had told a brig counselor he felt "lucid" at Quantico, unlike his state of mind when he made a noose out of a bedsheet in a cell in Kuwait shortly after his arrest.

And she indicated that even a spoken threat of suicide doesn't necessarily signal intent.

"If somebody really wants to commit suicide, they're not going to tell us that," she said.

The government must prove by a preponderance of evidence that brig officials justifiably believed the strict conditions were needed to keep Manning from hurting or killing himself.

The 24-year-old native of Crescent, Okla., was an intelligence analyst in Iraq. He is charged with 22 offenses, including aiding the enemy, which carries a maximum penalty of life in prison. He is accused of leaking hundreds of thousands of classified Iraq and Afghanistan war logs and more than 250,000 diplomatic cables while working as an intelligence analyst in Baghdad in 2009 and 2010.

He is also charged with leaking a 2007 video clip of a U.S. helicopter crew gunning down 11 men later found to have included a Reuters news photographer and his driver. The Pentagon concluded the troops acted appropriately, having mistaken the camera equipment for weapons.