"Girls": Hannah Horvath no longer cares what you think

"Girls" returns with its star reveling in self-involvement — eliciting more laughs. But something's been lost 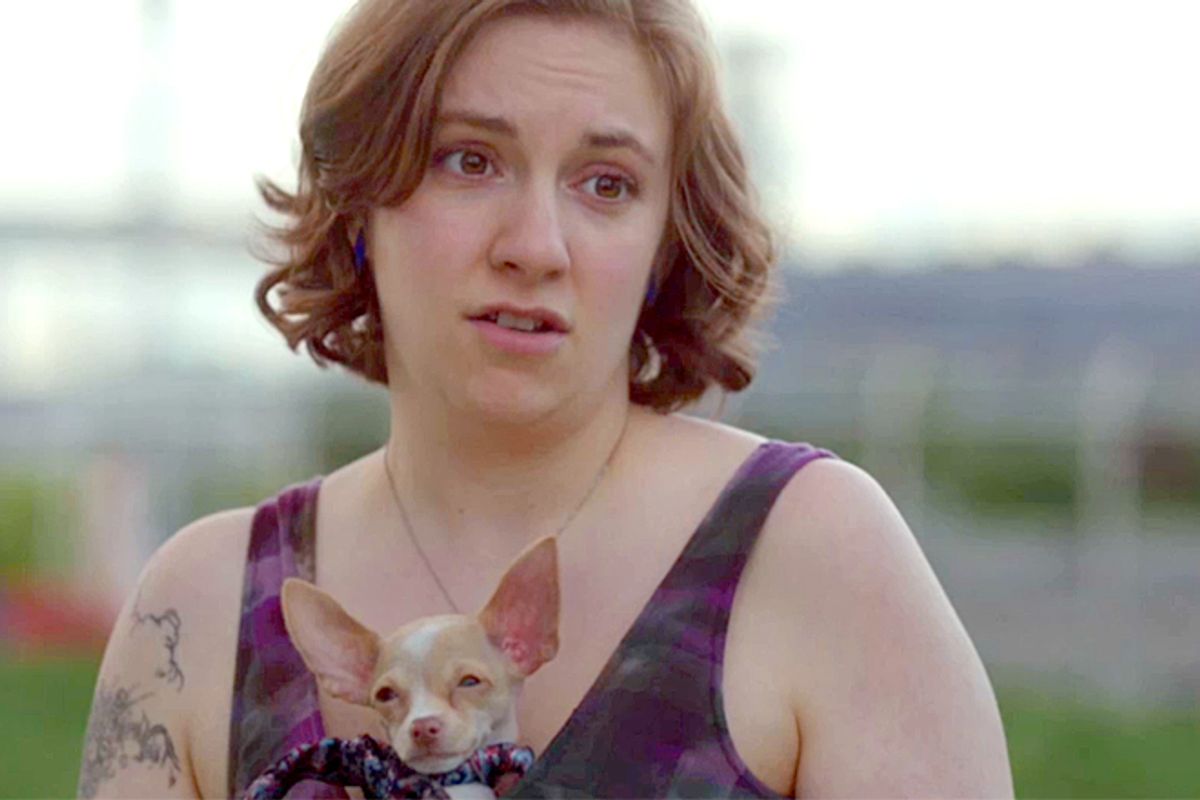 On the new season of HBO’s “Girls,” which begins Sunday night, Hannah Horvath finds herself sweaty, happy and coked up out of her mind dancing in the middle of a packed weeknight club in Williamsburg. She decides the exact thing to do at this moment is swap shirts with the gyrating man shimmying right beside her. Off comes her ill-fitting, cherry-patterned tank top. On comes a chartreuse mesh number through which Hannah’s breasts are clearly visible. (It’s a wide mesh.) For the remainder of the episode — an ecstatic dance-off to Icona Pop’s “I Love It,” a trip to an extremely well-lit Duane Reade, an excursion out to Bushwick, possibly on public transportation — Hannah unself-consciously wears this tank top, because, on the subject of who sees her breasts, Hannah Horvath could not give a shit, and, on the subject of who sees her breasts, Lena Dunham could not give a shit, which is one of the few remaining qualities the two share.

The question of where the character Hannah Horvath ends and the multitalented Lena Dunham begins was one the major tripping points for haters of “Girls'” wonderful, personal, sloppy first season: Was “Girls” a satire of Dunham and her peers — or a celebration? And how could it be both? Was it about entitlement and privilege or just a product of entitlement and privilege? Was Hannah cluelessly living in an accurately if uncomfortably all-white world, or was Lena Dunham the one who was clueless, or worse? How funny was Hannah’s joke about being “the voice of her generation” when Dunham really wasn’t joking about it at all?

The stunning original three episodes of “Girls,” the ones that were the original materials on which the “Girls”-lash (the back, pre, post, front, sideways, upside down, diagonal-lash) was based, were the episodes that most aggressively begged these questions, because they were the most personal, the ones that felt like outtakes from the life of Lena Dunham finessed and futzed with a little for HBO. Those first three episodes had a memoiristic, anthropological vibe — the hothouse feeling of real-life observations and predicaments Dunham had been saving up to share for years — unmatched by future episodes.

As “Girls'” first season progressed it became more concretely based on imagination than experience. With every episode, Lena Dunham was learning more and more about how to make a TV show, and so each week the show became more TV-like, which is not an insult — or not just an insult. “Girls” and its characters became more fictitious, more polished, more recognizably related to a standard sitcom. The show lost some rawness and shag, but it got broader — by the finale, Hannah’s boyfriend was getting hit by a bus, like he’d wandered into a Brooklyn-set remake of “Mean Girls” — funnier, more clear-eyed about its characters and their flaws, more interested in the specificity of the jokes and the personalities than in a theoretical generational condition. What it sacrificed in realism, it made up for in laughter. (I don't know where Shosh's pants went in the riotous Bushwick party episode, and I don't care.)

The new season of “Girls” continues on this trajectory, and nowhere is this more clear than in Hannah Horvath, who has become, intentionally, a little asshole. Gone is the neurotic chick who worried about what got up around the sides of condoms, had crappy sex, and couldn't pay her rent, replaced by an impish, hilarious, sometimes-sweet, sometimes-well-meaning, but hugely self-involved, often misbehaving jerk who kicks out roommates like she's got a trust fund and seems related to Larry David or one of the “Seinfeld” gang. There are plenty of viewers who already thought of Hannah this way — one of the most common complaints about “Girls” when it first started was, “Why would I watch anyone so unlikable?” — but the difference between the first and second seasons is that now “Girls” thinks of her this way, too. The series' answer to the question "Why should I watch anyone so unlikable?” is no longer "because she’s complicated and ambiguous and not totally unlikable"; its answer is “because she’s really funny.”

And she is really funny, but not so sympathetic. This season Hannah has concluded that now is her time to be self-involved — she gives a speech to this effect. She does coke because a Web editor tells her to; can’t handle cooking noodles; chastises Marnie for five minutes about how Marnie, and not Hannah, is “the bad friend" just so Marnie will cop to being "the bad friend"; and tells the African-American Republican she’s dating that “Honestly, maybe you should think about the fact that you could be fetishizing me. Because how many white women have you dated? Maybe you think of us as one big white blobby mass with stupid ideas. So why don’t you lay this thing down, flip it, and reverse it.” (I’ll be writing about this scene more when it actually airs, but one of the ramifications of Hannah’s amped-up assholery is that “Girls” tries to pass the buck on its race issues to Hannah, the insensitive, self-involved dolt. Hannah behaves badly and idiotically, and the show leaves it at that, as though its recognition that the make-believe Hannah is a jerk is enough.)

Hannah is not the only girl who has become a more satirical, acrid version of herself in the off-season. With her life falling apart, Marnie (Allison Williams) has added a rich new flavor of super bitch to her uptight princess routine. Williams’ line readings can be deliciously tart. “Where do you get your headbands?” she asks her ex-boyfriend’s new girlfriend. The newly married, still charismatic Jessa (Jemima Kirke) puts on a show of petulant self-immolation with her new husband’s parents that is a sneering and uproarious marvel to behold. “I hate this restaurant but I don’t care, because I’m so happy to meet you guys,” she says by way of introduction. The only character who has not become a more Manichaean version of herself is Shosh (Zosia Mamet), though she has significantly amped up her “likes” per sentence while exploring variations on the side ponytail and navigating the difficulties of adorable first love.

All of this adds up to a much funnier, but less felt second season. "Girls" has taken a more damning perspective on its characters and their behavior this time around, and the results are much sharper but less moving. I probably laughed more at the first four episodes of the new season than the entirety of last season (Andrew Rannells as Elijah, Hannah’s now-gay ex-boyfriend and new roommate, is particularly great), but I got emotional about it much less. I enjoyed deeply the episodes I saw, but something has been lost in "Girls'" upgrade to high-functioning comedy. This Hannah Horvath feels very far from the girl who stayed up late at night tweeting that “all adventurous women do” before dancing with her best friend to Robyn. "Girls" has matured leaps and bounds, comedically and structurally, but it has jettisoned some of its ambiguity, its sweetness, its own affection for its characters. It's more coherent, but it's also safer. Like you needed anyone, even Lena Dunham, to tell you 23-year-old girls were sometimes something to laugh at.