"30 Rock's" great finale: "These were the best days of my flerm"

After seven seasons, Tina Fey and company go out on a high note (from "The Rural Juror") 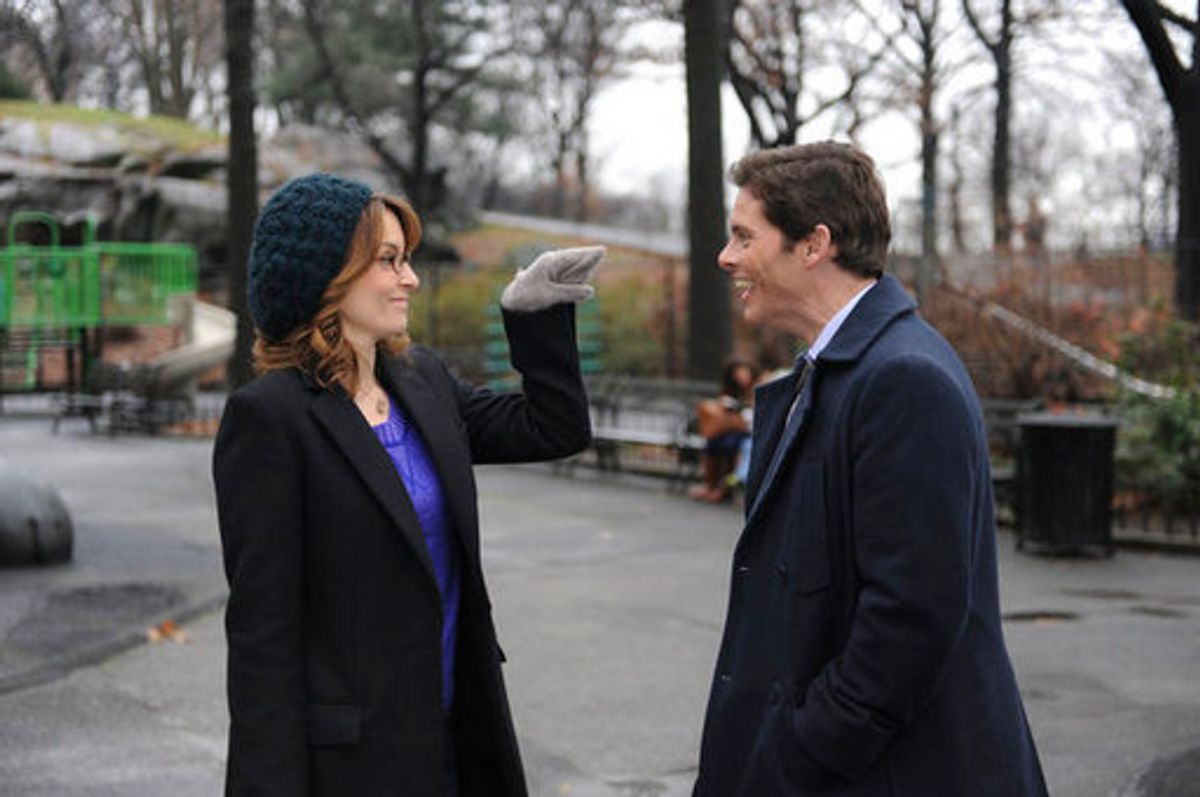 “30 Rock” infamously began the same autumn as another NBC series set behind the scenes of a sketch comedy show: Aaron Sorkin’s much-trumpeted, totally pretentious “Studio 60 on the Sunset Strip.” “Studio 60” blew a lot of hot air about television, about how it was a glorious medium with a storied history that had been degraded by partisanship and celebrity and evangelicals and could really only be rescued by a dedicated band of writers and comedians who knew what good was. It was cancelled after one season.

“30 Rock,” in its own way, agreed that TV was an occasionally glorious and largely degraded medium. But instead of pontificating about it, its dedicated band of writers and comedians spent seven years mocking, skewering, filleting, and satirizing TV and the TV business, cleverly laying open its stupidity and venality in thousands upon thousands of brilliant jokes from  “MILF Island” to NBC’s just recently revealed policy of giving its employees flush buddies to save water. “30 Rock” was honest — or over-the-top surreal and ridiculous, if you prefer — about TV’s dark side, but by its very existence it endlessly refuted, just like Kenneth the Page, that crap was all there could be.

“30 Rock” refused to lecture about how great it was because Tina Fey and her writers knew ambition goes down better with fart jokes, and also that if you make fart jokes complex and layered enough and call them back over and over again you've built a really ambitious fart joke. While taking the piss out of almost everything almost all of the time, “30 Rock” demonstrated what a high-standard a TV show can maintain, just how much patience an admittedly tanking, but otherwise craven network can provide it, and just how much a show of such caliber can demand of its audience. For a series that prided itself on never believing in much of anything, “30 Rock” really did believe in (the admittedly small number of) people watching from home, hopefully not on Kabletown couches.

And to those people“30 Rock” delivered a wonderfully satisfying, sweet series finale. It had everything you could ask for in a last episode: conclusions, tears, swipes at network TV, profane acronyms, the sentence “I love you Jack,” a callback to “The Rural Juror,” and, for a kicker, evidence that all of “30 Rock” was really just a pitch from Liz Lemon’s great-granddaughter to the un-aging studio executive Kenneth. (On "30 Rock," NBC survives into the age of flying cars.)

The conceit of the episode was that “TGS” had to come back for one more episode, rescuing Liz from stay-at-home-mom purgatory so she could, as usual, deal with everyone at “TGS” being nuts. The episode masterfully balanced “30 Rock’s” typical, infinite throwaway lunacy — a storyline about the writers' room last lunch, foiled by Lutz, was surprisingly emotional; Nancy Pelosi calling Jack “an economic war criminal”; Temple Grandin jokes; Liz on a mommy message board, for goodness sake — with arcs that climaxed in big emotional moments.

Jack, who had been unable to find happiness using the ASS method, quit as CEO of GE, had a falling out with Liz — “You’re just an alcoholic with a great voice” said a way harsh, typically meta Liz — and ended up sobbing in Jenna’s dressing room (“Don’t cry, daddy!”) before telling Liz in roundabout German that he loves her — and then having an epiphany about see-through dishwashers (which really would be awesome). Jenna finally realized she’d miss “TGS” when her mirror got taken away, and then played “30 Rock” out by singing mush-mouthed lyrics from “The Rural Juror": "These were the best days of my flerm" never sounded so sweet. Tracy and Liz reconvened in the strip club where they met in the show’s pilot to have some real talk about their friendship and good-byes. It ended with the platonic ideal of a “30 Rock” joke, one that's smart, curmudgeonly, funny and true: “Because the human heart is not properly connected to the human brain, I love you,” Liz told Tracy. Well, mostly true: Through seven seasons, loving “30 Rock” always seemed like evidence that one’s brain and heart were connected perfectly.