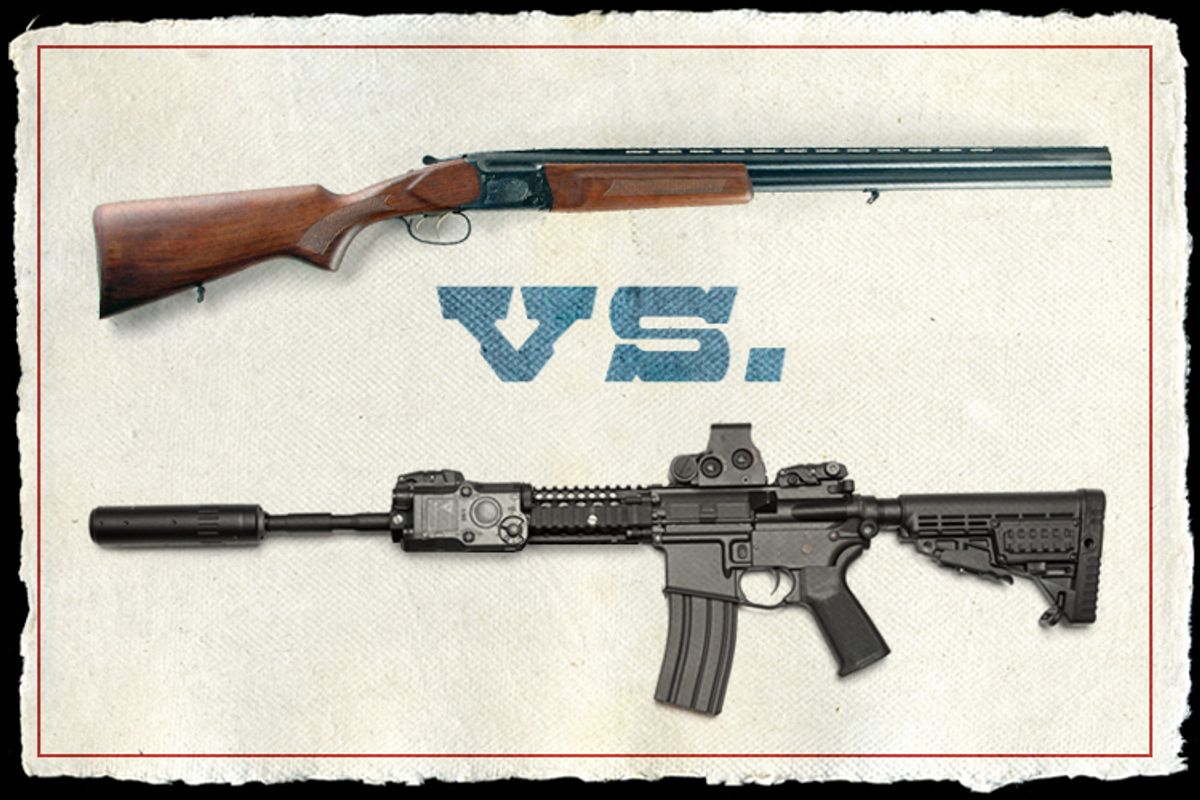 Crazy as it may sound, one of the debates in the fight over gun control in Washington right now is whether you’d be better off using a shotgun or an assault rifle to defend yourself against marauding bandits in some kind of post-apocalyptic hellscape.

But this week, South Carolina Republican Sen. Lindsey Graham, who opposes reinstating the assault weapons ban, said Biden is wrong. Invoking the 1992 Los Angeles riots during a Senate hearing on gun legislation Wednesday, Graham said that while he respects Biden's opinion, “I think I would be better off protecting my business or my family if there was law and order breakdown in my community, people roaming around my neighborhood, to have the AR-15.”

So who’s right? We put out a call to gun experts to find out. It may seem a little gauche to game out the hypotheticals of shooting bandits in a doomsday scenario, but this is something that concerns some in the gun-rights community and liberals need to be able to speak informatively about guns and their use.

After speaking with almost a dozen experts -- police officers, former special forces and CIA officers, firearms instructors and collectors -- we found good arguments to be made for both sides.

The key difference between the two guns is that a shotgun fires a fairly wide group of pellets that spreads out as it gains distance -- a single shotgun shell can fire hundreds of pellets at once -- but holds only up to six shells, while the AR-15 shoots relatively small bullets (about half the size of a .45), but can hold 30 or more per magazine and reload faster.

The case for the shotgun is basically this: Because it shoots a wide grouping of pellets, you're more likely to actually hit the marauding bandit in a tense situation when it’s easy to miss, even without training. This also makes it safer, because it only works at close range (where you have to actually see your target) and pellets are less likely to go through walls and hit the innocent person in the next room.

Here's the case for assault weapon: It has longer range, more capacity and is quicker to reload.

Jim Hruska, a former Army Ranger who commanded three marksmanship units and is now a firearms instructor in Florida, in addition to a gun collector and blogger, said he would take the shotgun almost any day. “For an assault rifle, you have to have some pretty extensive training to be proficient with it,” he said, noting that only perfectly aimed shots will work while the others will whizz by.

Explaining that he keeps an Ithaca police shotgun “no more than 3 feet from my bed,” Hruska said, “One thing that I consistently tell people is that an assault rifle is only useful is if you’re fighting as a unit," when team members use fire and movement tactics to overwhelm an enemy. “That’s obviously not a home defense kind of thing.”

But Bill Garrahan, a police officer who also owns a tactical firearms training facility in Richmond, Va., disagreed. “Joe Biden knows about as much about fighting a gun battle as the average civilian, which is nothing,” he said.

“Shotguns are fine for home self-defense and hunting, but a poor choice in the event of the post-apocalyptic ‘marauding horde.’ Typical magazines contain four to six shells and take valuable time to reload. An AR-15 holds 30 rounds and it takes one to two seconds to change magazines,” he said.

Jason Hanson agreed. He’s a former CIA officer who now runs the Concealed Carry Academy and wrote a book about the lessons he learned about guns during his time in the intelligence agency. “If the world’s ending and I’ve got a horde of zombies (or a certain set of relatives I’m not too fond of) coming after me, I’ll take an AR-15 over a shotgun any day of the week,” he said, pointing to the range and quicker reload time.

Indeed, most of experts we spoke with agreed with that, but they are also all experts. As Hanson said, “The folks who know how to properly use an AR should survive a lot longer than the people with just a shotgun,” but for most people, who don’t know how to use an assault rifle, they may be better off with a shotgun. Besides, most gunfights are over after a tiny number of shots are fired, so reloading is usually not much of an issue.

There’s also a matter of personal taste and some consideration of the circumstance. If we’re talking about a full horde of murderous Mad Max villains bearing down on Joe Biden and Lindsey Graham, then they'd want a rifle. But that never happens, outside of movies, and you'd be better off running anyway than trying to make some kind of macho Rambo stand. If Newt Gingrich is right and an EMP wipes out electronics in Washington, and Joe Biden and Lindsey Graham flee to a cabin in the Maryland woods where they only have to worry about a wandering looter, the shotgun is probably better.

What about zombies? The Zombie Research Society likes both and there’s no clear consensus on various online zombie forums. Max Brooks (son of Mel) doesn’t particularly like either weapon in his comprehensive and well-written Zombie Survival Guide, preferring a World War II-era rifle that conserves ammo and can be used as a weapon itself.

“But the truth is, I would use whatever I could get my hands on," Hruska said. Another thorny gun control debate that seems unresolvable.