The GOP "civil war" is going to make both sides rich 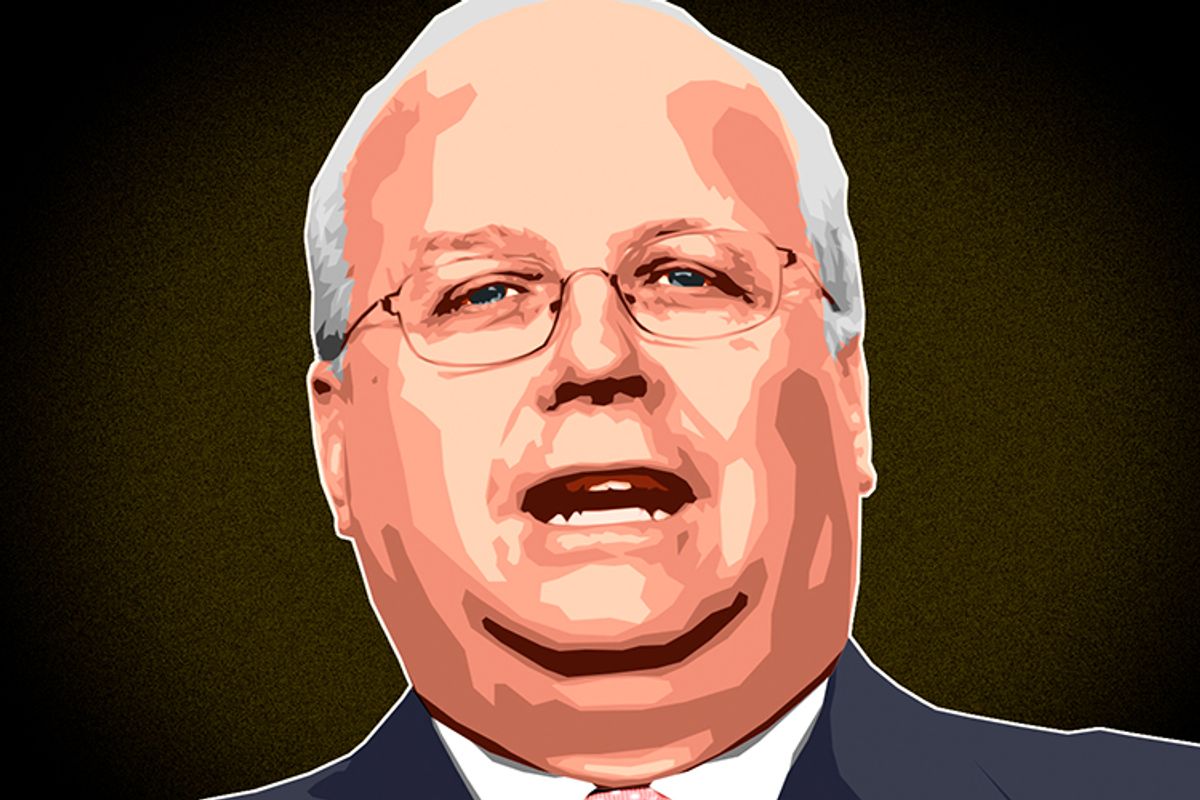 If you haven't been paying attention to rubbernecking reports on the most recent "GOP civil war," because you've been paying attention to more important stories like the DoJ targeted-killing white paper or the disastrous retooling of once-promising NBC sitcom "Up All Night," here's what you've missed: A couple of well-funded conservative groups made a big deal about being mad at a new well-funded conservative group, giving all the groups involved a wonderful new sales pitch for their fundraising efforts.

Most stories are presenting the fight as a war for the soul of the Republican Party, with sellout pragmatist Karl Rove and his "Conservative Victory Project" on one side and the purist conservative groups like the Club for Growth on the other. In a radio interview, a CVP spokesperson referred to venerable conservative huckster Brent Bozell as a "hater," which led to a very overwrought open letter signed by two dozen huge conservative movement players, from Frank Gaffney to Ginni Thomas, demanding the spokesperson's firing.

This isn't actually an ideological battle. It's mainly an argument about strategy. Karl Rove is savvier than most of the people he's warring with. He's in many respects the best friend the conservative movement could have, if they actually listened to him: Rove's "pragmatism" means electing as many Republicans as possible, so that the conservative movement can implement its conservative agenda. Rove knows that moderate Republican elected officials give true conservatives power. Rove's CVP is going to attempt to aid electable Republican Senate candidates in party primaries, to avoid Todd Akin situations. The Club for Growth exists to push already-elected Republicans to the right, by threatening to fund primaries against them. The groups don't necessarily have to be at odds: The Club for Growth's model has effectively kept the Senate in the hands of the Democrats. It's also, in its defense, pushed the party, and Congress, closer to a purer conservatism.

Karl Rove is smarter and more accomplished than most of the people who signed this letter, if we're talking electoral politics. If we're talking list-building and fundraising, though, you can't do much better than these signatories, most of whom belong to think tanks or publications or "activist groups" of very questionable influence. These are people who've spent years perfecting a scheme in which conservative people send them money, for accomplishing next to nothing to advance conservatism.

The conservative movement is a massive and elaborate moneymaking venture. Numerous nonprofits exist almost solely to raise money, which they spend on their own salaries and, obviously, more fundraising. A conservative civil war is great for business. Karl Rove throwing money at "electable" Republicans is a wonderful opportunity for people to raise money for groups that promise to elect crazies. More primary campaigns means more jobs for consultants. More third-party groups fighting for the soul of the party means more desperate pitches to gullible millionaires and billionaires. Plus more crappy books sold in bulk to conservative book clubs!

Rove's super PAC and dark money nonprofit spent more than $300 million losing the last election. He obviously intends to raise even more money over the next two cycles. And the more his ostensible competitors will raise, which is why they all sound suspiciously like cartoon Tex Avery wolves audibly salivating in their quotes for this Politico story:

[FreedomWorks] CEO Matt Kibbe welcomed the prospect of squaring off against the Conservative Victory Project, asserting, “The guys who fund groups like Rove’s want to re-establish that they’re in charge, but they just don’t understand the inevitable decentralization and democratization of politics.”

And Club for Growth President Chris Chocola added that Rove and Law have gotten CFG donors’ attention and “may energize the groups that they view as ‘the problem.’”

Family Research Council President Tony Perkins said his group will focus on a few races — primarily in the Senate. He said it’s just as well that “the moderate Republicans who have been involved in these primaries behind the scenes [are] making it clear that they intend to engage in primaries and defeat conservatives.”

"Donate to us or Karl Rove will defeat true conservatives" is a great pitch. Maybe even better than "donate to us if you actually want Republicans to win elections." While only an idiot would send any money to FreedomWorks, an organization that currently pays Dick Armey a six-figure salary to not work there,  the last cycle showed how many well-heeled idiots are out there asking to be fleeced.

It was hilarious last week watching respectable right-wing commentators like Peggy Noonan and Rich Lowry slobber over the inane Super Bowl ad featuring the disembodied voice of the late Paul Harvey, a right-wing huckster par excellence. Harvey was a broadcasting legend not just for his longevity, but also -- maybe primarily -- because of the apparent sincerity with which he hawked completely useless crap to the Social Security-collecting set. Glenn Beck and Rush Limbaugh, neither of whom have qualms about ripping off their audiences, are his spiritual heirs despite their narrower appeals.

The entire modern conservative movement these days seems like a successful experiment in getting rich people (and lots and lots of non-rich people, whose donations are less coveted but accepted nonetheless) to pay an ever-growing number of pundits, think tank "fellows" and "scholars," failed campaign hacks and people like Ginni Thomas who seem to serve absolutely no purpose whatsoever. Like Paul Harvey, the super PACs and nonprofits know it doesn't matter if your products -- in this case, ideas and candidates and electoral strategies -- are worthless, as long as you push the crap convincingly. Whether Rove succeeds or fails in helping the Republican Party, his campaign will be great for the movement.