Oil drilling could be new nadir for Pinnacles National Park 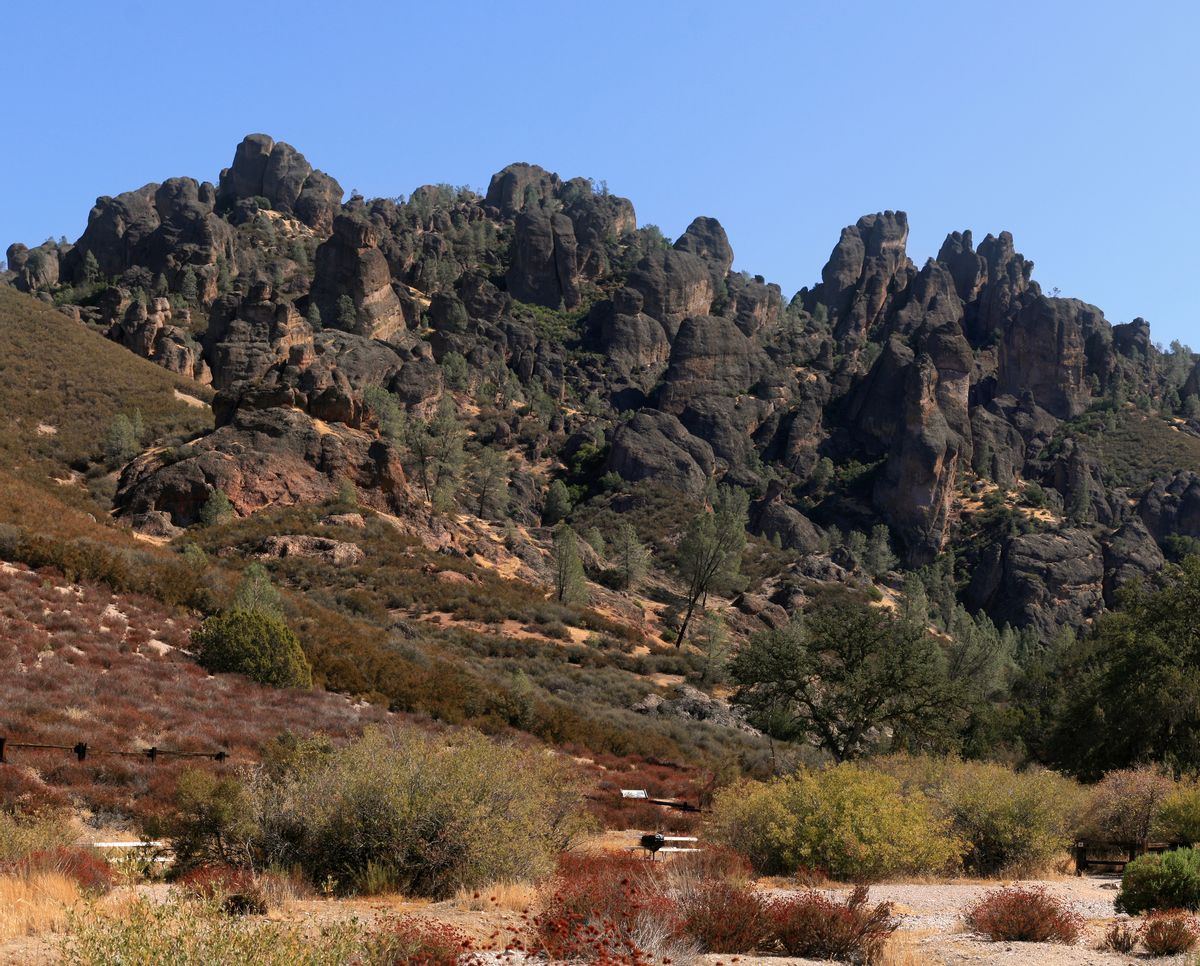 On Monday, February 11, hundreds of people — including Secretary of the Interior Ken Salazar and Congressman Sam Farr — gathered together to celebrate the creation of the United States’ newest national park, Pinnacles. An unusual outcropping of volcanic rock spires rising from the oak savannah of the California Coast Range, Pinnacles is a 27,000-acre wildlands preserve that is home to foxes, badgers, eagles and an estimated 31 California condors, a species once on the edge of extinction that has now rebounded thanks to a decades-long recovery campaign.

“Our parks offer opportunities to enjoy outdoor recreation with family and friends," Secretary Salazar said at the ceremony, reading from a letter from President Obama, "and they provide a safe and accessible setting to appreciate the bounty of our land … Pinnacles National Park is now among these cherished sites."

Cherished, perhaps, but not necessarily free from potential threats.

As the dignitaries were celebrating Pinnacles’ elevation from a national monument to a national park, the staff at the local San Benito County Planning Department were preparing the paperwork for an application for exploratory oil wells just seven miles (as the condor flies) from the southern border of the park.

A California wildcatter oil company, Citadel Exploration, is seeking to drill up to 15 steam injection wells on a cattle ranch south of the park. In the 1970s, Chevron drilling in the area came up with what in the industry is known as “heavy oil” — petroleum deposits with the consistency of Play-Doh. If Citadel’s exploratory wells hit oil that is recoverable and economic to extract, the company will then seek permits for full field development. A company executive says a full field could involve “conservatively, a couple of hundred wells” spread over some 680 acres.

That prospect has some residents of the region and environmental groups worried. They fear that the presence of heavy industry could undermine the recovery of the California condor, a federally protected endangered species. They say the steam injection process will use vast amounts of water in a semi-arid region — as much as 17 million gallons of water for the exploratory wells alone. And they warn of the possibility of groundwater contamination or surface spills that could come with drilling.

Opposition to this one exploratory drilling project is being fueled by larger worries over a possible new oil rush in Central California. The region sits above a geologic formation, the Monterey Shale, that, like the Bakken Shale in North Dakota, contains vast amounts of oil. The deposit is thought to hold more than 400 billion barrels of oil — far more than the Bakken or Texas’s Eagle Ford Shale. About 15 billion barrels of petroleum are recoverable using existing technologies, according to the U.S. Energy Information Agency.

The park is home to an estimated 31 California condors, a species once on the edge of extinction that has now rebounded thanks to a decades-long recovery campaign.

Critics of the drilling near Pinnacles are afraid it could be a glimpse of what’s to come. “Our water quality, our air quality, our roads, our way of life — we don’t want to become an industrial zone,” says Maureen Cain, a member of a citizen’s group called Aromas Cares for Our Environment. “A lot of it just doesn’t make sense for this area. But don’t say that to the oil guys.”

Aromas is a sleepy farming town about 80 miles north of Pinnacles National Park. Cain and some her neighbors formed Aromas Cares for Our Environment last summer after a company called Freedom Resources began conducting seismic testing in the area for oil and gas deposits. The group has since been working with officials in San Benito County to rewrite the county’s oil drilling ordinances, which haven’t been updated in about 40 years.

“I don’t want to say there’s fear, but there is concern over what could be coming,” says Byron Turner, assistant planning director for the county.

The San Benito Planning Commission was supposed to decide on Citadel’s drilling permit at its February 20 meeting, but significant public opposition to the proposal and a slew of last-minute comments forced the commission to schedule another hearing on the matter for March 20.

“We were able to get 20 people out [to the meeting], which is pretty good in a backward place like San Benito County,” says Patricia Lerman, another member of Aromas Cares for Our Environment. “We are not anti-oil. We all drive cars. I am talking to you from my Prius. But we believe strongly that we need to have safe and responsible drilling where it needs to happen. We don’t think that the application has safe and responsible regulation.”

A 20-page memo submitted to the county by the Center for Biological Diversity lists a range of concerns about the proposed drilling. According to CBD, “the potential for the Project to result in significant impacts to the California condor is obvious ... Infrastructure such as production facilities, roads and pipelines will eliminate habitat and food sources, discourage habitat use, and break up habitat connectivity.” CBD also warns about the proposed drilling method. With cyclic steam injection (known as “huff and puff” among petroleum engineers), vast amounts of high-pressure steam are forced underground to thin out heavy oil deposits and improve their viscosity. The process is commonly used in the Athabasca tar sands in Alberta, and has an especially high carbon footprint because of the need to heat the water to create steam. CBD’s memo warns that “steam injection is a particularly risky method of oil extraction … Cyclic steaming could cause this large amount of waste water, as well as oil and other fluids, to contaminate aquifers or surface water.”

Phil McPherson, CFO of Citadel Exploration, says the concerns are being blown out of proportion. “You can do things safely, you can do things efficiently, with a minimum amount of impact to the environment,” he says. “In November we hosted a three-hour town hall meeting in Hollister. We sent out letters to all of the area landowners. They can ask us any question they want. We have nothing to hide here. We aren’t doing fracking. We aren’t doing anything new here.”

McPherson says the exploratory drilling will use existing roads already used by the cattle ranch. Cyclic steam injection, he says, is a proven oil extraction method that accounts for about 60 percent of California oil production. Waste water from the steam injection process won’t be left on the surface, but will go into tanks, where it will be cleaned and then reused for other injections, so at to reduce water usage. And, he says, his company is investigating using solar panels for steam generation, which will cut down on the amount of energy needed for extraction. “We are trying some innovative and avant-garde things to make this run smoother,” McPherson says.

No matter what San Benito County officials decide at their March 20 meeting, it’s likely that battles like this will become more common in California as oil and gas companies start to employ new methods to tap into the Monterey Shale.

A new oil rush is already evident at the massive San Ardo oil field, located just south of King City. Two days after Secretary Salazar celebrated the creation of Pinnacles National Park, I happened to be driving north on Highway 101 and passed the oil field, which is easily visible from the road. San Ardo, which is mostly owned by Chevron, hit its peak production in 1967; in recent years many of the pump jacks there have been still. But a few years ago some companies began experimenting with horizontal drilling techniques, and the new wells are beginning to show results.  I pulled off the highway to take some pictures of the new drilling rigs dotting the basin. In the five minutes I was there, three massive trucks hauling equipment pulled into the field — one small example of the fresh activity in California’s oil patch.