Rebecca Hall: "I thought it was brilliant to play a scene holding a douche'"

The star of HBO's "Parade's End," based on Ford Madox Ford's novels, discusses the virtues of an unvirtuous woman 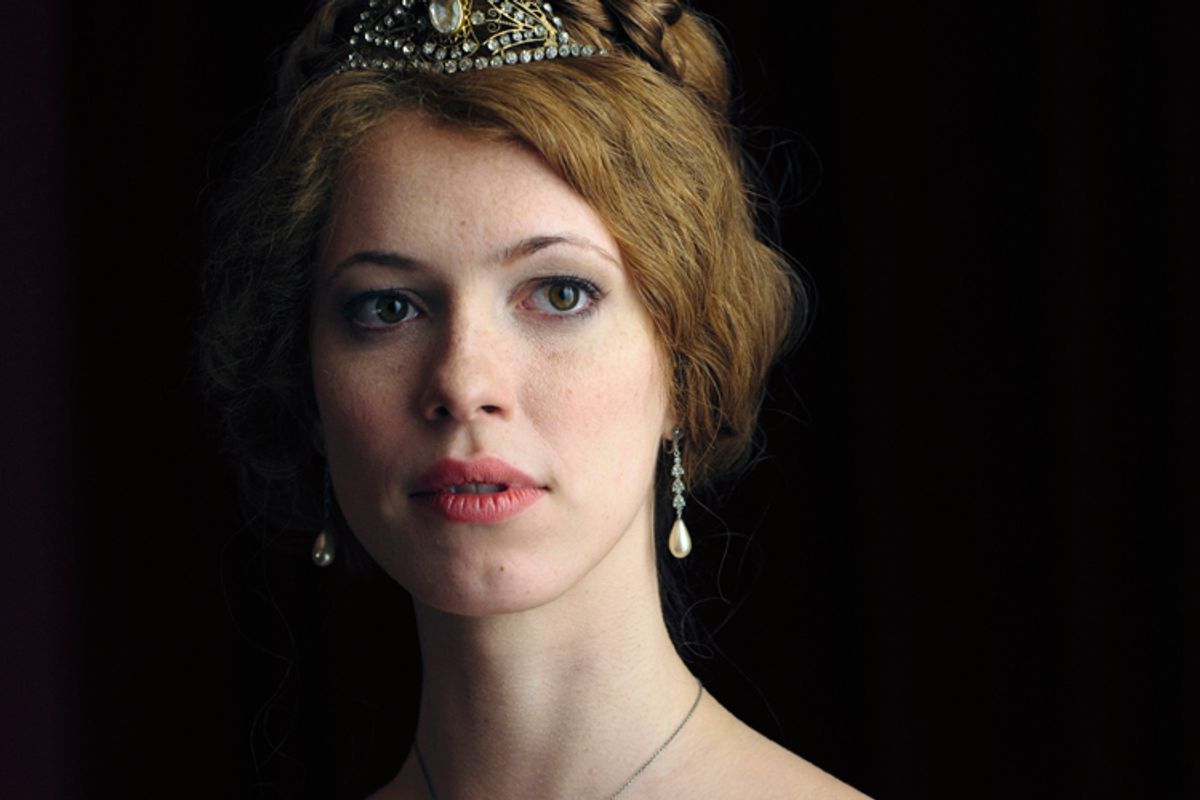 "Parade's End," HBO's five-part costume drama makes "Downton Abbey" feel like a Cliffs Notes take on WWI-era England. Based on Ford Madox Ford four-novel series and adapted by Tom Stoppard, the dense, opaque, high-minded mini-series follows Christopher Tietjens (everyone's favorite Sherlock, Benedict Cumberbatch), a good man living by an increasingly outdated code of chivalry, as he navigates uppercrust society, the war, and, especially, his toxic, bitchy wife Sylvia, played by Rebecca Hall. Despite all her period-perfect costumes, Sylvia is a thoroughly modern creation, an ancestor to all the "unlikable" women so en vogue on television right now, psychologically deep and disturbed, a scene-stealing, scenery-chewing monster who tests, but occasionally inspires, the audience's sympathy. (Compared to Sylvia, "Downton's" imperious Lady Mary is a total teddy bear.) Hall's performance is one of the reasons to watch and rewatch "Parade's End," despite the difficulty of the material: As Hall points out in the following interview, "Parade's End" is not the sort of television you can watch half-paying attention. Hall, an accomplished Shakespearean actress, co-starred in Woody Allen's "Vicky Cristina Barcelona" and Ben Affleck's "The Town." She'll soon be appearing in "Iron Man 3." She spoke with me about the mini-series, her love of Bette Davis, the importance of unlikable female characters, and douchebags (the object — not the personality type).

Sylvia is kind of a horror show. Did you like her right away or did you have to figure out how to be sympathetic toward her?

Well, I don’t think you have to feel sympathetic toward a character straight off the bat in order to want to play her. I read maybe her first three lines and realized that I wanted to play her because I knew she was going to be a force. She has such extraordinary things to say that, frankly, if I could come even close to being as bold and saying these things in life, I’d think I was probably quite cool. I mean, she is a nightmare, but she is the kind that you love, and that was very clear to me from the get-go.  So sympathizing with her wasn’t really an issue. To read a character I’m not sympathizing with is generally quite a good, attractive proposition because I’ve got somewhere to go, I’ve got work to do, to try to understand why they behave like they behave, to relate entirely and understand them and to be completely emotionally connected. That is much more fun 99 percent of the time.

It seems like it would have been pretty easy for this performance to become campy, sort of “Mommie Dearest”-ish. Did you think about that?

Yes, I did. I was the kid that grew up watching Bette Davis films. When I was 10 years old I went through a patch, maybe three months, where my mom couldn’t get me to bed unless I watched all of “All About Eve” every night. And I sat there and I tried to recite all of Margo Channing’s lines. So I understand camp. I always dreamed of getting one of those roles that could be slightly put into that bracket, because they are tremendous fun.  But I don’t think camp for camp’s sake is interesting. The great performances which have gone into that bracket are generally very true. And that’s why camp is so difficult. If something goes too far in an over-the-top direction, it’s not camp, it’s just bad. It’s not interesting. It’s a really delicate balance. But I was completely aware that Sylvia could be really campy and really OTP. But for me, that was the first reading reaction and then I had to put that in the box, and then let the real work begin of making her human and comprehensible and credible to the audience.

Were you just saying “OTP” as an acronym for "over the top"?

Oh, I thought maybe it was Internet shorthand I hadn’t heard.

Oh no. That is something I’m not familiar with.

I thought that Stoppard’s script could sit on a bookshelf. It was so brilliant and eloquent and beautifully written. But what I loved about it was the fact that it was sort of like a rare orchid: It didn’t give itself up very easily. You didn’t start reading it and go, “Oh, I know what this is.” You’re reading it and going, “What the hell is this? I don’t know where I am. I think I’m in this sort of heritage period British drama, but I’m not. Because I don’t really know what’s going on. Everything is so opaque and nobody is really saying what they’re feeling, but it’s not like how I’m used to seeing that with the stiff British upper lip clichés. It’s different. And I don’t understand it.” And I loved that about it. It was such a curious piece and I loved how mysterious it was. And I thought this is what’s going to make it interesting to watch, because you have to really delve into it to try and get a handle on it, and then it still slips out of your grasp. And that’s why it stands up to a couple of viewings. The writing is fascinating because it’s elusive.

I do, I really like it. I’ve got this slightly half-baked theory that probably doesn’t stand up at all, but stands up to me and my experience. I recently have become quite obsessed with a lot of Scandinavian drama, the Danish version of “The Killing” and another one called “Borgen,” about the prime minister. And I think part of the reason why I am so obsessed with them and so tuned in to them is because of the subtitles. I have to concentrate. I can’t possibly be on the Internet or texting at the same time. It transports you into a realm of complete immersion, and that’s quite rare in our culture. Back in the day, we used to sit around and spend a whole day reading a novel, and losing hours and hours and hours to that. And that’s the hardest thing in our culture these days, to afford that time. I think that’s part of the reason why people get so obsessed with the idea of box-setting [binge-watching, in American English] because you can immerse yourself into a different world for a long amount of time. And I think it’s quite welcome in the age of Twitter and sound bites and all the rest of it.

Have you avoided doing costume dramas? You haven’t done many and it seems like you probably get offered them quite often.

[Laughs.] Why, because I’m British?

It’s true, you have a point. I’m half-American so I suppose I’m not just drawn to things that smack of British culture. I’m not consciously avoiding doing a lot of period drama, but I don’t really seek it out either.

Sylvia seems like an ancestor of the huge spate of difficult women in TV and films right now.

There are a lot of American sitcoms — like “Girls” or “The Mindy Project" — and films — like “Bad Teacher” and “Young Adult" — that are focused on the stories of very imperfect women.

I think it’s really important, actually. I think for a long time it seemed like working in an art form and being a feminist meant portraying women in a perfect, angelic light. And there’s nothing feminist about that. To give you an example, can you imagine a scene in a movie where there’s a bunch of guys sitting around and playing computer games? And then a woman walks in looking a bit tired and weary and waves her finger at them and says, “Don’t do that, stop playing computer games.” And in a way, everyone goes, “Oh, she’s behaving likes a strong woman.” But she’s not. She’s behaving like a straightforward, boring nag and it’s nothing to do with being a rounded human and it’s completely unfair and anti-feminist and only ever portrays women in a one-dimensional way. So I think it’s brilliant that suddenly there’s this rash of things like “Girls” and all the things you’ve just mentioned, who are daring to say, “I’m a feminist and I’m actually showing women as real human beings.”

Do you have a favorite line from the mini-series? You have a lot of good ones.

There’s a line in Episode 5, I think it was, where she says, “My husband wouldn't throw me over for that scrub-faced ladies champion of the regular bowel movement.” I think that’s my favorite.

I liked that in the last episode, Sylvia has just had sex, and while she's talking to the man afterward is just very casually holding a douche in her hand.

Yes! I know. Disgusting! I was so horrified by that! I thought it was brilliant to play a scene holding a douche, but there was also something really nasty about it, and it was meant to be.

It’s a reminder that with all of these period pieces, like Joe Wright’s version of “Pride and Prejudice,” you can go back and make everything grittier.

Every culture likes to look at periods in its history through the lens of nostalgia. I don’t think it’s making it more gritty than it was, it’s just presenting a version of it that’s not just everyone being all pretty and sitting around drinking tea in corsets. They did actually have sex you know— and badly, as well.