5 reasons American workers could care less about the Dow record

Despite Tuesday's record high, wages are stagnant and incomes continue to shrink 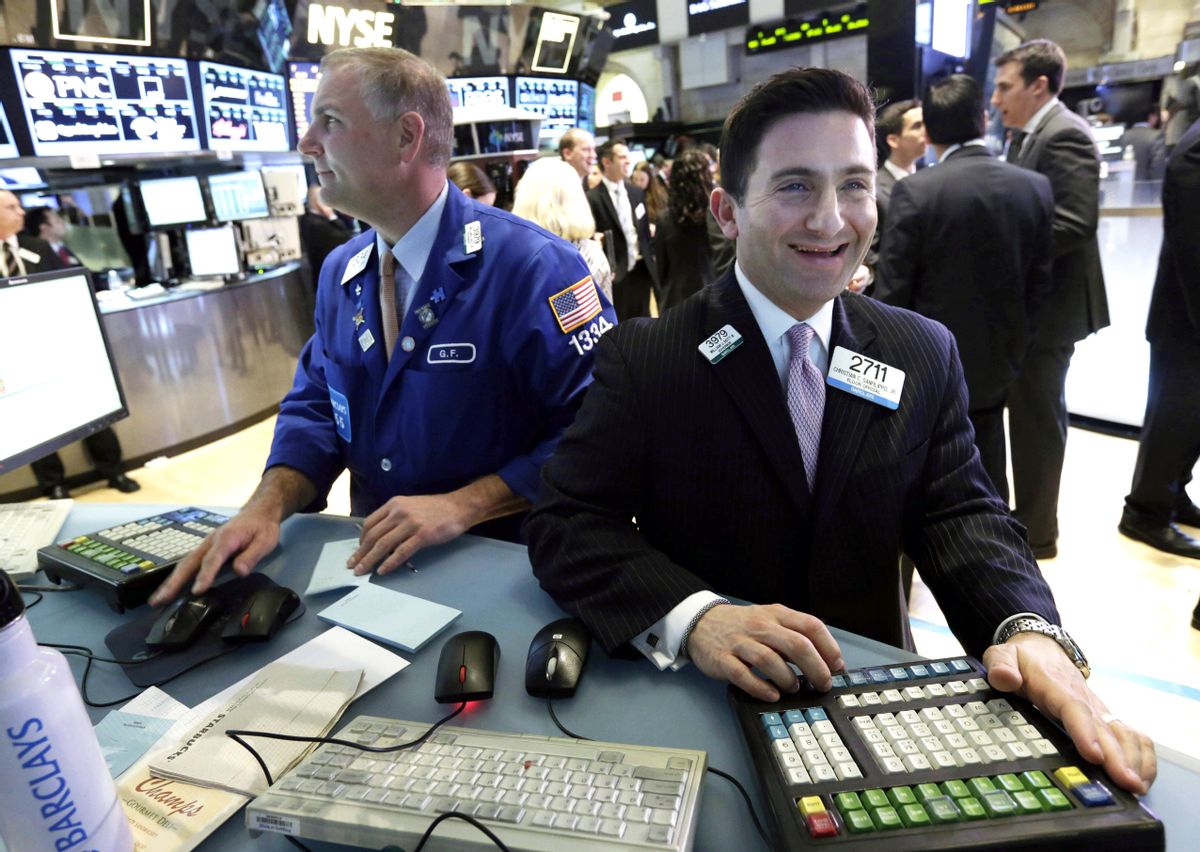 WASHINGTON (AP) — The Dow roared to a record Tuesday. Yet the market's run-up feels worlds away from the lives of many Americans.

Wages have only recently started to recover after months of declines that stretched family budgets thin. Unemployment is stuck near 8 percent, high enough that most Americans still know people who are out of work. Signs of a housing recovery have boosted stocks, yet millions of people face foreclosure.

Fewer people have money invested in the stock market, so many missed out on the rally.

Americans sold more stocks than they bought for a fifth straight year in 2012, despite unprecedented efforts by the Federal Reserve to juice the market and encourage investment. Americans have sold hundreds of billions of dollars' worth of stock — the first time on record that's happened during a sustained bull market. The market rise has been powered by companies buying their own stock.

Confidence in the market was already weak after the harrowing financial crisis that peaked in 2008.

Americans who didn't buy stocks early simply haven't benefited from the rise that pushed the Dow up 118 percent since its recession low in March 2009.

There have been recent signs that investors are shifting their cash back into stocks. People who are buying now are banking on stocks continue to go higher. For them, the surge increased the cost of entering the market.

Wages are stagnant and incomes are shrinking.

The weak job market is limiting pay. With so many applicants to choose among, employers need not compete for workers by boosting salaries.

Hourly wages increased 2.1 percent last year, barely enough to keep up with inflation. Median household incomes fell 4.8 percent between June 2009 and June 2012, after adjusting for inflation, according to a report by Sentier Research, which crunches census and other government data.

Meanwhile, Americans are paying down debt. That leaves fewer dollars available for spending.

The Social Security tax break is no more.

Nearly 80 percent of working Americans are taking home less pay this year because of a tax hike that took effect on Jan. 1. The last-minute tax deal between Congress and President Barack Obama to extend some lower tax rates failed to renew a reduction in Social Security payroll taxes. As a result, the rate increased this year to 6.2 percent from 4.2 percent.

Housing may have hit bottom, but it hasn't fully recovered.

In a healthy housing market, builders start work on about 1.5 million houses and apartments a year. Last year, they began 780,000. That's a 41 percent increase from 2009, but not enough to revive big industries like construction that rely on the production of new homes.

For many Americans, their home is their most valuable asset. When it loses value, they feel less wealthy and are less likely to spend and contribute to the recovery.

The problem is more acute for the millions who owe more on their mortgage than their home is worth. Millions more still face foreclosure because they can't afford the payments on a loan they took out during the credit bubble.

Elevated foreclosure activity causes negative ripples throughout the economy. Foreclosed properties make neighborhoods less attractive to buyers and delay the recovery of home prices. People who experience foreclosure generally can't qualify for loans, limiting their ability to spend as the economy picks up.

The unemployment rate stands at 7.9 percent, an improvement from the 10 percent peak during the recession, but still well above the 5 percent that policymakers strive for during good times.

Unemployment affects the broader economy and consumers' outlooks in a number of ways. Jobless people contribute less to consumer spending, which accounts for about 70 percent of economic activity. Acrimony over extending long-term benefits for unemployed people has contributed to Washington's rolling series of budget standoffs, rattling the economy. And for every unemployed American, there are many more who feel less secure financially because their own job situation is more tenuous.