We let Charles Krafft fool us

Revelations about the artist's Nazi leanings were shocking. More shocking still was how long it took to out him 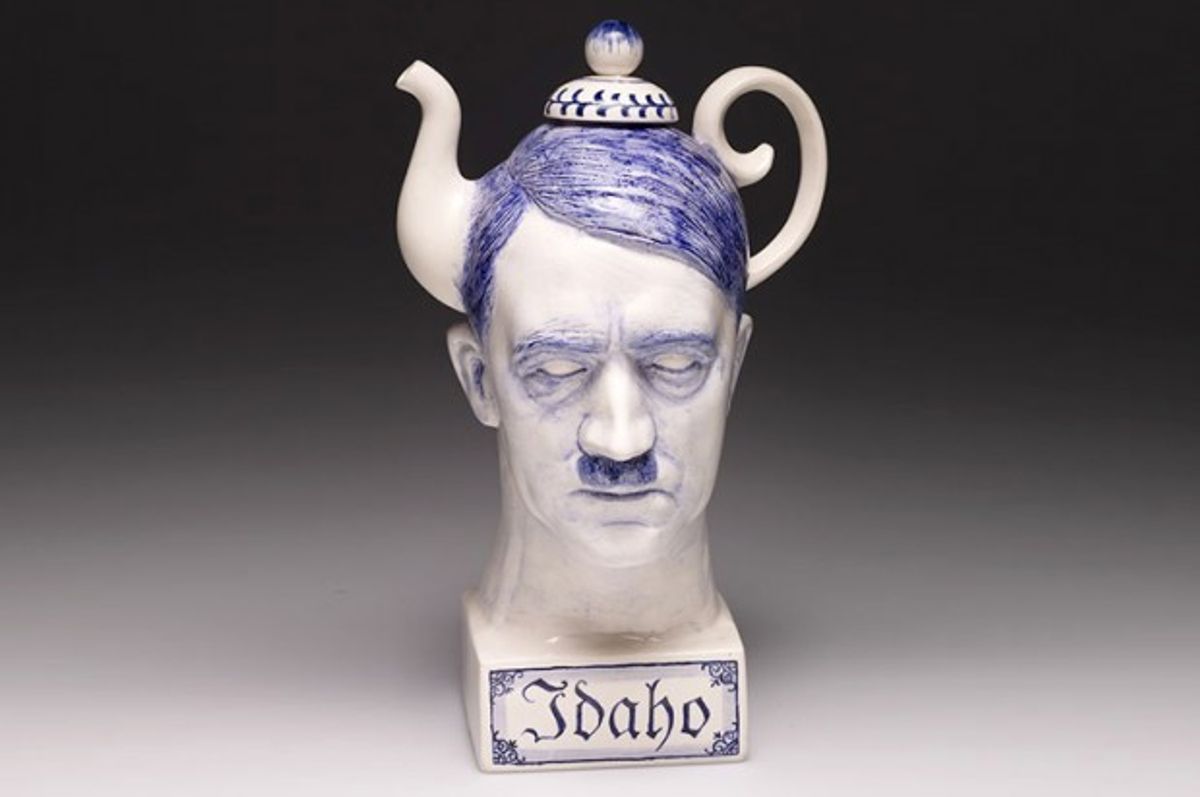 This article originally appeared on The Weeklings. It has been corrected since it first published.

CHARLES WING KRAFFT, the self-taught painter turned postmodern ceramicist, is famous for his ‘Disasterware’ collection, a term he coined for the melding of violent, often Fascist imagery with tawdry vessels. He’s fashioned everything from ceramic grenades with bio-weapons decaled in antiquated blue to perfume bottles appliquéd with swastikas. Krafft’s work has been featured in prominent news outlets such as Harper's and The New Yorker and is on permanent display at the Seattle Art Museum. He’s received endowments from the Soros Foundation and the NEA. Enthusiasts celebrate, or at least used to celebrate, what they believed to be Krafft’s insidious sense of irony that took a darkly comedic take on twentieth-century disasters, not to mention a vicious stand against political iconography in all forms. In 2009, art critic Jen Graves of The Stranger featured Krafft’s ceramic AK 47 on the magazine’s cover, admittedly duping herself concerning the artist’s perceived identity as an ‘iconoclast.’

It wasn’t until recently, however, that Krafft’s ugly allegiances bubbled to the surface, mostly discovered via Facebook rants, podcasts, and interviews with some of his close friends. Priscilla Frank at the Huffington Post linked to a particularly condemning podcast on The White Network, a site that officially hosts “Whites Talking To Whites About White Interests.” On July 28, 2012, Krafft admitted on air, “I believe the Holocaust is a myth.” He then proceeded to list more of his beliefs about the downtrodden state of white identity and the Jewish threat. You can listen to it here, if you’d like, though be warned, it’s not for the faint of heart.

Then came an article by art critic Jen Graves in The Stranger, “Charles Krafft Is a White Nationalist Who Believes the Holocaust Is a Deliberately Exaggerated Myth.” Graves points out that many of Krafft’s closest friends have denounced him in recent months for being a bigot. For example, Fred Owens posted a comment on the artist’s Facebook page in January outing him as an anti-Semite with conspiratorial views ranging from Protocols theories to something you’d find on Stormfront. Krafft responded to Owen’s accusations of bigotry with comments such as “Why amongst the monuments glorifying the history of this nation in Wash DC is there a museum of horrors dedicated to people who never lived, fought, or died here?” He also goes on to post links to Holocaust Denier Paul Eisen and youtube videos dealing with Jewish conspiracies during the Opium Wars. He doesn’t have much more to hide, it seems, for there’s a lot more where that came from.

After Graves’ story dropped this bombshell on the art world, the question lingered: How could we (his fans) not have known? Jillian Steinhauer on the website Hyperallergic covered multiple reactions to Krafft’s outing as a bigot, from white nationalists avowing that Krafft had become the victim of a Jewish media smear campaign, to others angry over the hipster-centric lust for irony that led to the West Coast arts community shunning what should have been the obvious. Steinhauer takes the following quote from Seattle blogger Clark Humphrey on the subject of consumer awareness: “Like many participants in and observers of the Seattle visual-art scene, I’ve long known about Krafft’s open admiration for neo-Nazis and Holocaust revisionist pseudo-scholars. He didn’t keep his views secret. They just hadn’t been written about in the local arts media, prior to Graves’ article.”

Clark wasn’t the only one to speak up on the subject. The aforementioned Fred Owens maintains that the artist had admittedly practiced a quiet, Anglican-style anti-Semitism for many years, writing the following to Graves in an email: We should “not just blame Charlie for this but the entire arts community of Seattle which has proven to be soft-headed. As I said when I wrote about this, it would never happen in Brooklyn or Boston—people would just kick his ass down the block. But Seattle has a misguided kind of false tolerance going on here, so there is a lesson for all of us in this.”

Owens' email, in all its terse wisdom, doesn’t necessarily need to be confined to the Seattle art scene. If Krafft was an avowed neo-Nazi for years, why is it that no one bothered to report on what may have very well been an obvious link between his personal views and his iconography? An even more compellingly question: why is it that in the art world (which includes everything from literature to film) we are so bent on maintaining separation between creation and creator?

In Women, Charles Bukowski refers to the ethereal element of creative expression as the ‘godhead,’ implying a purity of consciousness that exists above the level of the creator himself in a time when he or she is taken by inspiration. A similar sentiment is echoed in MFA programs throughout the nation, postulating that even if artists are violent, sexist, predatory, racist, homophobic, or anti-Semitic, that their work rises above the mortal realm, and generally shouldn’t be talked about in the context of personal fault. Sometimes, the discourse takes on the dimensions of Don’t Ask, Don’t Tell, as if we don’t have a right to breach the sacred barrier between mind and meld. Of course, if an artist, such as Krafft, is openly exposed as a bigot, his reputation will be devalued in the mainstream, but that was because Jen Graves was brave enough, or outraged enough, to expose it. Many may have been content averting their noses from the stink emanating from the gallery walls.

There is both reason and argument to art standing on its own. A successful sculpture, novel, painting, or film is less effective when you know the daily habits of the man behind the curtain. But it does make one wonder what secrets are harbored by what we consider our most brilliant minds.

This weekend Oz the Great and Powerful hits the screens, providing another reimagining of the original Wizard of Oz in the vein of Gregory McGuire’s Wicked. Yet little is remembered of the creator of the saga himself, L. Frank Baum, the son of a devout Methodist family and a fierce advocate for the genocide of Native Americans. Only days after the infamous massacre at Wounded Knee Creek in 1890, in fact, Baum penned an article for the newspaper he owned titled, “Why not Annihilation?” Here’s a quote from the article: “Wipe these untamed and untamable creatures off the face of the Earth. In this lies future safety for our settlers and the soldiers who are under incompetent commands.” Apart from his genocidal views towards Native Americans, Baum also ascribed to a belief system known as Theosophy later in life, which was Aryan-centric and voiced a strong aversion to Jewish identity. And yet, from our constant reimaginings and evolutions as a society, Oz has been taken out of the bigot’s hands entirely, becoming a poster child for diversity, acceptance, and even elements of anti-imperialism. The acting roster is populated by Jews and blacks, and preaches, if ineffectively, a message of cross-cultural understanding.

In this day and age, there aren’t as many excuses for being ignorant. There never really were to begin with, but in some ways, even if it’s simple to be racist, sexist, or homophobic in a quiet, wink-wink fashion in the 21st century, it’s only when someone is put on a microphone that he or she is condemned. Whose hateful whispers, then, are we still ignoring? Whose hate is still flying beneath the radar of popular consumption? Maybe we need to stop turning our heads. Maybe we need to listen closer. If Charles Krafft, a veritable chair nominee for KKK Grand Wizard, is capable of fooling thousands into thinking him a forward-thinking genius, who else are we currently paying, or worshiping, to fill us with surreptitious hatred?