Top 5 investigative videos of the week: Inside the Vatican's secret bank

From "Vatican Inc." to the Oscar-nominated "The Invisible War," a look at the best YouTube has to offer 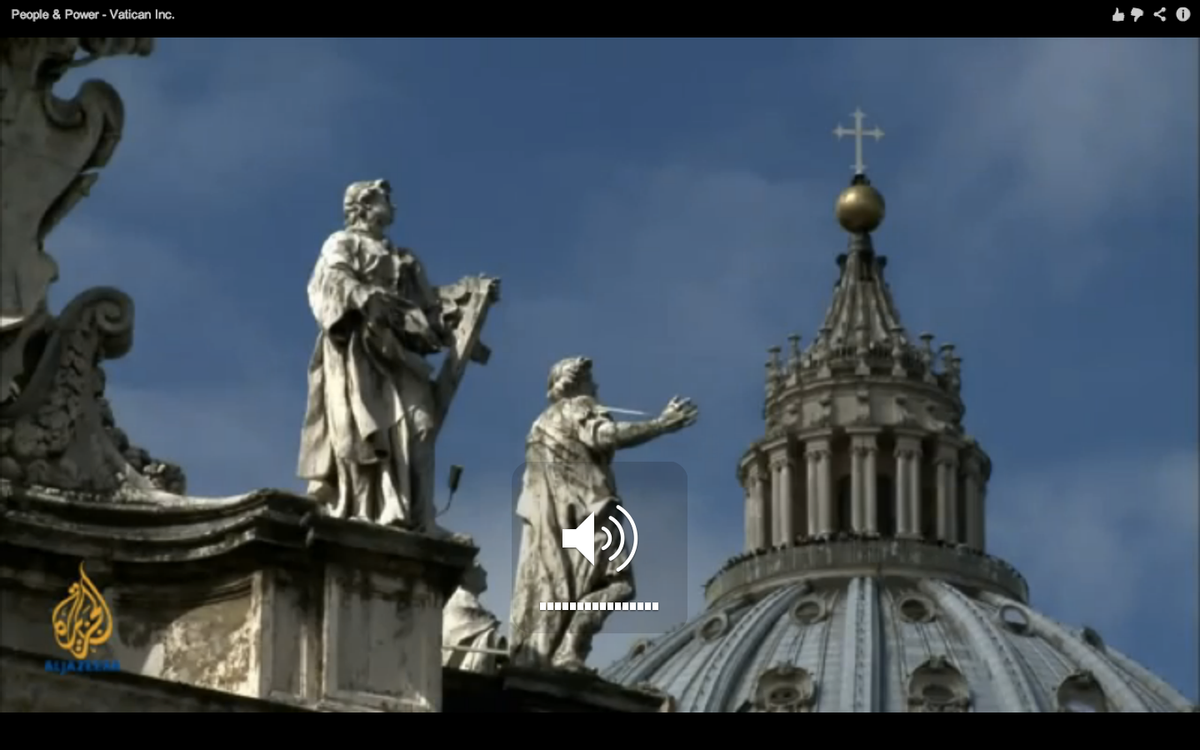 The videos were compiled by the editors of The I Files, the new investigative channel on YouTube. But this is just our take. We’d like to hear from you about any stories that you think we’ve overlooked.

For news on the latest breaking investigations, you can subscribe to The I Files channel. You’ll get up-to-date notices on the best stories from a range of established and independent news sources. No spam or cat videos. We promise.

The director of national intelligence announced earlier this week that cyber crime is now the top threat to U.S. security – beating out terrorism and nuclear proliferation. But what happens when the U.S. government is the one doing the cyber dirty-work? That’s just what troubles William Binney, a former member of the National Security Agency, in this excerpt from Laura Poitras’s documentary, “The Program.” A soft-spoken and unassuming mathematician, Binney left the NSA and became a whistle-blower after he discovered that a top-secret program he had created to monitor foreign threats was being used to spy on Americans. Binney details how the agency is secretly conducting the wholesale collection of the personal information and communications of “everybody in this country” without warrants or oversight. The NSA is currently building the country’s largest data storage facility in Utah, which Binney estimates will eventually be able to hold more than 100 years’ worth of the world’s electronic communication. The full documentary will be released later this year, but you can get a taste of the paranoia now.

One of the first tasks facing newly elected Pope Francis is the reform of the Vatican’s byzantine and highly secretive banking system. The Institute for Works of Religion, as the Vatican bank is officially (and ominously) called, held an estimated $8.2 billion in assets as of 2011, the most recent date on record. The scandal-ridden bank has been plagued by a host of problems that sound like something out of a Dan Brown novel, including fraud investigations, allegations of money laundering, ties to the Mafia and even the mysterious death of its former chairman, who was found hanging from a London bridge.

Al-Jazeera’s “Vatican Inc.” looks inside what has been referred to as “the most secret bank in the world.” This update of the 2011 documentary examines an institution that largely operates without the regulations and restrictions that govern banking in the rest of the world. Along the way we meet intriguing characters like the mysterious “Father ATM,” treasurer of the congregation of the Missionaries of the Precious Blood. I did mention that this is nonfiction, right?

Earlier this week, the Senate held its first hearings in nearly a decade to examine the problem of sexual assault in the U.S. armed forces. Female and male survivors testified about the epidemic of rape in the military and their experiences with a biased system that all but ensures that the perpetrators go unpunished.

This clip from the Oscar-nominated documentary “The Invisible War” tells the story of Hannah Sewell, a young Navy recruit who was brutally raped and then subsequently forced to fight to bring her assailant to justice. Her story is all too typical as only a tiny fraction of the military’s sexual assault cases ever result in a conviction. Watching Sewell’s father, a career military man, as he struggles to come to terms with the betrayal of an institution he had devoted his life to is heartbreaking and infuriating. (He ultimately resigned his commission so he could appear in the documentary and speak freely about what happened to his daughter.) It’s easy to understand why, after seeing the film last year, former Defense Secretary Leon Panetta was moved to announce the need for sweeping changes on how the military handles cases of sexual assault.

“Life with Syria’s Rebels – The Lions of Tawhid,” The New York Times

This Friday marked the second anniversary of the Syrian uprising, the longest and most intractable civil war of the Arab Spring. This New York Times story from last summer follows a small group of anti-government fighters – one of hundreds of such units scattered across the country – as it takes the offensive against government troops. The self-proclaimed “Lions of Tawhid” are made up of army defectors, civilians and even a former real estate broker. C.J. Chivers’ spare and deadpan narration details a few days in the life of this ragtag brigade as members bunk down in the luxurious house of a former Syrian army commander. The unit’s activities vacillate between swimming in the former commander’s pool and – unknown to Chivers and his crew – plotting to turn a government sympathizer into an unwitting suicide bomber. It’s a small narrative of the war writ large.

For a more recent perspective, this footage from an Abkhazian news crew (and it’s unclear just who the crew is) offers a unique vantage point on the conflict – a view from the turret of a government tank as it patrols the seemingly uninhabited streets of the formerly bustling city of Darraya, a suburb of Damascus. This video was the first I’ve come across that allows you to really take in the physical devastation of a frontline Syrian city as the tank rolls slowly and inexorably through the bombed out city center and exchanges fire with unseen fighters.

“Prisoners of Tradition: Women in Afghanistan,” Center for Investigative Reporting :

Although the war in Afghanistan is winding down for Americans, Afghan women are still fighting a battle of their own for greater freedoms and civil rights. Violence against women is still the norm in a country where an estimated 70 to 80 percent of marriages are forced. This week brought news of another a tragic story about the suicide of two sisters in Mazar-e-Sharif overcome by despair in a web of forbidden relationships and repressive cultural traditions.  “Prisoners of Tradition” goes inside two women’s prisons and finds that the majority of inmates have been punished for so-called “moral crimes” such as refusing arranged marriages or marrying without their family’s consent. Many of these women have been put in prison by their own fathers and brothers. While Afghan law has been revised to include more rights for women, judges still take extreme interpretations of Shariah law into account when passing down sentences. The documentary also visits a secret safe house where women go to escape “honor killings” by their families.

The reporter for this story uses an alias for her own protection.

Catholicism Prisoners Of Tradition The Academy Awards The I Files "the Invisible War" Vatican Inc. Video