With gun nuts hoarding bullets, will cops be disarmed? 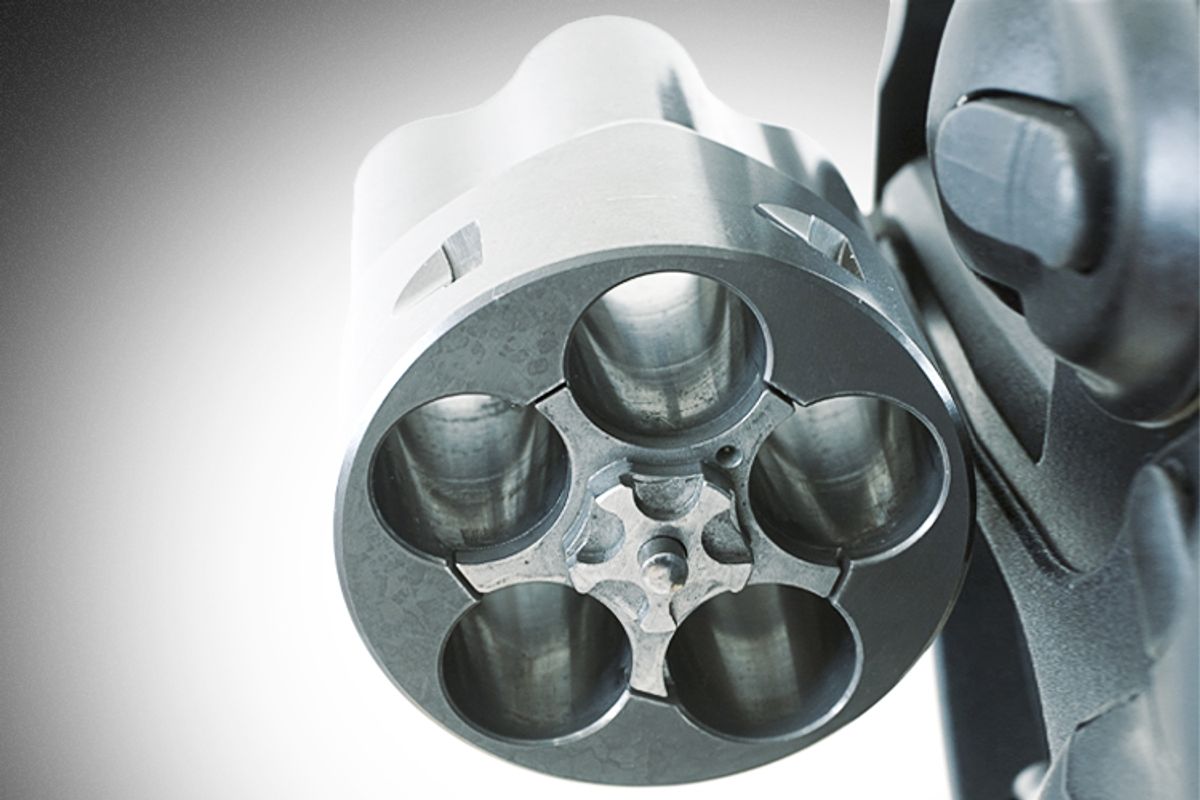 Dayne Pryor is the chief of police in Rollingwood, Texas, a small suburb of Austin. “I’ve been in law enforcement for 31 years and I’ve been a chief for eight years,” he sighs. “And it’s just one of those things that I never thought I’d have a problem with, especially being in Texas.”

Pryor’s problem, he explains to Salon, is that he’s having trouble finding ammunition and firearms for his officers, thanks to a national shortage. The cause? A run on supply from gun lovers afraid that Congress or state legislatures will impose new gun control laws in the wake of the Sandy Hook shooting.

“Everyone is thinking, they’re going to stop manufacturing, or they’re going to be taxing and all this, so it’s just this mentality of, let’s all buy up everything now just in case. And it hurts us,” Pryor said. “This is ridiculous. This shouldn’t be happening to law enforcement.”

But he’s hardly alone. Rommel Dionisio, a New York-based firearms industry analyst at Wedbush Inc., confirms the trend is a national phenomenon. “Most certainly, ammunition is in very tight supply in addition to firearms,” thanks to “consumer fears of possible bans,” he told Salon in an email.

It’s a problem that’s backed up by local news reports across the country, in which police chiefs issue similar warnings, mostly in smaller communities where departments don’t have the multiyear buying contracts and heavy financial resources of big city law enforcement agencies.

In Marinette, Wis., police chief John Mabry told the Eagle Herald, “Ammo is expensive and a lot tougher to get. People don't have it in stock and it's backordered.” In Jenks, Okla., chief Cameron Arthur told KRJH that “most police departments are having a very difficult time even getting the necessary ammunition." In Sandy Springs, Ga., police chief Terry Sult told WSB-TV his armory selves are mostly empty: "When you can't get ammunition, it is very concerning.”

In Bozeman, Mont., Sgt. Jason LaCross told KTVM, “Nobody can get us ammunition at this point.” In Tennessee, the Hamilton County Sheriff's Department told WDEF that the shortage is affecting their training.

Nima Samadi, a senior analyst at IBISWorld Market Research who tracks the guns and ammunition markets, says some ammunition manufacturers are running their supply lines almost 24 hours a day and having employees work overtime, but still can’t keep up with demand. “So they’re doing really great business,” he told Salon in an interview.

Indeed, business is booming for the firearms industry in the wake of Sandy Hook, propelled by trumped-up fears of gun control. And it’s not the first time. There was a huge surge in gun and ammo purchases in late 2008 after the election of Barack Obama. The market did not stabilize until late 2010 or 2011. And observers say the current shortage may be even more severe than the previous one.

The round of “panic buying” in 2008 was mostly constrained to assault rifles and didn’t last very long, Chief Pryor said. “But what happened this year, when it kicked in, it was just across the board, across the country, ammunition shortage, firearms shortage, with no end in sight.”

In 2008, the fears proved entirely unfounded, as Obama did nothing on gun control during his first four years in office. Now, Congress may act, but the stockpiling of guns and ammo is almost equally irrational. No one has seriously proposed bans on any kind of guns aside from assault rifles, and even that proposal was dead upon arrival (and now it’s really dead). And no one in power -- Chris Rock doesn’t count -- has proposed major restrictions on bullets, making the run on ammunition particularly unfounded.

“This shortage is all perception based,” Samadi says. “It’s all ultimately a reflection of fears over potential gun laws and people ramping up their purchases to stockpile.”

In fact, the “gun control” package emerging in Congress will not even touch a single gun, but deals entirely with the process around guns -- background checks, trafficking laws, mental health, etc.

“It only takes one congressman somewhere to suggest that they’re going to, perhaps, restrict online gun sales or something like that, for a whole story line to be created around it to stoke the fires about a potential change in the laws that will probably never happen,” Samadi adds.

And there are plenty of members of Congress making hyperbolic claims about gun control, and a right-wing media eager to heighten and repeat the warnings. Not to mention the NRA, the most powerful voice on guns in the country and the market leader on paranoid gun rhetoric for decades.

But what those rushing to stockpile guns and ammo seem to miss is that their actions have consequences on the people whose job it is to keep us safe. Pro-gun rhetoric often pits armed citizens against the slow response time of police officers. Here, the conflict is brought to life.

Jim Bueermann, the president of the Police Foundation, a Washington-based research nonprofit, tells Salon that departments are being hit with a double whammy by this shortage. During the recession, most reduced their stockpiles and thinned their supply chain to keep costs down, so when the shortage hit, they were left with low inventory and no way to replenish it.

He experienced shortages firsthand when he served as chief of police in Redlands, Calif, and said, “It caused serious problems for us.”

While the bullets cops carry in their weapons as they walk the beat are probably safe, “The primary impact of the shortage is on training -- due both to delays in obtaining ammunition and the increase in cost,” explained Darrel Stephens, the executive director of the Major Cities Chiefs Association, in an email to Salon.

Police officers return to the shooting range several times a year to keep up with qualifications, so departments consume a lot of ammunition. This is to keep officers’ skills sharp, but also for liability reasons, the experts said. Now, many are reporting having to cut back on the frequency of these exercises for their officers, and some are even forced to use service ammunition for training.

“Smaller agencies are much more sensitive to these kinds of budgetary constraints,” Bueermann says, “and they’re not going to have the resources to stockpile supplies.”