Mr. President, you won the election, not them! 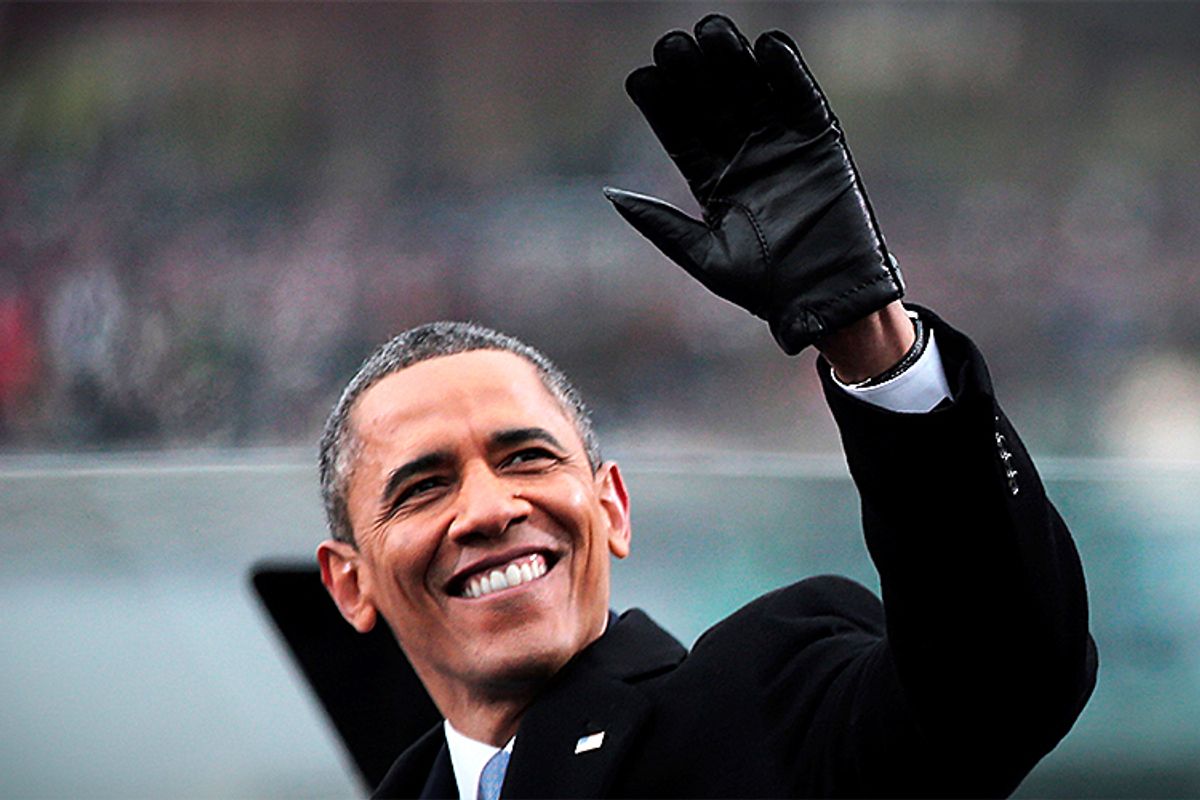 President Obama’s 2012 campaign manager, Jim Messina, is a politics-over-policy guy. So it was interesting to hear him confess to ABC News last week that he only had two “white knuckle moments” during the reelection push – and one of them was after the awful August 2011 debt-ceiling deal (the other was Obama’s poor showing in the first debate, which rabid Obama defenders insisted was a fiction made up by Chris Matthews).

Of course, Messina’s reaction to the debt-ceiling deal had to do with politics, not policy, but it’s still revealing. “After the August debt-limit crisis … our numbers were, you know, historically low,” the political whiz said.

Indeed. After Obama and GOP leaders made a deal to avert a default – resulting in the ugly sequester cuts that are currently taking their toll on the economy as well as on Obama’s popularity – the president’s approval rating reached an all-time low. Gallup tracking polls had him at 39 percent in mid-August, which was the first time he’d dipped below the treacherous 40 percent mark as president.

Even more worrisome, there was evidence that voters disapproved of the way Obama handled the debt-ceiling crisis. A third of independents told pollsters they thought he didn’t fight Republicans hard enough – and a majority of Democratic-leaning independents, the real electoral prize for the president, felt that way. Obama’s numbers only climbed after he dropped his placating stance, crusaded for a jobs bill and developed a new populist tone. That’s all history.

Yet it’s history the administration doesn’t seem to remember, or, to be fair, apparently remembers differently. White House sources are now telling reporters that the president is “strongly considering” including entitlement cuts in his 2014 budget, to be introduced around April 10. The budget could lay out precise cuts to Social Security and Medicare, as well as Medicaid, that the president has reportedly been offering in futile negotiations with Republicans, but that he’s never officially spelled out.

The Wall Street Journal reported Friday that the budget will likely include the chained CPI for Social Security. "We and all of the groups engaged on this are starting to feel it may well be in the budget," AARP vice president Nancy LeaMond told the WSJ. The same day the New York Times revealed that Obama and House Republicans are getting close to agreement on a package of Medicare cuts that would restructure Medicare parts A and B – one covers hospitalization, the other doctors’ visits -- to raise deductibles for the 80 percent of seniors who see doctors but don’t require hospitalization in any given year. The Times reports that some version of the proposal might also find its way into the 2014 budget.

Including entitlement curbs would be notable, the WSJ’s Damien Parella notes, “as Republicans often have criticized the White House for offering such steps in private negotiations but never fully embracing them as part of an official budget plan.”

But if he's now embracing them publicly, doesn't that remove them as something to bargain over?

OK, I’d rather not see Obama make that deal, because I think it’s bad policy. As a New York Times editorial argued Sunday, less than half of 55- to 64-year-olds have any retirement savings, and of those who've managed to save, half have less than $120,000. It's also bad politics: Watch for Republicans to hang those cuts around the neck of Democrats for years to come. But in the context of a big deal that raises revenue, they’re at least debatable.

But putting them in a budget document with the president’s name on it, without getting anything in exchange? No one in the Senate wants his or her name on chained CPI: 10 days ago by voice vote they backed a measure by Sen. Bernie Sanders specifically opposing a switch to the chained CPI. No voice was raised on the other side.

The president’s political folks know that his futile crusade for compromise with Republicans at any cost hurt him politically. Jim Messina called the debt-ceiling debacle a “white knuckle moment” for the 2012 reelection campaign. So what would be different now (for Democrats, anyway; the president doesn't have to face reelection)?

Obama is likely to defend such proposed cuts as necessary to afford investment in programs for young people, including a new and necessary push for preschool. As Paul Krugman explained so eloquently – and as I’ve argued here and here – deficit-cutting is now being defended as “for the children.”

It’s as if someone sent out a memo saying that the Chicken Little act, with its repeated warnings of a U.S. debt crisis that keeps not happening, has outlived its usefulness. Suddenly, the argument has changed: It’s not about the crisis next month; it’s about the long run, about not cheating our children. The deficit, we’re told, is really a moral issue.

We are of course cheating our children, but it’s not with entitlement spending; it’s with 30 years of tax cutting and disinvestment in education. Today, we cheat them by ignoring the joblessness and poverty of their parents, while acting like education is a reliable ticket out of poverty, when for too many kids, it won't be.