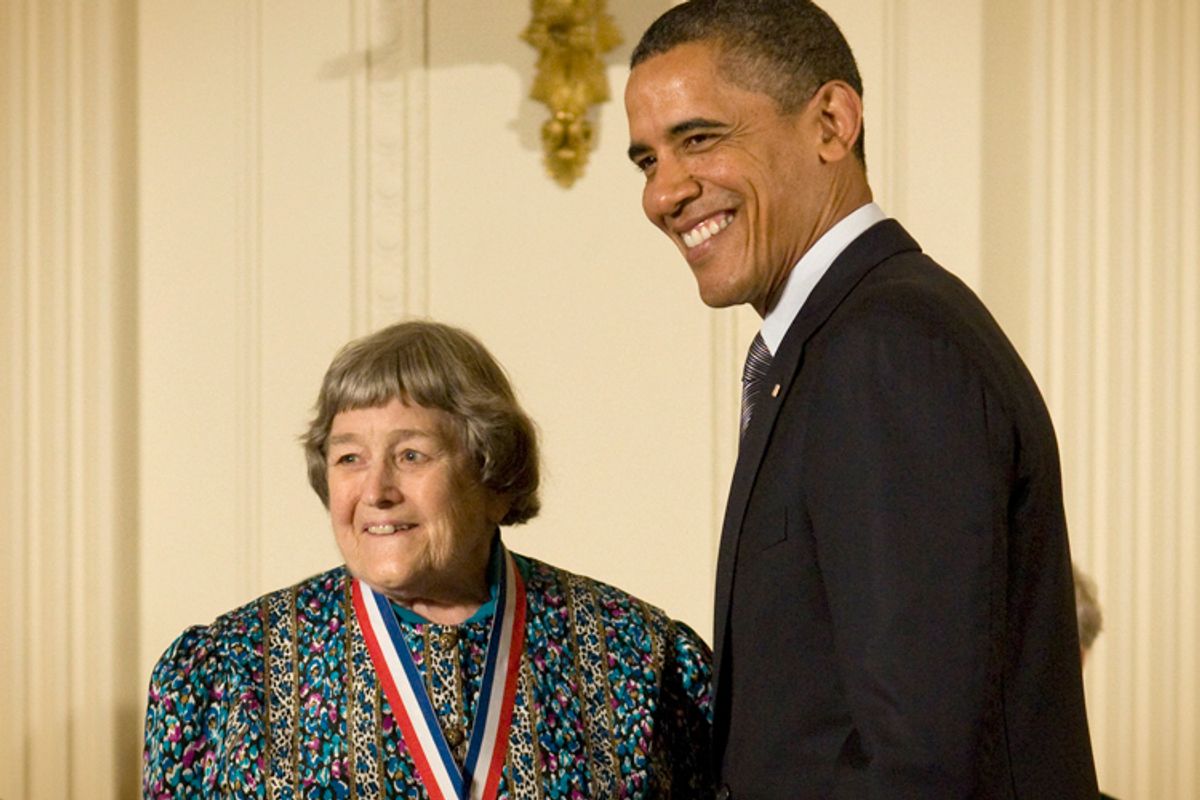 Easiest quiz you'll take today: Let's say an eminent scientist and inventor, an individual who worked on the first American satellite designs, dies after a long and distinguished career. Why would the first thing mentioned in the New York Times obituary be in praise of said scientist's cooking skills? Did you say, because the scientist was a woman? You win! And by "win," I mean, get to bang your head against your desk in a slow and methodical manner until the rage subsides.

When Yvonne Brill, who died last week at age 88, was remembered in the New York Times over the weekend, the first paragraph of her obituary described her as a woman who "made a mean beef stroganoff, followed her husband from job to job and took eight years off from work to raise three children. She was also, according to her son Matthew, 'The world’s best mom.'" It was only in the second graph that the paper of record got around to mentioning that stroganoff champ, husband follower and awesome mom Brill also "invented a propulsion system to help keep communications satellites from slipping out of their orbits." Oh, that too.

Unshockingly, it didn't take long for a chorus of "What the what?" to rise up among Times readers. As Edward Champion mused on Twitter, picture a Times obit on the lines of "Mahatma Gandhi made a great frittata, ironed some shirts, and took eight years off to catch up on Hardy Boys books." And the paper's public editor Margaret Sullivan, who has been commendably on the ball about pointing out sexism at the paper in the past, tweeted that "I sure agree" about the way the obit was handled. Yet the Times' sloppy version of amending Douglas Martin's article was to simply replace the stroganoff reference in the first sentence with "She was a brilliant rocket scientist." A brilliant rocket scientist who followed her husband from job to job and took eight years off from work to raise three children and was the world's best mom. Want to take one more crack at that, anybody?

On BuzzFeed, Shani O. Hilton observed that "I find it kind of hard to believe that the Times would start an obituary for a man this way." It's true. When Francis H. C. Crick, co-discoverer of the structure of DNA,  died in 2004, his obit enthused about his professional achievements and intellectual vigor. Hans Bethe's obit is silent on how he excelled at parenting but does describe him in a familial context – as the "father of Nuclear Astrophysics."

Yet to be fair to the Times, it's rarely been so blatantly gender obsessed about other accomplished women too. Sure, Elinor Ostrom's obit last year noted in its first sentence that she was "the only woman to win the Nobel Memorial Prize in Economic Science"  Similarly, Sally Ride's 2012 obit described her in its first sentence as "the first American woman to fly in space." And the headline for Kalpana Chawla's obituary was not that she was an astronaut but that she was "quiet and modest-- but also determined," but hey. At least Gertrude Elion's 1999 obit progressively mentioned her first as a Nobel Prize winner and only later as one who "broke down sex barriers in the male-dominated world of scientific research."

It is, of course, notable when women pave the way for others. Yet as Sullivan points out, a prescient Columbia Journalism Review story in March reminds that we need to do better than keep rehashing stories that treat the "subject’s sex as her most defining detail," falling back on the tropes like "her child-care arrangements" and "how she nurtures her underlings." Or as Caitlin Moran has explained her smell test for these kinds of issues: Is this something men have to be worried about?

Writing in the Washington Post, Melinda Henneberger laughed off the whole Times controversy as an "attempt to be light" -- which in itself is a variation of the old "Can't you take a joke, honey?" retort whenever women point out sexist crapola. And if one day Stephen Hawking's obit kicks off with what a great husband he was or Leonard Susskind's leads with his amazing brownies, then sure, we'll all have a good chortle. But until then, women are still living in a world where we, unlike our male counterparts, are defined by our relationships to others. We are not ourselves but, as President Obama says, other people's "wives, mothers, and daughters."