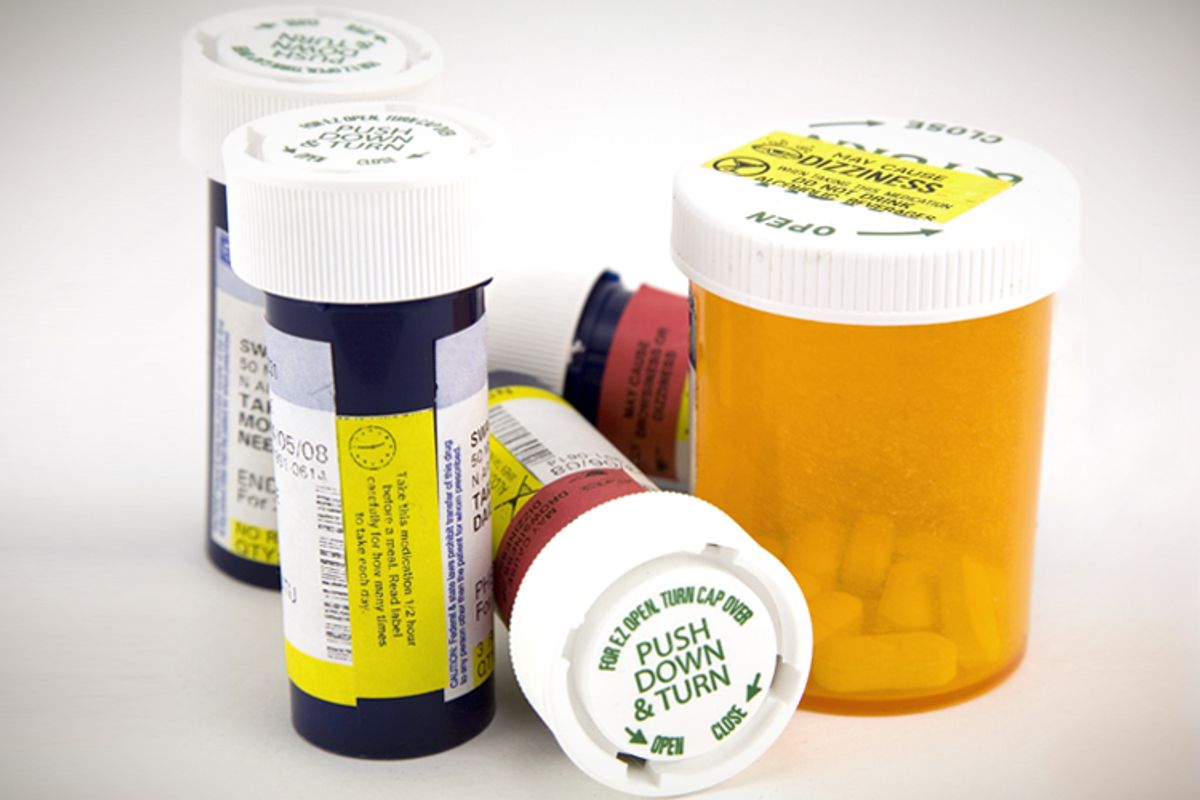 It's your worst fears confirmed, American parents. Our kids are on a lot of drugs. But the scary part is that we're the ones who put them on them.

As stunning new data from the Center for Disease Control this week reveals, 6.4 million children between the ages 4 through 17 has received a diagnosis of ADHD. That's nearly 11 percent of all school aged children, and one in five boys. A full two-thirds of them are on prescription medication. And if you think that sounds like a lot, just wait. The American Psychiatric Association is currently gearing up to broaden the definition of the condition, which will qualify even more kids for diagnosis. And with it, prepare for considerably more kids on meds. CDC director Dr. Thomas R. Frieden noted this week that "Unfortunately, [prescription] misuse appears to be growing at an alarming rate."

The mystery, for a condition that "has no definitive test," is whether we are truly in the midst of an epidemic or just an overeager rush to diagnose. And ADHD is far from the only previously unusual condition that's been exploding on late. Just two weeks ago, the CDC also announced that autism diagnoses are an all-time high, but attributed the spike as "most likely due to better ascertainment."

The glut of diagnoses and subsequent medication raises a whole raft of questions about what's happening with our children, and how we're handling it. The New York Times noted this week that, "Some parents are pressuring doctors to help with their children’s troublesome behavior and slipping grades." As pediatric neurologist Dr. William Graf says this week, "Mild symptoms are being diagnosed so readily, which goes well beyond the disorder and beyond the zone of ambiguity to pure enhancement of children who are otherwise healthy." It's an easy fix-it eagerness that begins in the cradle – a report issued Monday found that when pediatricians diagnose babies with gastroesophageal reflux disease, parents are "likely to want medicine, even if their doctor says it won't help." Even if it won't help. That's a troubling, reactive response.

The spike in ADHD diagnoses is certainly a boon to the pharmaceutical industry. The sale of stimulants like Ritalin and Adderall is a $9 billion industry. Another beneficiary? Maureen Downey hints at it in the Atlanta Journal-Constitution, noting that we are living "in an era where even kindergarten has an academic focus and where children are measured by test scores." The test-making and test-taking American educational treadmill begins at a time in a child's life when he – and it's mostly boys we're talking about here -- is still very much wired for lots of running around and playing. Schools need kids who know how to be quiet and sit still, because that's the direction schools are going in -- a system inherently gamed to favor girls. Parents want kids who perform well. And bingo, the drug companies have a jackpot on their hands, one that will, in some grades, put twice as many boys on prescription medication as girls.

There's no doubt that medication is a tremendous boon – and in many cases, an absolute lifesaver – for kids and their families who face severe disorders. But there's a certain irony in the frenzied rush to diagnose so many kids as having a frenzied disorder. And there's a strong sense that we're losing touch with our cultural ability to distinguish the normal mayhem of childhood -- and in particular boyhood -- from genuine neurological problems. As psychiatry professor James Swanson sums it up, it's not that the condition isn't real. It's just that "There’s no way that one in five high-school boys has ADHD."