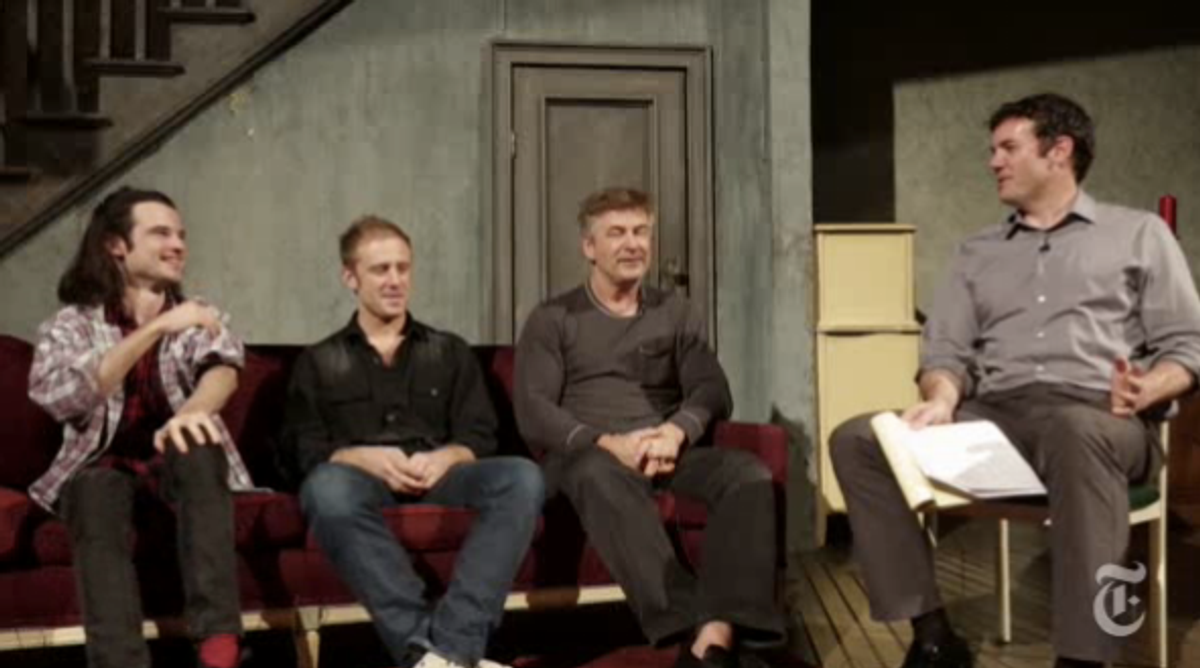 There are still a few weeks until Alec Baldwin makes his return to Broadway with "Orphans," his first project after seven seasons of "30 Rock," but the play has already been making headlines for a different sort of drama: the one unfolding behind the scenes between Baldwin and "Transformers" actor Shia LaBeouf.

The actors, both known for hot tempers, were to co-star in the 1983 Broadway play -- until "tensions as men" prompted LaBeouf's firing. LaBeouf retaliated by exposing private emails between himself and the cast, citing creative differences in February.

New York Times reporter Patrick Healy, who has been covering both the on- and offstage dramas, recently sat down with the current cast, including Baldwin, LaBeouf replacement Ben Foster and British actor Tom Sturridge. But when Healy brought up the leaked emails, Sturridge, who supported LaBeouf, got squeamish:

Healy: Did the breaking point come, Alec, when Shia dressed you down for not memorizing your lines as quickly as he had?

Sturridge: Can I say something? I think what is so beautiful about the rehearsal process is that it’s a safe place for an actor. It’s a place where you can take risks, screw up, explore, and it’s safe because it’s private. I think it’s not fair to make public or investigate what happened in the rehearsal room because that sets a precedent for people to talk about what goes on in rehearsal rooms.

Baldwin: I respect what you’re saying, but someone in the rehearsal room did go public with that information.

Healy: So, Alec, when Shia went after you about not knowing your lines, what went through your head?

Sturridge: But that’s what I’m talking about. I feel like rehearsal was a safe place. We’ve had arguments in the rehearsal process. I feel like you trying to ask questions on that means you can go into any rehearsal room and ask questions — like on “Golden Boy,” did you guys have a fight about the shoe color?

Healy: Tom, how did you feel about Shia tweeting your private email?

Baldwin: [adopting a theatrical British accent] His feelings about it are private.

Healy politely responded yes, explaining that as a reporter it's part of his job.

At this point, Sturridge had had enough: "It’s not your job to read them. I think that’s extraordinarily ethically questionable. It was a private email, and you read it."