Top 5 investigative videos of the week: Boston's day of terror

From "Explosions at the Boston Marathon" to "In Jennifer's Room," a look at the best docs YouTube has to offer 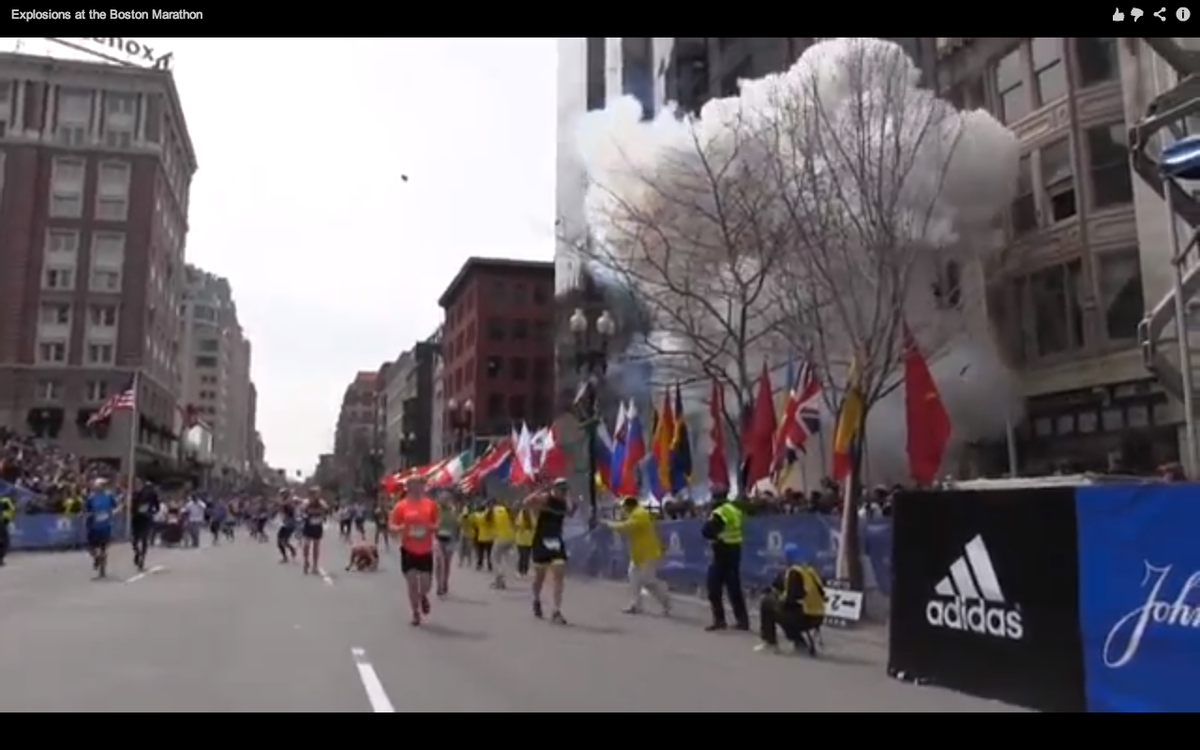 Scene still from "Explosions at the Boston Marathon"
--

This piece originally appeared on cironline.org.

A death squad leader becomes a whistle-blower, a war-torn country experiments with democracy and investigative journalists reveal the secrets behind offshore tax shelters for the very wealthy. These are some of the stories featured in this week’s top 5 list.

As part of an ongoing partnership with Salon, The I Files team is offering our picks for the best investigative videos available online. But these are just our opinions – please let us know if there are any we’ve overlooked so we can include them on future lists.

If you’re interested in stories like these, please take a moment to subscribe to The I Files, YouTube’s one-stop investigative news source. Subscribing involves no cost, no spam and no annoying kid videos. The I Files is like an altruistic offshore tax haven, carefully assembling a hoard of great documentaries for your viewing pleasure, rather than the ill-gotten gains of kleptomaniac despots.

“Explosions at the Boston Marathon,” Steve Silva for The Boston Globe

By now, you have probably seen many different images of the chaos and carnage from the bombings at the Boston Marathon. The tragedy has become something akin to the video heard round the world — an example of the ubiquity and power of raw and spontaneous citizen journalism. After a recent call by authorities to send them all available videos, these short eyewitness accounts might also become evidence in the ongoing investigation to find those responsible.

The I Files team wrestled over which, if any, of these videos to include this week. Many of these accounts are quite graphic and undoubtedly upsetting. In the end, we thought this short piece from Boston Globe producer Steve Silva was emblematic of what was captured and disseminated that day. Silva was taking photos near the race’s finish line when the first bomb went off. As he ran toward the scene, he captured not only the chaos and devastation of those first few minutes, but also his own shocked and disbelieving reaction. With more than 20 million views as of this writing, his attempt to process the events of the day mirrors our own.

How do you make a documentary with no photos, no audio interviews and no compelling visuals? That’s the challenge the digital team at the Center for Investigative Reporting’s California Watch project faced in looking to tell the story of a developmentally disabled woman who was abused at a California state-run institution. Senior Multimedia Producer Carrie Ching decided to use graphic-novel-like illustrations to approach the sensitive story. The stark illustrations by Marina Luz are based on court documents and other reported evidence. A voice actor reads the words of the victim’s mother, who wished to remain anonymous.

“In Jennifer’s Room” is part of a reporting package that recently won George Polk and IRE awards and was named a finalist for a Pulitzer Prize in the public service category.

The video presents the disturbing story of Jennifer, a young woman with severe intellectual disabilities who was raped and became pregnant while she was a patient at a state-run care center. She is one of dozens of patients who have accused caregivers of molestation and rape at these institutions over the past few years. Only one of these accusations resulted in an arrest because the cases often become a matter of the words of staff members against those of mentally disabled patients.

“I feel bad for the people who don’t have anyone to fight for them,” Jennifer’s mother says in the video. “There are a lot of them. They don’t have any family. I told them when we were there, you know, ‘I was a hands-on mom and I fought you for my daughter’s security, and I still wasn’t able to protect her.’ Who protects these people?”

“I killed lots of people then. At the time, in my opinion, I was doing the right thing.”

Claudio Antonio Guerra used to lead one of Brazil’s clandestine death squads, whose mission was to assassinate enemies of the regime and make them disappear. Between 1964 and 1985, Brazil was ruled by a military dictatorship that frequently was accused of human-rights abuses and savage political repression. Last year, President Dilma Rousseff, herself a former left-wing activist who was detained and tortured by the regime’s security police, created a truth commission to finally investigate the abuses committed during that time.

“All the President’s Torturers” chronicles the confessions of Guerra, the only member of the former security forces thus far to respond to the truth commission’s call for information. The former death squad leader now has become an evangelical Christian who says he is looking for redemption. He leads the filmmakers on a dark journey into the past, confessing for the first time about the widespread killing of activists – even showing the furnace where bodies were disposed. He offers a firsthand account of how the Brazilian government brutally tortured and killed its own people.

At one point, Guerra sorts through pictures from his former life that he now disdains. The most striking photograph is an image of him gripping a gun that he points menacingly at the camera.

“A 3-D version of this picture was hanging in my office,” he explains. “When a person came in, the gun followed him. Wherever that person went, the gun would point at him. It was a special effect,” Guerra chuckles ruefully. “I was such an idiot.”

“How to Build a Country from Scratch,” Florence Martin-Kessler and Anne Poiret for The New York Times’ Op-Docs

South Sudan has the distinction of being the world’s newest country. After a 50-year civil war that left millions dead, the landlocked country gained independence in 2011. Since then, the new government has been struggling to assert control over the nation and provide basic services to almost 11.5 million citizens. Everything in the new state must be created from scratch – from the name of the country and design of the flag to its constitution and judicial system.

Filmmakers Florence Martin-Kessler and Anne Poiret spent a year filming in South Sudan for their upcoming documentary, “State Builders.” They trace the country’s journey from its first day of independence through its struggles as a fledgling democracy, switching between the perspectives of a UN worker trying to advise the new state and South Sudan’s newly appointed vice president, the former guerilla leader Riek Machar.

In this excerpt for The New York Times’ Op-Doc series, the filmmakers distill their footage into a slightly tongue-in-cheek 12-step plan on how to establish the world’s newest state. Starting with Step 1 (Start to Panic), they offer a fly-on-the-wall glimpse into the backroom discussions (Step 2: Pick a Name) and the unexpected obstacles behind the launching of a country (Step 11: Refrain from Invading Your Neighbor).

This week, President Salva Kiir Mayardit stripped Machar of many of his powers of office, most likely as a preemptive strike before the country’s next presidential election. It’s a sign that South Sudan still faces many more road bumps as it struggles to realize its democratic potential.

“Tax Havens 101,” The International Consortium of Investigative Journalists and The Washington Post

Now that you’ve filed your tax return – or at least have gotten a hasty extension – you can take a moment to see how the financial elite avoid these sorts of burdens altogether. It’s totally legal and completely maddening.

This animated primer explains the tricks used by politicians, con men, corporations and the plain old filthy rich to skirt the rules and hide assets anonymously in offshore accounts. Half of all global trade passes through these offshore tax havens, and one-third of the world’s wealth resides there. With stylized illustrations set to the dulcet strains of island music, “Tax Havens 101” illustrates how these offshore schemes cost all of us money and help abet international abuses such as the Enron scandal, the Bernie Madoff affair and the Greek debt crisis.

Produced by the International Consortium of Investigative Journalists in association with The Washington Post, this video is a small piece of an unprecedented international investigation into offshore secrecy. More than 86 journalists from 46 countries collaborated to sift through millions of leaked records — a cache of documents 160 times larger than the WikiLeaks papers released in 2010. The yearlong investigation exposed the hidden dealings of government officials who have cloaked revenue in covert companies and bank accounts, the tax advantages enjoyed by the ultra-rich that aren’t available to ordinary people and the complicity of the world’s top banks in helping to abet these schemes.

We’ll have to see if TurboTax incorporates some of these elements in its future calculations.