The Gulf Coast may never recover 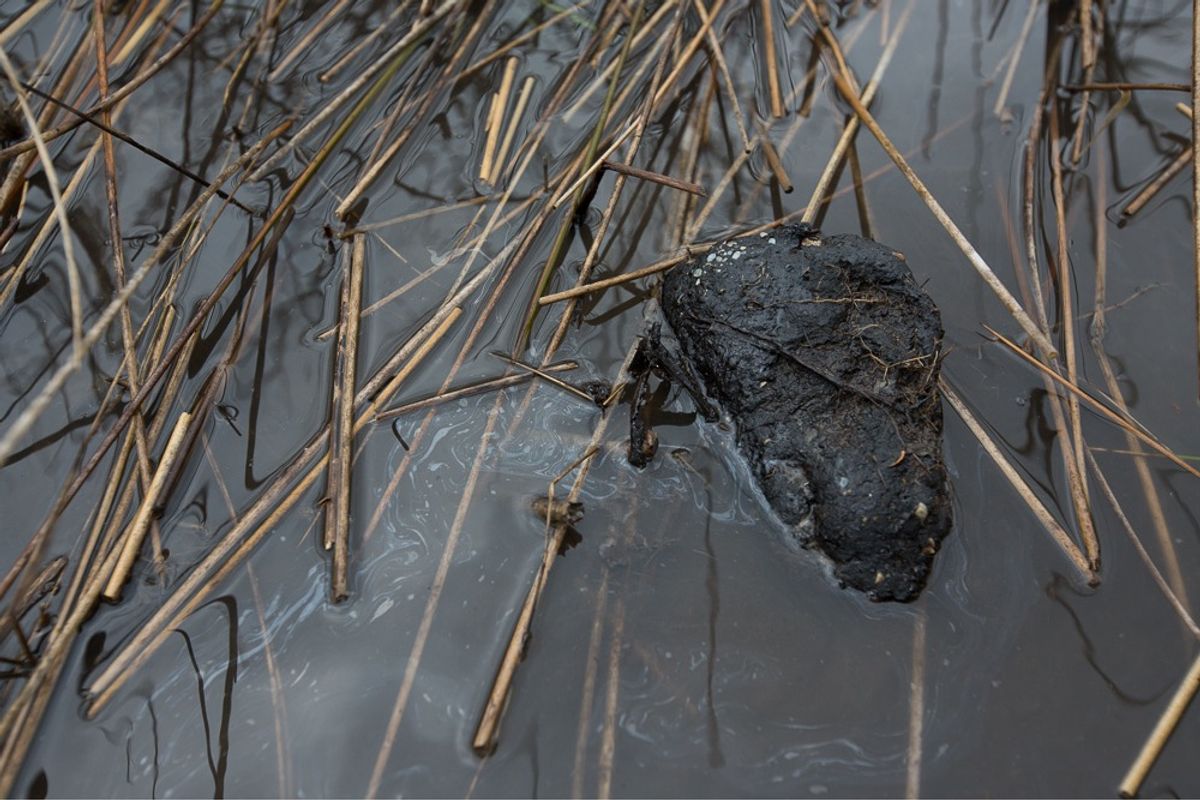 Oil in the marshes of Bay Jimmy, Louisiana. The area was particularly affected by the BP spill. (Julie Dermansky)
--

Three years after an explosion at British Petroleum’s Deepwater Horizon rig in the Gulf of Mexico killed 11 workers, injured dozens, and set off the worst oil spill in the history of the petroleum industry, the waters along Gulf Coast seem almost back to normal. Much of the oil is gone. New Orleans-based photographer Julie Dermansky says there’s still a lot left. The oil, she says, is often hard to locate because it has a tendency to play hide and seek. Dermansky, who photographed the spill in 2010 “pretty much non-stop for four months," has been doggedly following the story for the past three years — reading up all the research she can lay her hands on, making trips out to the worst impacted areas in Louisiana every few months, and talking to people from affected communities. In the early days of the spill she was hired by several major publications, including The Times, London, The Washington Post, and Der Spiegel. But these days she travels without assignment, covering expenses on her own, since few publications hire photographers or reporters to cover what’s now an old news story. Last week, Dermansky again visited the beaches and marshes along the Louisiana and Mississippi coast — some of the worst hit areas where crews are still cleaning up tar mats and tar balls. I spoke with Dermansky via email and over the phone about her trip and her assessment of the situation in the Gulf Coast.

All photos copyright Julie Dermansky. Click on this photo to view a slideshow.

What did you find during your recent trip out to Grand Isle, Bay Jimmy in Louisiana, and the Mississippi coast?

There was oil sheen stirred up from the turbulence in the Bay Jimmy. PJ Hahn Plaquemines Parish director of coastal zone management, who I accompanied on an oil spotting trip, turned over some of the dead marsh grass and exposed roots covered in hardened oil. There was also hardened oil on top of some of the surface we walked on. With each step on the surface, an oil sheen spread around my boots. Much of the vegetation there is now dead. That’s tragic as with less vegetation, coastal erosion, already a problem before the spill, has intensified. A rainbow oil sheen has moved over parts of the marsh surface. There were signs of life though: small crabs moving around, snails and, raccoon paw prints.

On Grand Isle, at the state park, I found tar balls ranging from the size of a quarter to eight inches long. The beach was not blanketed in them but you could find one every couple of feet.

On the beach in Mississippi, from Waveland to Pass Christian, I found tar balls and dead animals including a Kemp's Ridely turtle. Though finding dead animals on the beach is not uncommon, I find the quantity of dead animals on the shore in Mississippi alarming. How the animals are dying is impossible to say. There is no proof the deaths are [the] BP [disaster] related as none of the scientific studies done on the dolphins and sea turtles have been released. The results of those studies are controlled by the NRDA [Natural Resources Damage Assessment] and are part the evidence being used in the current civil trial going on against BP in New Orleans.

You mentioned earlier that this is a difficult story to cover because of the "hide and seek oil plays." Could you elaborate on that?

From the start of covering the spill it was every photojournalist's task to find the oil. There would be a sighting one day and if you could get yourself out to those coordinates you very well may have found it gone. Odds are it wouldn't be in the same place. It kept, and keeps, moving with the tides. Last week the tide was higher than usual and there was a south wind, so odds were if you went to Bay Jimmy where the oil had hit the hardest, you wouldn’t find anything. When I went on Monday (April 15) with PJ Hahn, he was surprised and saddened we found as much as we did.

It is the same with the beaches. You can read/see a report of tar balls at a beach and go the next day and not find any.

You've been recording the impact of the spill for three years now, what are your thoughts on the clean up?

Each oil spill is different and in some instances, like this one, unprecedented. I'd have to say in this case the clean up effort was/is inadequate.

Many factors play into any spill. The depth the oil is coming from, the kind of oil (crude or refined) how an area’s tides will affect where the oil hits the shore, what a storm will do to the spread of the oil etc. — all factors in how a clean up will need to happen. Since these things can't be predicted, there is no perfect clean up scenario. On top of that, reports I read indicate that clean up materials, vessels, booms etc, needed to contain and clean up the spill were not on hand when the Macondo well blew up.

From what I saw of the initial clean up, it didn't make sense to me. Many of the oiled pelicans that died, died needlessly. Booms were put up around barrier islands that serve as pelican rookeries. The booms collected oil into what became a death trap that many pelicans landed directly in. The areas the oil collected in the boom could have been vacuumed

Since the response seemed ragtag, Plaquemines Parish president Billy Nungesser set up his own taskforce and used Shop-Vacs to vacuum the surface of Bay Jimmy. The idea caught on and then BP and the Coastguard; brought in industrial vacuuming setups for the job.

Early on BP chose to dump large quantities of controversial dispersants. Other non toxic options to break up the oil were offered as solutions, but BP choose not to use them.

The clean up, along with all other factors of the spill, leave us with more questions than answers.

What are the key challenges those working to restore the environment here are facing?

The key factor is getting the funding to start restoration projects The money BP has had to pay for restoring the coast has been set aside (a $1 billion advance payment was settled upon) but not released and it is unclear who will get what to get the job done. Restoring the marsh must start fast because it landmass is eroding at a faster clip since the spill.

How good/bad do you think the situation is now?

The barrier islands look very bad to me, but one must note they were in trouble before the spill due to coastal erosion. I have no doubt the spill has sped up the process. I have seen some of the smaller islands, that birds nest on, literally disappear in the past three years. The oil killed the marsh grass and the mangrove roots leaving the islands with nothing to hold them together and now some are completely gone.

As far as the amount of tar balls washing up on beaches — it varies from day to day. BP's claims that the Gulf Coast is back to normal are simply not true.

How the oil is affecting people's health is another issue, and as with the impact on wildlife, answering this question without scientific data is impossible.

I think anyone who professes to know what the long-term impact on the Gulf will be is not credible. It is too early to know if there will be a collapse of any of the species in the food chain, if the seafood is safe or not, and if people who lived close to the spill, or worked to clean it up, will suffer long term impacts.

How are local communities coping with the impact three years on?

Most people I know who have been directly affected by the spill have lost faith in the recovery process. They tried to give BP the benefit of the doubt and work with [claims czar Kenneth] Feinberg, who was tasked by BP to handle the claims after the initial claims process failed. People were asked to fill out paperwork over and over again and their claims were still rejected for reasons not made clear to them. No one seems satisfied that their elected officials fought the fight for them. Most of them don't believe any money will trickle down to them at all.

For some, there has been no recovery and they are left barely scraping by. Those fighting BP in the courts fear that only the lawyers will come out ahead.

The Vietnamese community has had a particularly hard time coming up with claim figures since much of their income was based on a barter system. The language barrier has been an added issue for them. Many in that community have given up and moved on.

The people I’ve met who have received some money in the initial claims process don’t feel justly compensated either.

How the rest of the funds will be distributed is still unclear. BP just tried to challenge some of the claims their own appointed claims czar put in. A judge blocked that challenge however.

What has been the most difficult part of covering this story?

The most alarming thing for me was that BP controlled media access and the Coast Guard and local governments acquiesced. Detail police where hired by BP to stop journalists like myself from documenting the spill. This is going on again in Arkansas with the EXXON pipeline spill. I find this policy highly objectionable. During the BP spill the mainstream press fought back and BP had to back down, but overall it was always a battle to get close to the oil.

I managed to get to some beaches the day the oil hit for the first time, before they had been closed down. I did whatever it took to get my images. I challenged BP officials who asked for my ID by asking them for theirs and letting them know, I don't answer to BP. The media should have access to industrial disaster areas if the public is ever going to get a true picture of the damage.