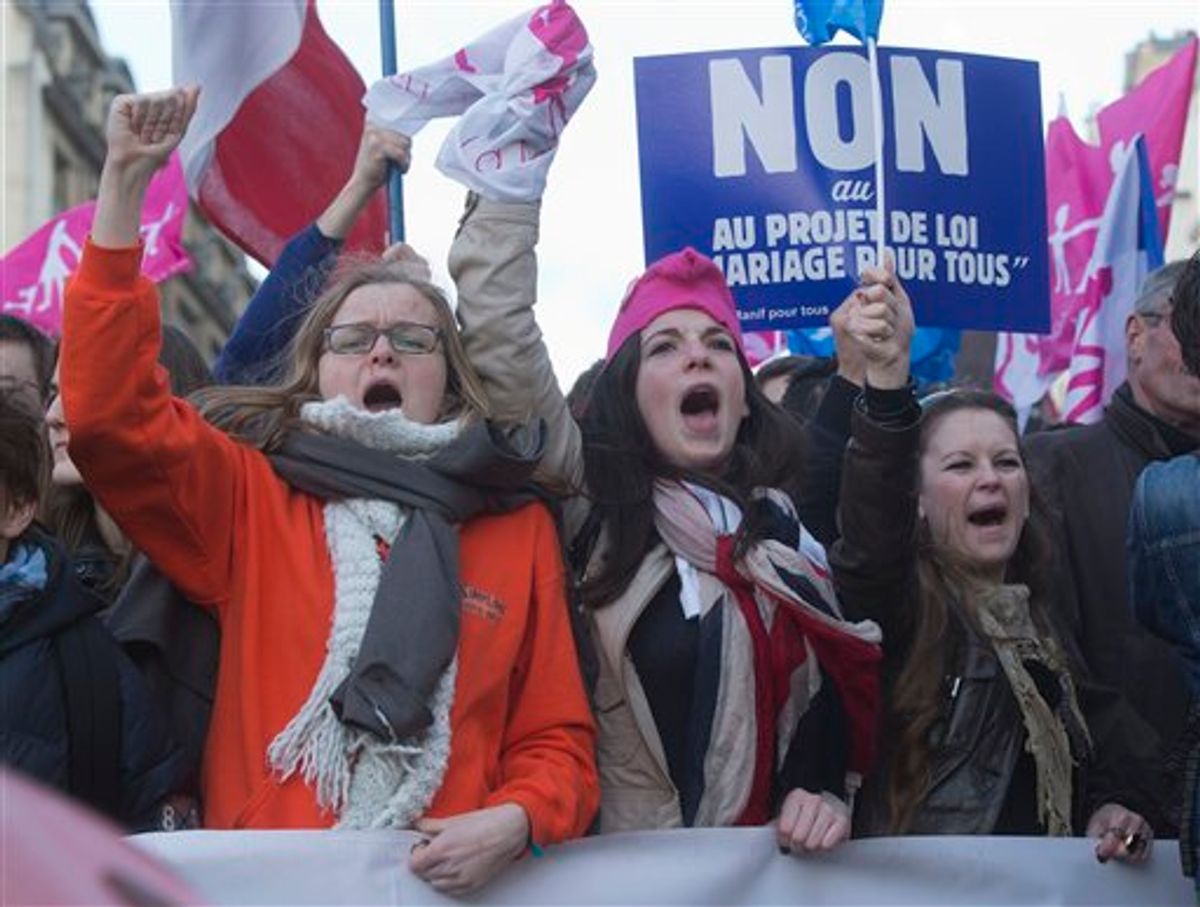 But even with wide voting margins in the legislature and popular support among the public, opposition to the measure that would grant equal marriage and adoption rights to same-sex couples has intensified in recent weeks. Protests in Paris have turned violent, and gay couples have been the victims of vicious assaults.

At the margins, the demonstrations have also become more violent and homophobic, with a series of nightly demonstrations last week around Parliament that resulted in clashes with riot police officers and a number of arrests. Even opposition leaders have bemoaned the way harder-right groups have infiltrated the demonstrations, and there has been a small surge in violence against gay men and lesbians, with some beatings and angry, offensive words on social media.

Two weeks ago, a Dutch-born man walking with his partner in Paris was beaten up. The man, Wilfred de Bruijn, posted a photograph of his bloodied face on his Facebook page, calling it “the face of Homophobia.” It has been shared thousands of times. Last week, two gay bars, in Bordeaux and Lille, were attacked, and a same-sex couple was attacked Saturday in Nice outside a gay nightclub.

As a result of the violent surge against the measure, French President François Hollande and the legislature have pushed to approve the bill quickly, hoping to pass it and "put the matter behind them," according to presidential aides. But even with an accelerated process and a vote scheduled for Tuesday, controversy and violent rhetoric persist:

On Monday, Manuel Valls, the interior minister, accused protesters and political opponents on the right of “unleashing homophobic speech.” Speaking to Europe 1 radio, Mr. Valls conceded that opponents of the bill were “numerous,” but said they represented “a minority compared to the millions” who voted for Mr. Hollande as president a year ago, when he promised to pass a same-sex marriage bill in his first year in office.

Also on Monday, the president of the National Assembly received a letter threatening “war” and attacks on Socialist lawmakers if the lower house approved the legislation, the French news media reported. The letter was said to have contained gunpowder.

Despite the heated rhetoric, equal rights supporters remain confident that the measure will pass, and that popular support will eventually overcome the small, but vocal, minority of conservative and religious groups who oppose it. As the Times notes, more than half of the countries in the European Union have civil union or marriage equality laws on the books, and, it seems, momentum is on the side of equality, as Pierre Bréchon, a political scientist at the Grenoble Institute of Political Studies told the Times: “The movement is clear. It is gradual, but it is clear.”