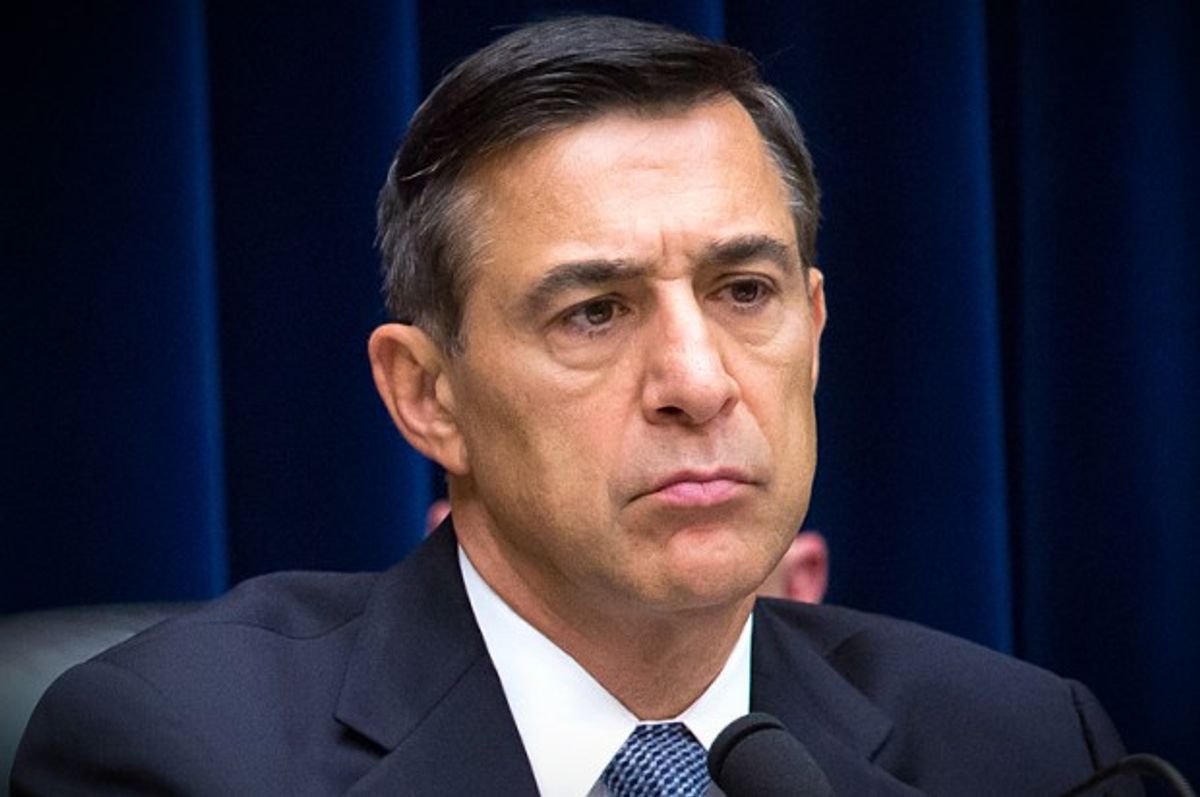 The Benghazi talking points were (still) the talk of the morning with the Sunday politico set, bringing in Rep. Darrell Issa (R-CA), Sen. John McCain (R-AZ), Sen. Harry Reid (D-NV), Former Secretary of Defense Robert Gates and others to discuss the revisions made to the Obama Administration's talking points following the Benghazi attack. (Controversy, sure. Cover up? Well, not really.)

House Oversight and Government Reform Committee Chairman Darrell Issa tells "Meet the Press" that Hillary Clinton is "not a target" of the Benghazi probe that seems to be, you know, targeting the former Secretary of State. More from NBC News:

While Hillary Clinton has stated publicly that she was not involved in that editing process, criticism of the former State Department chief and much-discussed possible presidential candidate has been a strong subtext of the Benghazi debate.

"My concern is when Hillary Clinton's name is mentioned 32 times in a hearing, then the point of the hearing is to discredit the Secretary of State, who has very high popularity and may well be a candidate for president," Feinstein said.

Sen. McCain tells Martha Raddatz that revisions to the Benghazi talking points constitute a cover up -- sort of:

MCCAIN: ...what he did say the day after is that he condemned acts of terrorism. But then that night within -- I think it was a 60 Minutes, I'm not sure -- interview and then throughout the next two weeks he kept saying that it was caused by a spontaneous demonstration, sparked by a hateful video. He kept saying that over, and over again, and condemning that. Now, Martha you've got to look at this in the context of the times there.

They're in the midst of a presidential campaign. The narrative by the Obama campaign is that Bin Laden is dead, the -- al-Qaeda is on the run, not to worry about anything. And here comes this attack on Benghazi. And there are so many questions that are unanswered. We need a select committee. But for the president's spokesman to say, well there was only words, or technical changes made in those emails, is a flat out untruth.

I like Mr. Carney, but that -- that's just not acceptable for the president's spokesman to say that to the American people when we now know any reference to active terror, any reference to al-Qaeda were removed from those talking points, and it was done at a deputy's meeting just before Susan Rice went on television.

RADDATZ: Would you call this a cover-up?

Sen. Reid weighs in (and shocks the entire nation and known universe) by revealing that political memos are usually the result of a fairly political process of balancing political interests:

RADDATZ: But let me go back to the act of terror that you say President Obama talked about the next day in the Rose Garden and that Senator McCain disputed. If the president said it was an act of terror, then why didn't that appear on the talking points?

Can the White House really have it both ways, that they say, oh wait a minute, he said act of terror, but a few days later, they take out those references. So they felt pretty confident about it if they sent the president out to say that.

REED: Well, I think -- again I think they created, through an intra-agency process, a document that everyone could agree upon. And that's almost by definition in Washington, something that is not as specific or as conclusive.

Rep. Adam Smith (D-WA) ripped into Chris Wallace for focusing on talking points at the expense of "what actually happened" in the Benghazi attack. “There was no question this was a it terrorist attack. They didn’t deny it," Smith told Wallace. "I would much rather get into investigation of the groups that threatened the U.S., figure out how they are, and how to stop them instead of debating how one memo was put together in the immediate days after the attack.”

Meanwhile, Wallace goes on to clarify, once and for all, that he is "not a potted plant.":

Former Defense Secretary Robert Gates stays out of the talking points fracas, but tells Bob Shieffer that Republican outrage over the the administration's failure to send in special forces to aid the embassy is a "cartoonish impression of military capabilities":

BOB GATES: And with respect to sending in special forces or a small group of people to try and provide help, based on everything I have read, people really didn't know what was going on in Benghazi contemporaneously.  And to send some small number of special forces or other troops in without knowing what the environment is, without knowing what the threat is, without having any intelligence in terms of what is actually going on on the ground, I think, would have been very dangerous.

And personally, I would not have approved that because we just don't it's sort of a cartoonish impression of military capabilities and military forces.  The one thing that our forces are noted for is planning and preparation before we send people in harm's way.  And there just wasn't time to do that.

BOB SCHIEFFER: But I guess that would bring up the question why not?  Why wasn't there not some force?  I mean, there were Americans there.  They-- they obviously were-- were in danger.  And there was nothing to protect them.

BOB GATES:  Well, I don't-- I don't know the circumstances leading up to Benghazi in terms of requests for additional security there at the consulate or-- or any of that.  I frankly just don't know.  These things always look a lot simpler in retrospect though.