Country music has always been feminist, even if Taylor Swift isn't

The Feminist Taylor Swift account may be a joke, but country music's long history of strong women isn't 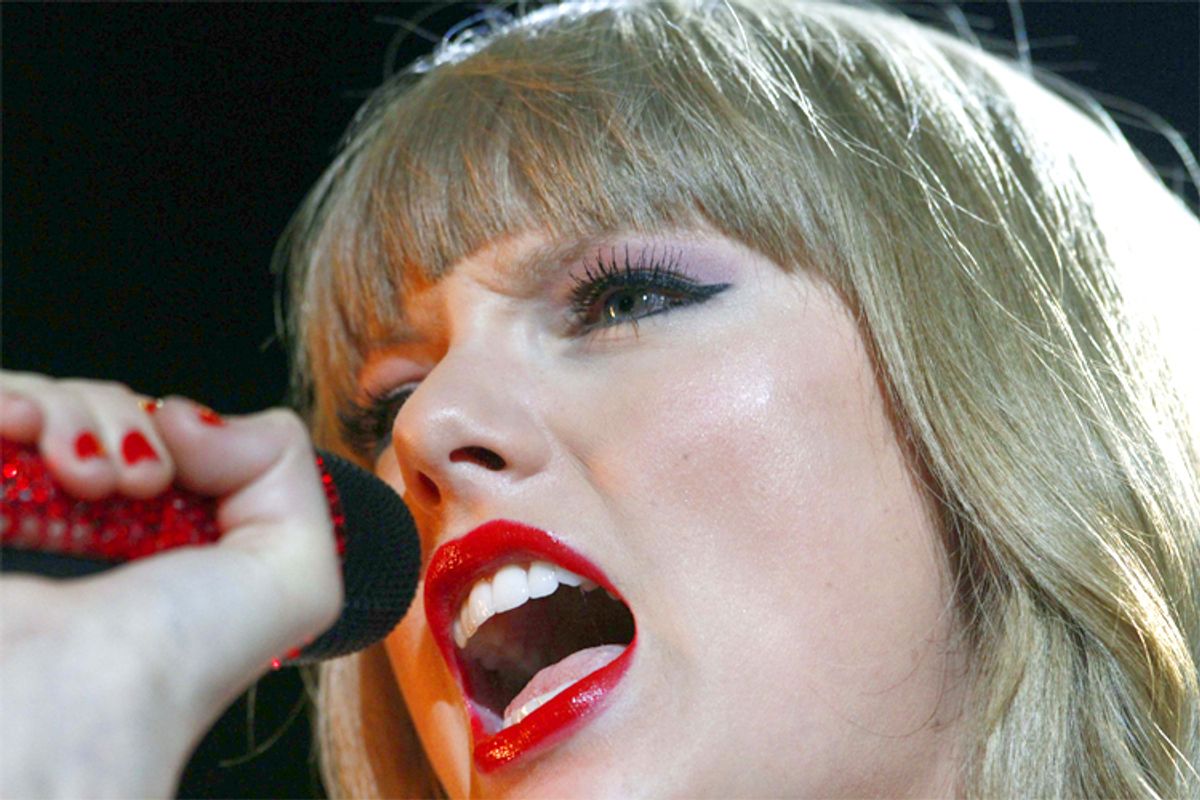 Taylor Swift might not want to be a feminist, but that hasn’t stopped the rest of us from wishing that she were. Sure, she throws us a female empowerment bone every once in a while, giving the occasional public, barely veiled middle finger to the men who have wronged her (who among us hasn’t dreamed of the opportunity to do the same?), but then she does something like picking a fight with universally idolized feminist icons Tina Fey and Amy Poehler, or refusing to identify herself as a feminist, and we find ourselves once again shaking our heads at the singer, even if we are simultaneously singing along to her undeniably catchy singles.

Yet, with the FeministTaylorSwift Twitter account garnering more than 76,000 followers in less than five days, maybe the megastar will catch on: We might know all the words to “22,” but that doesn’t mean we identify with it. Indeed, as the parody account creators recognize, there's a thin line between loving and hating Taylor Swift.  As much as we might admire the singer for flying her freak flag high with emotional, occasionally embarrassing outpourings (remember the overshare that was “Dear John?”), her lyrics can make us wish that freak flag was a little less gender normative. Or as the parody account's co-founder Clara Beyer said of its immediate popularity, “It says to me that I’m not the only one out there who is feeling this discomfort with Taylor Swift lyrics.” She added, “People know Taylor Swift lyrics. Even if they don’t want to, they know them.”

Losing the slut-shaming, gender-stereotyping, waiting-around-for-Mr.-Right motifs would not only help Swift break out of the domain of fleetingly faddish pop music, it would also allow her to join the ranks of other bold, outspoken feminist country music stars from the legendary Queen of Country Music Kitty Wells to the iconic Reba McEntire to another rising pop-country crossover star, Miranda Lambert.

Living in New York as an unabashed fan of the likes of Randy Travis, Waylon Jennings and Shania Twain, I am well acquainted with the stereotypes associated with country music: It’s formulaic (fair enough -- everyone from Willie Nelson to Sara Evans has played off of Harlan Howard’s original assessment of country music as nothing more than “three chords and the truth”), “blatant” and lacking the poetry or subtlety of other genres, and of course, overly consumed with heartache, alcohol and farm equipment.  These critics may have a point, but they’re also missing a big part of the picture. Despite Ms. Swift’s problematic lyrics, country music has long been staunchly, unapologetically feminist, even if the singers don’t necessarily come out and label themselves that way.

Themes like equality, empowerment and respect for women are a longtime staple for country songs, whether it’s a man or a woman behind the microphone.  For all the attention Brad Paisley got for “Accidental Racist,” most media outlets (Salon was a notable exception) completely ignored his domestic violence revenge fantasy, “Karate.” That song was another in a long line of such songs.  Martina McBride’s 1993 “Independence Day”, for example, turns an emotional story about an abusive husband into an uplifting song of redemption through murder.  Six years later, the Dixie Chicks sang about two friends conspiring to kill an abusive husband in the catchy “Goodbye Earl.”  And in Miranda Lambert’s 2007 “Gunpowder & Lead,” a domestic violence victim steps in where law enforcement fails, waiting to kill her husband the day he is let out of jail.  (This shouldn’t be confused with another common country trope, also arguably feminist: the cheating revenge fantasy à la Wanda Jackson’s 1969 “My Big Iron Skillet,” Garth Brooks’ 1990 “The Thunder Rolls,” or Carrie Underwood’s 2007 “Before He Cheats.")

Revenge fantasies are just the tip of the iceberg when it comes to feminist-themed country songs, which includes stories of women’s self-discovery (see: Reba McEntire’s 1992 hit, “Is There Life Out There,” Sara Evans’ 2000 “Born to Fly” or half the Dixie Chicks' repertoire, most notably, “Wide Open Spaces,” “Ready to Run” and “The Long Way Around), career struggles (Dolly Parton’s 1980 “9 to 5” is the obvious standard bearer here, but Bonnie Raitt’s 1974 “What Is Success,” Sugarland’s 2004 “Baby Girl” and even Toby Keith’s 2005 “Get Drunk and Be Somebody” play on the same theme), and being loved and accepted for who you are (listen to Martina McBride’s 1993 “My Baby Loves Me [Just the Way That I Am]” or Gretchen Wilson’s 2004 “Redneck Woman”).

For every song like Tammy Wynette’s infamous 1968 “Stand By Your Man,” imploring women to stay in broken homes, there are dozens saying just the opposite (try: Kitty Wells’ 1952 hit “It Wasn’t God Who Made Honky Tonk Angels,” Tanya Tucker’s 1991 “Down to My Last Teardrop,” Lee Ann Womack’s 2005 “He Oughta Know That by Now,” or Patty Loveless’ 1989 “Chains”).  Of course, there are also plenty of female country music singers warbling over their broken relationships, but things have changed since Crystal Gayle soulfully wept, “Don’t It Make My Brown Eyes Blue,” in 1977.  Swift would do better to take a page from the Lambert book instead: Don’t cry over a broken heart; get angry and burn the house down.

Fictional representations of women in country music also fall into this feminist paradigm. As Claire Miye wrote in the L.A. Review of Books about the starring characters on "Nashville," both Rayna James and Juliette Barnes sing about “women standing on their own, standing up for themselves, and being respected.” And even Gwyneth Paltrow’s fragile and ultimately suicidal Kelly Canter in "Country Strong" manages to punch her husband in the face.  The soundtracks reflect these characters and story lines.  The James/Barnes duet on "Nashville," “Wrong Song,” answers Wynette directly: “If you’re looking for one more chance / A little stand by your man / You’ve got the wrong song.” "Country Strong’s" titular song, meanwhile, tells a story of strength and resilience in the face of adversity: “I’m country strong / hard to break / like the ground I grew up on / You may fool me and I’ll fall / But I won’t stay down long.”

This isn’t a one-sided story.  As it turns out, the men of country music tend to show more respect for women than their mainstream counterparts, too.  They don’t drug women with Molly to get them into bed; they “sing every Willie Nelson song [they] can think of” (Big & Rich in “Save a Horse, Ride a Cowboy”). Even a notorious “ramblin’ man” like Waylon Jennings warned women against falling in love with him (“Beautiful lady are you sure that you understand / The chances you’re taking loving a free living man”) instead of bragging about his conquests like other pop artists have been known to do.  And while I’m sure some might have wanted to quote Cee Lo with a well-timed “Fuck You,” they generally prefer, like Ms. Swift, to find solace in singing about how lonely and miserable they are instead (Conway Twitty’s 1971 “Hello Darlin’” is a perfect example, as is George Jones’ 1984 “Just a Girl I Used to Know”).

Despite her many, many millions, Taylor Swift is really just a kid, with plenty of learning left to do and plenty of time to do it in. She might not want to call herself a feminist, but she should spend a little time checking out her parody account.  She might find she already is one, even if she has some trouble verbalizing it. After all, it was in response to the “Are you a feminist?” question that Swift responded, “I was raised by parents who brought me up to think if you work as hard as guys, you can go far in life.” Sounds like the perfect jumping-off point for her next album.