Gandolfini collaborator: "He felt there were enough cameras on the faces of celebrities" 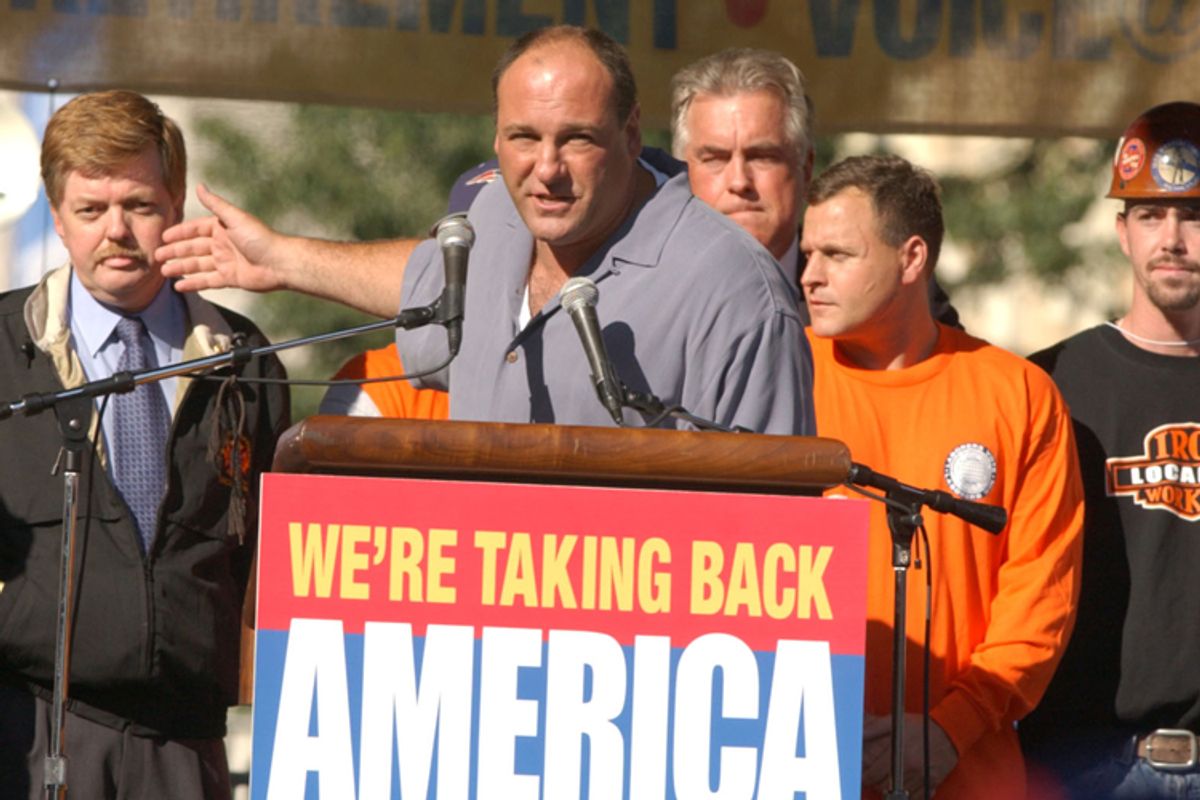 Actors, politicians, musicians and all sorts of celebrities have expressed their grief over the death of James Gandolfini. But veterans, especially wounded veterans, are also mourning the loss of a man who used his celebrity to highlight their plight.

After participating in a USO tour and visiting the Walter Reed Army Hospital, Gandolfini decided he wanted to make films about soldiers, to tell their untold stories.  He joined the board of directors of DCTV (Downtown Community Television) and was the executive producer for two more HBO-DCTV co-productions. The first collaboration was "Alive Day Memories: Home from Iraq" (2007), a moving documentary about 10 soldiers who returned from Iraq with amputations, traumatic brain injuries and severe post-traumatic stress. They recount their “alive day,” the day they almost died, to Gandolfini. Three years later, the same team produced "Wartorn 1861-2010," which looks at post-traumatic stress disorder historically and today.

Thursday, I had the opportunity to talk with "Wartorn" director Matthew O’Neill about Gandolfini -- a man who, in an industry riddled with ego and vanity, stood out for his humanity, warmth and humility.

O’Neill recalls that James Gandolfini put everyone at ease. “I was really intimidated when I first met him,” remembers O’Neill. “I’m just a documentary film producer, he’s this superstar. He’s 6-foot-4. But he couldn’t have been more engaged.  He had such a big open heart, he connected so deeply with everyone that he met … He made everyone feel that they were his equal … like they were part of a big family. “ And his warmth and tenderness quickly transformed his physically intimidating presence. “He was a hugger and kisser,” O’Neill says. This morning, shocked and grieving, Alpert and O’Neill reminisced about that distinctive tenderness. O’Neill tells me: “Jon and I were just saying that he’s one of the only men who’s ever kissed either one of us. And I’ve heard that from other people as well. He was so warm. He was such a physically generous man. He just couldn’t contain his affection and enthusiasm for other people and for life.” Going through old footage this morning, O’Neill came upon an "Alive Day Memories" clip in which soldier Jonathan Bartletts “gets a big kiss on the head from Jim.”

Not only was Gandolfini a kindly giant, but a modest one. He made a point of not having his face appear in "Alive Day Memories," insisting the veterans be the film’s stars. According to O’Neill, Gandolfini’s refrain was, “I want it to be about them, I want it to be about them.” O’Neill reflects: “what’s striking about ['Alive Day Memories'] is here’s this celebrity and actor at the absolute peak of celebrity at that point. And you never see his face in the film. He’s off camera and he wanted to keep himself off camera because his purpose in making that film was to bring attention to the men and women featured in the film. He didn’t want it to be about him. When you have someone with that kind of star power, there’s the temptation to use that to bring in audiences but that wasn’t where his vision was. His vision was having the camera on the men and women serving. He felt there were enough cameras on the faces of celebrities.”

Gandolfini was incredibally hard working: “He watched every film we made before he met with us. Before he went into any of these interviews he prepped like any great journalist in terms of the research, the details about the person he was going to meet.” For O’Neill, the talent and work ethic Gandolfini brought to acting and documentary filmmaking explains why “Jim was the only person to win three Emmys for acting and an RFK Journalism Award,” which he won for "Wartorn."

While not political, per se, Gandolfini wanted to use film to raise awareness. “He was not political in the traditional sense. He didn’t have an ax to grind,” O’Neill says. “He wasn’t saying vote for this, vote for that. He cared deeply about other people and wanted to be the best person he could be. He saw the power of TV to reach people through 'The Sopranos.' And he wanted to reach people through the films he did with us.” “He was, “ O’Neill reflects, “a mensch.”

Though Gandolfini lived to see the completion of these two documentaries, a third documentary was in the works. This time the film would focus on the ignored relationship between learning disabilities and incarceration rates.  “He saw how people with learning disabilities, when given the right attention and focus, could succeed. And he couldn’t understand why we as a country weren’t giving more to the people who have these challenges and need more assistance.” O’Neill and Alpert, who last saw Gandolfini at an HBO screening of the documentary "Which Way Is the Front Line From Here" about Tim Hetherington, the war reporter killed in Libya, are determined to finish the project Gandolfini started and believed in: “We’re trying to figure out how to complete his vision and how to complete a film without the man who inspired it and was driving it,” says O’Neill.  For Alpert, “the contributions he made to us all cannot stop the sadness and fill the void -- but must inspire us to make the world a better place, just like he did.” Right now, O’Neill explains, “we’re struggling first with the idea that he’s gone.”