Conservatives want you to think high taxes drove people away. The real truth is much worse for their radical agenda 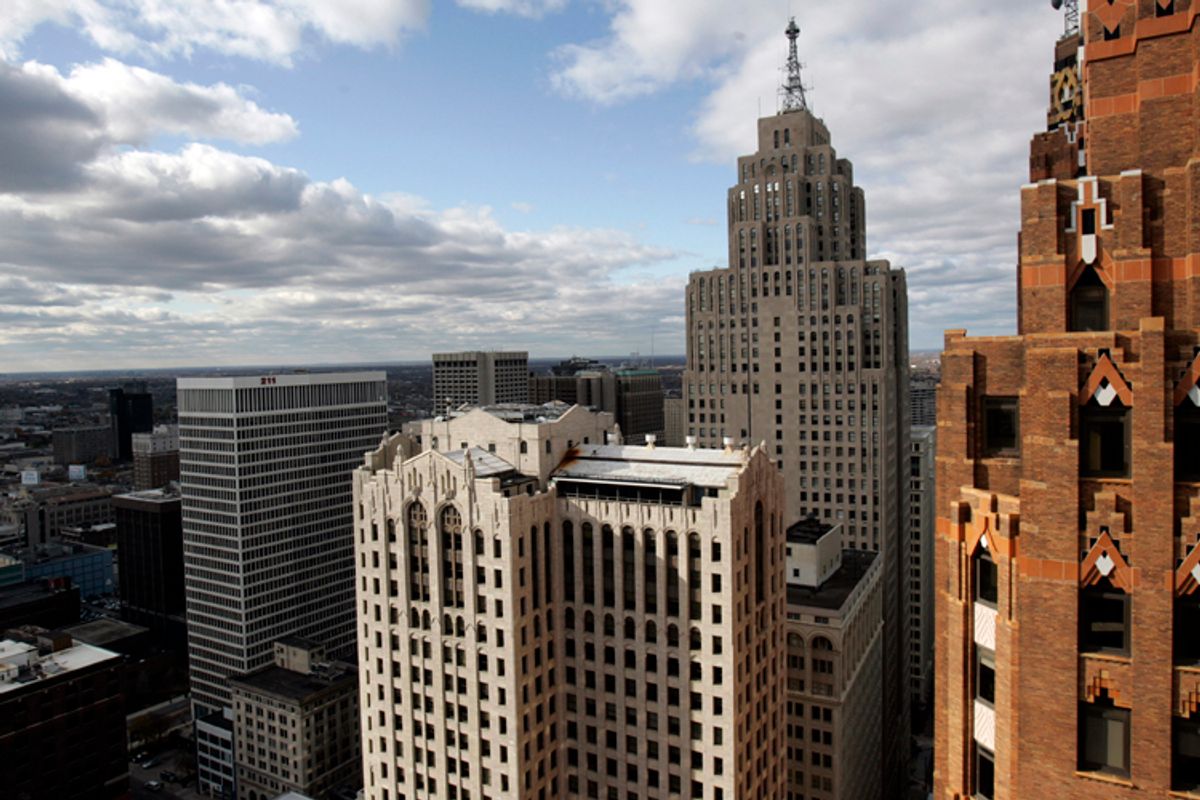 In the wake of Detroit's bankruptcy, you may be wondering: How could anyone be surprised that a city so tied to manufacturing faces crippling problems in an era that has seen such an intense public policy assault on domestic American manufacturing? You may also be wondering: How could Michigan officials possibly talk about cutting the average $19,000-a-year pension benefit for municipal workers while reaffirming their pledge of $283 million in taxpayer money to a professional hockey stadium?

These are fair questions -- and the answers to them can be found in the political mythology that distorts America's economic policymaking.

As mythology goes, the specific story being crafted about Detroit's bankruptcy is truly biblical -- more specifically, just like the fact-free mythology around the Greek financial collapse, it is copied right from the chapter in the conservative movement's bible about how to distort crises for maximum political effect.

In the conservative telling of this particular parable, Detroit faces a fiscal emergency because high taxes supposedly drove a mass exodus from the city, and the supposedly unbridled greed of unions forced city leaders to make fiscally irresponsible pension promises to municipal employees. Written out of the tale is any serious analysis of macroeconomic shifts, international economic policy failures, the geography of recent recessions and unsustainable corporate welfare spending.

This is classic right-wing dogma -- the kind that employs selective storytelling to use a tragic event as a means to radical ends. In this case, the ends are -- big shocker! -- three of the conservative movement's larger long-term economic priorities: 1) preservation of job-killing trade policies 2) immunity for corporations and 3) justification for budget policies that continue to profligately subsidize the rich.

Pretending Detroit and the NAFTA era are unrelated

The bait-and-switch on the first two objectives is fairly easy to see.

Detroit isn't just any old city -- it happens to be the biggest population center in the state hit the hardest by the right's corporate-written trade agenda. Indeed, according to the Economic Policy Institute, the state lost more jobs than any other from NAFTA (43,600, or 1 percent of its total job base) and lost another 79,500 jobs thanks to the China PNTR deal. And that's just two of many such trade pacts. Add to this the city's disproportionate reliance on American auto companies which made a series of horrific business decisions, and Detroit is a microcosmic cautionary tale about what happens when large corporations are allowed to write macro economic policy and dictate the economic future of an entire city.

If told, this cautionary tale would likely spark a discussion about revising current trade deals, regulations, public investment and industrial policy in general. That is, it would spark precisely the discussion that the conservative movement and the corporations that fund politicians don't want America to have. So the right works to make sure that discussion is short circuited by a narrative that focuses the Detroit story primarily on taxes and public pensions.

That is, of course, by design. The less Detroit prompts serious questions about trade policies and the auto industry, the less Detroit can be used as a rationale for changing those conservative, corporate-enriching policies and that industry. Likewise, the more taxes and retirement benefits can be blamed for Detroit's downfall, the more Detroit's tragedy can be used as a clarion call by the right to slash both.

Focusing on pensions to protect corporate welfare and tax cuts

That brings us to how this all plays into the right's push to enact ever more regressive tax cuts, protect endless corporate welfare and legislate new reductions in workers' guaranteed pensions.

These latter objectives may seem unrelated, but they all complement each other when presented in the most politically opportunistic way. It's a straightforward conservative formula: the right blames state and municipal budget problems exclusively on public employees' retirement benefits, often underfunding those public pensions for years. The money raided from those pension funds is then used to enact expensive tax cuts and corporate welfare programs. After years of robbing those pension funds to pay for such giveaways, a crisis inevitably hits, and workers' pension benefits are blamed -- and then slashed. Meanwhile, the massive tax cuts and corporate subsidies are preserved, because we are led to believe they had nothing to do with the crisis. Ultimately, the extra monies taken from retirees are then often plowed into even more tax cuts and more corporate subsidies.

We've seen this trick in states all over America lately. In Rhode Island, for instance, the state underfunded its public pensions for years, while giving away $356 million in a year in corporate subsidies (including an epically embarrassing $75 million to Curt Schilling). It then converted the pension system into a Wall Street boondoggle), all while preserving the subsidies.

Similarly, in Kentucky, the state raided its public pension funds to finance $1.4 billion a year in tax subsidies, and then when the crisis hit, lawmakers there slashed pension benefits -- not the corporate subsidies.

The list of states and cities following this path goes on -- but you get the point. In the conservative narrative about budgets in general, the focus is on the aggregate annual $333 million worth of state and local pension shortfalls -- and left out of the story is the fact that, according to the New York Times, "states, counties and cities are giving up more than $80 billion each year to companies" in the form of tax loopholes and subsidies."

The mythology around Detroit, then, is just another version of this propaganda.

So, for instance, from the administration of right-wing Gov. Rick Snyder, we are hearing a lot of carping about the $3.5 billion in pension obligations that are part of the city's overall $18 billion in debt. The focus leads casual onlookers to believe that -- even though they on average get a pension of just $19,000 a year -- municipal workers' supposed greed single-handedly bankrupted the city. What we aren't hearing about, though, is the city and state's long history of underfunding its pensions, and using the raided money to spend billions of dollars on corporate welfare.

For a good sense of some of the most expensive, absurd and utterly wasteful boondoggles in the Detroit area over the last few decades, read this piece from Crain's Detroit or see this 2011 article entitled "Detroit's Corporate Welfare Binge" by Detroit News columnist Bill Johnson. Alternately, recall this is in the heart of a region whose governments infamously spent $55 million of taxpayer money in 1975 (or a whopping $180 million in inflation-adjusted dollars) on one professional football stadium, then spent another $300 million on yet another football stadium, then sold off the original stadium for just $583,000. Or, just note that Detroit is the largest city in a state that, according to the New York Times, spends more per capita on corporate subsidies -- $672 or $6.6 billion a year -- than most other states.

By focusing the blame for Detroit's bankruptcy solely on workers' pensions, rather than having a more comprehensive discussion that includes both pension benefits and corporate giveaways, the right can engineer the political environment for the truly immoral reality mentioned at the beginning of this article -- the one highlighted this week by the Associated Press story headlined "Arena Likely Still On Track, Business As Usual For Sports Teams Despite Bankruptcy Filing." Yes, that's correct: at the same time government officials are talking about slashing the meager $19,000-a-year pensions of workers who don't get Social Security, those officials are promising that they will still go forward with a plan to spend a whopping $283 million of taxpayer money on a new stadium for the Red Wings.

Notably, a political environment that encourages these kind of immoral decisions is beneficial not merely to the corporate interests who directly benefit from such giveaways, but also to the Wall Street investors who still own the outstanding bonds that financed some of the subsidies. Taken together, then, a skewed discussion about budget shortfalls that excludes scrutiny of these subsidies and focuses only on worker pensions predictably ends up prioritizing the financial interests of corporate welfare recipients and Wall Street bondholders over municipal retirees.

It's the same dynamic on taxes. From the right, Detroit is being cited in the discussion about budget shortfalls as proof of the need for austerity. Yet, we aren't hearing much about why in the face of such shortfalls Snyder just devoted $1.7 billion to a new corporate tax cut that will likely exacerbate the state's deficit, nor are we hearing much about why state law compelled Detroit to forfeit other desperately needed tax revenues. Again, the goal here is to make sure that the conversation is one that only is about cutting retirement benefits -- not one that adds the prospect of progressive tax reform to the debate.

For his part, Kevyn Orr -- the unelected "emergency manager" imposed on Detroit by Snyder -- insists he will be evenhanded in distributing the pain of the city's bankruptcy. But with Wall Street bondholders intensifying their push to make sure all the pain is felt by public employees, and with the right's blame-the-workers narrative preventing any real discussion of corporate subsidies and tax policies, it's a good bet the $19,000-a-year pensioners are going to bear a disproportionate share of the sacrifice. After all, out of all of this situation's players -- corporations that want public subsidies, bondholders, rich folk who want more tax cuts, right-wing Synder administration officials and municipal workers -- the retirees earning benefits just above the poverty line have the least amount of political power.

So, as always, they probably won't be at the negotiating table. Instead, they'll almost certainly be where they usually are: on the menu, exactly where the conservative movement wants them.