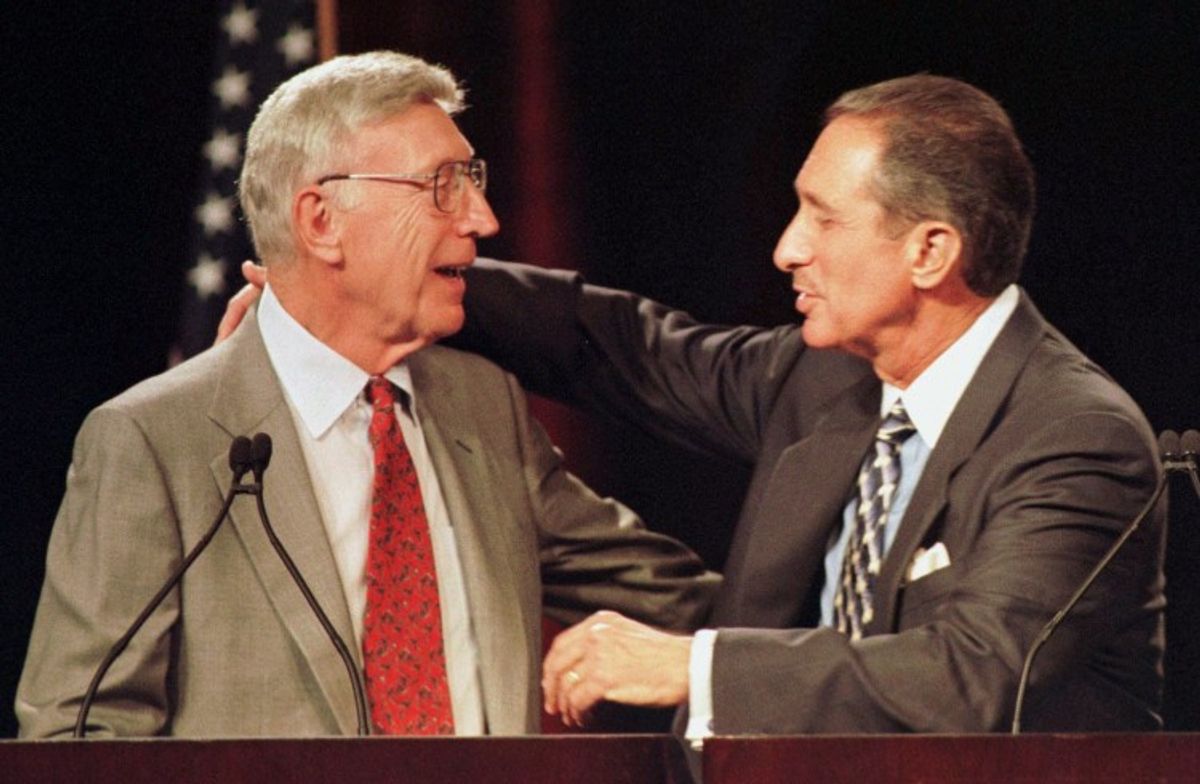 If George W. Bush's early — and adventurous — foreign policy was staffed by the American Enterprise Institute, the next generation of hawkish Republican undersecretaries of this or that might come from the Foundation for Defense of Democracies. The group has risen since its 2001 founding to become Washington's premiere hawkish think tank. But what has been less known is exactly who has been funding the outfit, and how much they’ve donated.

In the past, FDD president Clifford May, a former communications director at the Republican National Committee, said his organization garnered support from “all kinds of donors, who are interested in defending democratic societies around the world from their sworn enemies.” But, now, previously unpublished financial filings reveal that, by the end of the 2011 tax year, FDD was primarily funded by a handful of Republicans — the party's heavyweight donors, fundraisers and outspoken critics of the Obama White House’s foreign policy – including one donation nearing $11 million. The filing, an IRS "Schedule A" form, divulges the origins of more than $20 million in contributions to FDD between 2008 and 2011.

Home Depot founder Bernard Marcus topped the list of donors, contributing $10,745,000. A public critic of the Obama administration, blasting it as “amateurs in the White House” and “amateurs surrounded by amateurs” in a 2011 Wall Street Journal interview, Marcus maxed out his personal contributions to Mitt Romney’s presidential campaign. He also contributed $20,000 to Restore Our Future — a super PAC supporting Romney — and over $60,000 to the Republican National Committee in the lead-up to the November 2012 elections.

FDD’s second largest contributor is hedge fund billionaire Paul Singer, a major fundraiser for Romney’s presidential campaign and a significant campaign contributor in his own right. Singer, who gave $3.6 million to FDD, infused $1 million into Restore Our Future and over $1 million into the American Unity PAC, a Republican Party PAC that supports gay marriage.

While Singer splits with his party on gay marriage, he closely aligns with the Republican hard-line on Israel and against financial regulations. "At his June [2010 Republican] fund-raiser, Mr. Singer voiced frustration not only over financial policies in Washington," the New York Times reported, "but also on national security and foreign policy, particularly what he saw as the Obama administration’s inadequate support for Israel, according to a friend at the fund-raiser who spoke on the condition of anonymity because he was not comfortable speaking publicly about his guarded associate."

Las Vegas Sands CEO Sheldon Adelson — FDD's third largest donor — has been far less guarded about his foreign policy views than Singer or Marcus. Adelson, who contributed $1,510,059, is a close friend of Israeli Prime Minister Benjamin Netanyahu and a proponent of a hawkish U.S. foreign policy in the Middle East. (None of the FDD funders responded to repeated requests for comment.)

According to a 2008 New Yorker article by Connie Bruck, Adelson declined to lend his support to one Iranian anti-regime activist because, in the words of an intrelocutor, "he doesn’t want to attack Iran." Bruck reported that Adelson wanted to support another exiled Iranian dissident there named Amir Abbas Fakhravar. "I like Fakhravar because he says that, if we attack, the Iranian people will be ecstatic," Adelson reportedly said. When an interlocutor disputed the assessment, Adelson replied, "I really don’t care what happens to Iran. I am for Israel." (In 2006, Fakhravar worked out of an office “lent to him by the Foundation for the Defense of Democracies," according to a report in Mother Jones.)

A top FDD scholar and tireless advocate for bombing Iran, Reuel Marc Gerecht, has mirrored exactly Adelson's brand of disregard for what Iranians might think of an attack. "Too much has been made in the West of the Iranian reflex to rally round the flag after an Israeli (or American) preventive strike," he wrote in 2010.

Adelson, along with his wife, Miriam, emerged as the GOP’s biggest donors during the 2012 presidential campaign, contributing $150 million of his estimated $26.5 billion fortune, to a number of Republican campaigns. The majority of that money went to super PACs supporting Newt Gingrich and Mitt Romney. The former espoused views that the Palestinians were an "invented" people; something Adelson later explicitly, and unsurprisingly, supported. Romney flip-flopped between Netanyahu's "red line" of a nuclear capability and Obama's of weaponization, but firmly landed in the capability camp before all was said and done in the 2012 election.

Unlike Singer and Marcus, Adelson's profile also looms large over the national political scene. The casino magnate’s willingness to invest large sums of money in the race drew the wrath of the New York Times’ editorial board in June 2012, which derided the “perfect illustration of the squalid state of political money.” The Times suggested his support for Gingrich and, later, Romney hinged on his “disgust for a two-state solution to the Israeli-Palestinian conflict, supported by President Obama and most Israelis" — raising the incident in 2007 where Adelson threatened to withdraw his funding from the powerful American Israeli Public Affairs Committee because the group supported the Annapolis peace talks between Israel and the Palestinians. The Times accurately wrote that Adelson "considers a Palestinian state a stepping stone for the destruction of Israel and the Jewish people.”

“Why in the world might Adelson think that?" wrote FDD's May, after the Times editorial. "Well, there is the fact that Hamas, which rules Gaza, has repeatedly proclaimed there can be ‘no solution’ to the Palestinian-Israeli conflict ‘except through Jihad,’ a religious war through which ‘Islam will obliterate (Israel) just as it obliterated others before it.'" May acknowledged in his piece that Adelson “donated funds to the nonpartisan, nonprofit organization I head to support work on national security issues."

The revelations about the FDD's Republican mega-donors aren't the first sign of an alleged partisan bent. In 2008, a series of television ads targeting Democrats by a hastily thrown together FDD spinoff group caused most of the Democrats — including members of Congress — on the group's board to resign in protest. FDD's right-wing national security work, it seems, has long corresponded nicely with the politics of the nation's right-leaning political party.

May reiterated his statement in response to an inquiry for this article. "FDD has both Republicans and Democrats among its donors and we are proud of our work with policymakers on both sides of the aisle," he said by email.