Why I stopped wearing hijab 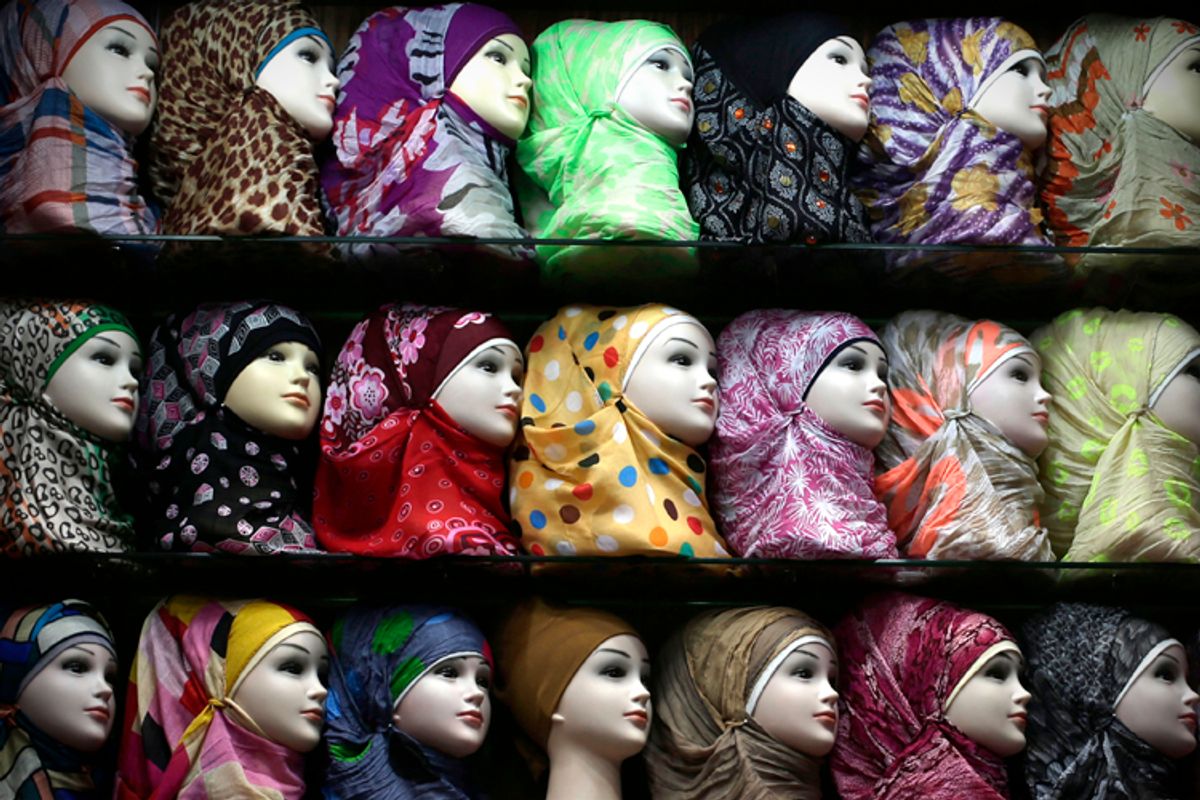 I somehow thought it would be a great idea to start wearing hijab during one of North Carolina’s sweltering summers. It was shortly before my fifteenth birthday, and in retrospect I’d blame the timing on a desire to use it as a bargaining chip to maximize my back-to-school shopping gains.

I was also itching to reinvent myself, after a disastrous high school debut the previous year. After eight years in my tiny private Islamic school, I walked into my overpopulated public high school expecting the world of "Dawson’s Creek" and "Popular" -- free of the fire, brimstone and rules that I was so tired of. In the hallways of my high school, I was confronted with a crisis I had never expected: I found myself needing to assert my identity as an exception to the world of bacon and boyfriends, as my pale skin and straight mousy hair did not seem to reveal my Palestinian heritage or the fact that I was the product of a tight-knit Muslim community.

Wearing hijab felt like the most natural next step -- apart from the comfortable label, most of my friends had already begun wearing hijab, and the adults around me encouraged it. Hijab, at the time, signified belonging. My choice was celebrated with a party, a new wardrobe, and perhaps a sigh of relief and pride from my parents -- who, like many Muslim-American parents, saw hijab not only as a visual marker of faith, but also as the preservation of cultural identity. It was an easy decision to make, and I was banking on piety to eventually kick in.

Only a few months after beginning to wrestle with my new decision, the Twin Towers fell, and soon enough, my religion was no longer just a part of an internal struggle, it was now the subject of a public debate. Gone was the invisibility of my freshman year -- as my new hijabs marked me as a source of answers about what many saw as the ideology responsible for that national tragedy. I was thrust into a position where I was attempting to prove that I could, in fact, embody both Islamic and American values all at once -- even though my very existence was a testament to the fact that my religion, as I saw it, did not clash with stars and stripes.

The bearded zealots filling our screens had their oppressed, silent counterparts: the ones that I felt the most pressure to distance myself from. During my eight years in hijab, I felt pressure to prove that I was not oppressed -- whether that was in my personality, relationships or my answers to even the most benign questions about Islam. I saw every question as an opportunity to break the stereotype that I was desperate to distance myself from: that I was a downtrodden woman looking for a little bit of liberation. I adopted a narrative familiar to many Muslim women in hijab: I claimed that hijab placed me in a utopian safe space from not only the male gaze, but also the judgmental narrative around women’s bodies.

But I was wrong.

While I was never subjected to wolf whistles, hijab came with its own brand of judgment. I felt the pressure to embody a certain form of purity and faith, as I was viewed as an extension of the public image of Islam. Suddenly, we were not only grappling with our own religious identities -- we were also responsible for accurately representing a brand of Islam deemed to be the right one by the community. Wearing hijab in America suddenly meant that you weren’t just representing your Islam -- you were also representing everyone else’s.

Still, I was determined to prove that hijab was never a hindrance, but merely another part of my identity. Whenever confronted with tales of women oppressed by Muslim men in far off lands, I waved them off, claiming that cultural norms, rather than Islamic teachings, were the real culprit. I blindly asserted that if practiced correctly, hijab is ultimately empowering and liberating -- using my own experiences as an example. I did not consider what factors actually go into creating inequalities -- nor did I consider the fact that just because I shared a faith with someone across the globe, our lives might not be the same. Religion, while it might have its roots in texts or teachings, manifests itself in different ways across communities, countries: making it almost impossible to make broad-brush strokes about its followers across the board.

Despite being one of the countless poster girls for butt-kicking, empowered hijabis, I realized that I could not reconcile the practice of hijab with my own beliefs. Ultimately, I feel like hijab helps reinforce the idea that spirituality is somehow proportional to how covered someone's body is. But those feelings, for a very long time, were stifled by guilt. After spending a long time battling hatred against Islam, there was something frightening about giving up the marker of that identity. But a few years on, and I've found that hijab or not, I'm just as passionate about fighting Islamophobia as I was before.

Taking off hijab isn’t easy. There’s gossip, disapproval, and of course the disappointment that goes along with no longer proving -- at least visually -- that you have managed to preserve multiple identities. The act of taking off a hijab did not somehow “liberate” me either: making hard decisions for myself, and having the space to figure out who I am was what made me finally feel at home in my own skin.

My years covering were tough, formative, the kind of trials and tribulations that make for rewarding college applications. But ultimately they were about something that gets left out of hijab-related conversations: identity.