Marches won't cut it anymore: Why this week's feels like a funeral 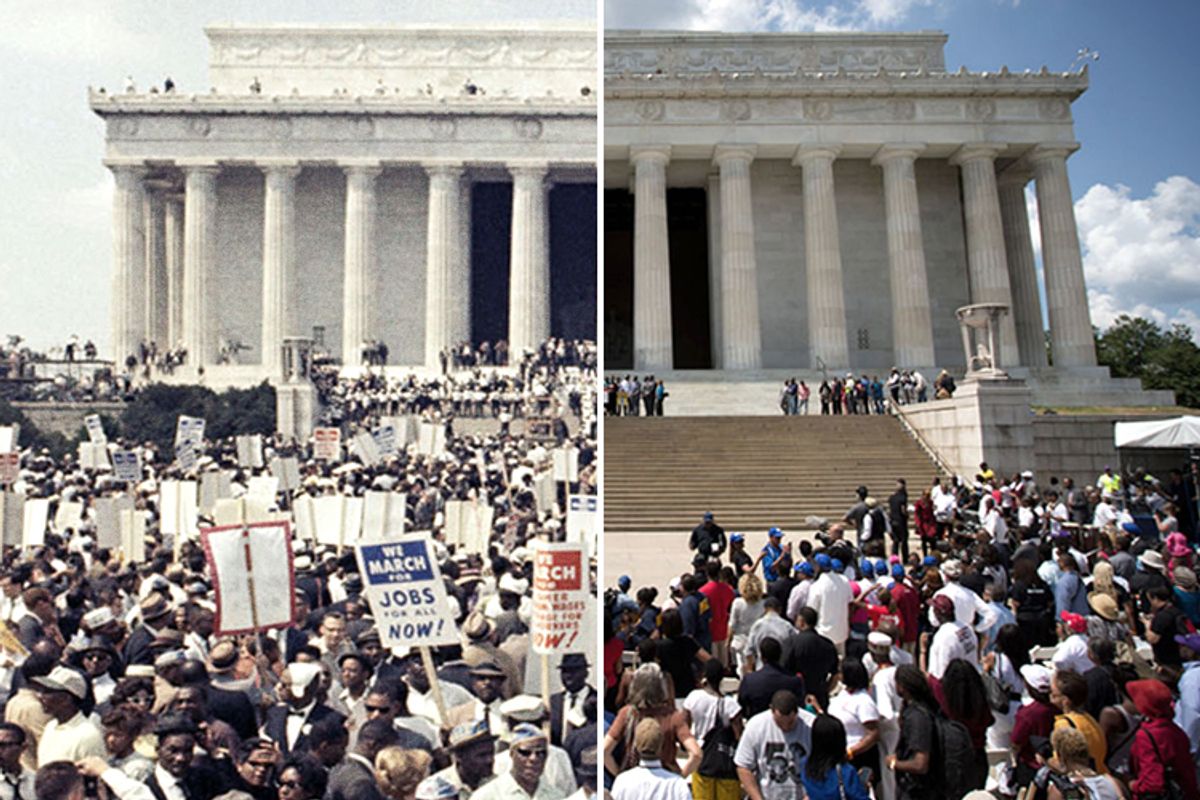 I must say, the 50th anniversary of the March on Washington for Jobs, Justice, and Freedom left me feeling mostly uninspired. Though there was some attempt in the early portion of the program to include younger speakers, the main portion of the event featured activists, politicians and figureheads all over the age of 40. The representation of women was yet again minimal as was true in the first march. And while the Rev. Sharpton gave a rousing sermon, it felt more like a eulogy for a bygone era, than a call to action.

Saturday’s march attempted to recapture the spirit and legacy of black politics 50 years ago, to “get that old thing back.” Certainly, many of the issues remain similar. As Dave Zirin noted in the Nation, the D.C. police confiscated the signs of marchers that had the phrase “The New Jim Crow” stamped on them. Al Sharpton railed against the kind of right-wing chicanery that has gutted the Voting Rights Act.

Signs with pictures of Trayvon Martin’s face were plastered throughout the crowd, and his mother addressed the audience. The fact that the issues are still very similar 50 years later – black boys shot down with impunity, rampant black joblessness, the vote unprotected, and women’s issues largely invisible – means that the long black freedom struggle continues. But the old ways of struggling are summarily dead.

There are three major characteristics that distinguished this march from its predecessor.

First, MOW ’63 captured the hearts and minds of the nation with such power because it capitalized on what was considered new media back then: personal televisions. People were struck by the image of seeing gratuitous kinds of violence being done to peaceful black people sprayed by fire hoses and attacked by dogs; Americans were awed by the sheer numbers of people who showed up on the National Mall.

MOW ’63 was a media spectacle as much as it was anything else. But visual culture has greatly shifted in the 50 years since then. People under 35 watch far less television than those over 35 do. The limited coverage of the event, mostly on cable news stations, attests to the utter lack of interest of broad swaths of the American public and most assuredly to the declining dominance of television. The last time a black march arrested America’s attention in that way was the Million Man March in 1995. Two decades later, it is safe to say that national pilgrimages to Washington hold far more symbolic than political capital.

Second, it took 20 years of organizing for the first March on Washington to occur. A. Philip Randolph began the March on Washington Movement in 1941 to pressure Franklin Roosevelt into establishing the Fair Employment Practices Commission, in order to stop discrimination in federal employment. When Roosevelt conceded and established the FEPC, Randolph took the march off the table. When black people did finally convene in Washington in ’63, they created the political climate for the passage of the 1964 Civil Rights Bill. The original idea for the march, then, served not as a commemorative event, but rather as a form of political action that achieved actual political outcomes for black people. Moreover, it was the culmination of a long-range vision that had driven black politics since the end of Reconstruction. Our collective attention span –- on the left anyway -- seems far too short to craft this kind of long game now.

Third, Malcolm X’s agitation and the increased visibility of the radical black left in the mid- to late 1960s made the liberal alternatives proposed by King and the civil rights establishment more palatable and attractive to the larger American body politic. These days, liberal politics have become the scary “radical” alternative in a country that has swung frighteningly far to the right.

Though we look at MOW ’63 as the racial zenith of the 20th century, King’s politics became more radical in the aftermath because young activists challenged him to take a broader, more structural view. Black liberal advocacy in this country for more jobs, less poverty, more education, less prisons, more life chances and less gun deaths doesn’t have a fighting chance without a visible radical alternative.

Though Cornel West has tried to uphold the banner of the black left through his unrelenting critiques of President Obama, we need young people with fresh, creative vision to reinvigorate and reimagine what the radical Black left can be in this moment. I hope then, that this March renews our vigor for Black left politics.

This means that whatever President Obama might say in his speech commemorating the lynching of Emmitt Till on Wednesday, we should not let such acts distract us from the broader project of resurrecting a viable model of black politics for the 21stcentury. Without strong left advocacy, liberal politics is dishonest, lacking in ambition, and far too willing to give up ground. I, too, have been enamored with Florida’s Dream Defenders, mostly because it’s great to see a decline in young people’s racial apathy. But advocating for state-based solutions to persisting racial inequality is an inchoate strategy for lasting change. And marches are no match for the politics of this “new racial nadir” in which we find ourselves.

The Rev. Sharpton himself proclaimed, “We need to give our young people new dreams.” Despite his best efforts to lay out a set of concrete, and frankly, unambitious goals  – voting rights, job creation and gun control – to guide black advocacy in the near future, the march itself and even his speech largely reminded us of where we had been, using the past as a marker to remind us of who we are.

It said nothing about what our ultimate destination might be, and little about where we should go from here. The idea that a 25-year-old voter could show up to a North Carolina voting booth with a picture of Cheney, Goodman or Schwerner, “because that’s who we are,” is romantic, but impractical. Most 25-year-olds, especially those learning in public schools with resources gutted by austerity measures, likely have no idea who those three young men even were.

Tethered as it was to narratives of the past, the march seemed more like a funeral than a commencement. Black funerals manage to be many things all at once: a family reunion, replete with nostalgic storytelling, capped off by a lamenting of days gone by, a celebration of the life that has been lived, and a reminder and encouragement for the rest of us to carry on the legacy. And any black preacher worth his or her salt knows how to deliver a good eulogy.

Rev. Sharpton presided well over the home-going service for this model of black politics as we’ve known them, giving a rousing eulogy that did not disappoint. But a eulogy it was.