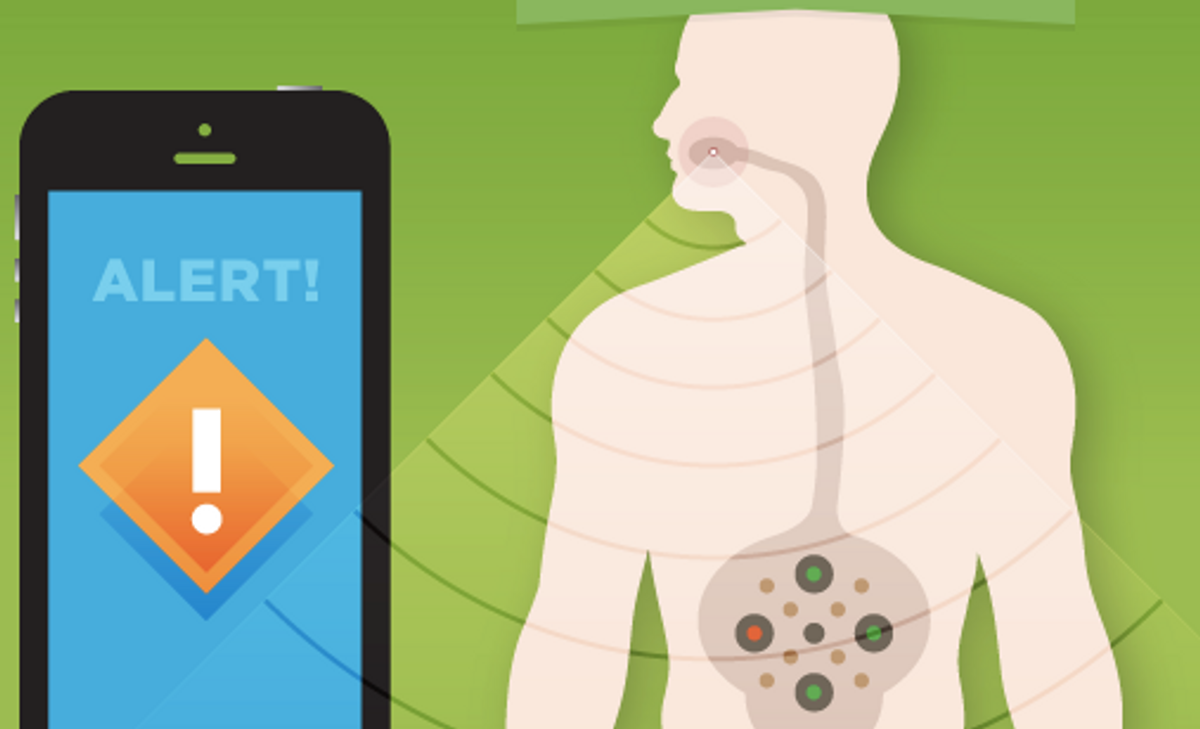 If you need help counting calories or keeping track of what you eat, here’s some mobile news you can really chew on. Scientists from National Taiwan University have created a Wi-Fi-enabled sensor that can be embedded in the mouth to collect data on eating habits, dental health and even who’s sneaking cigarettes.

The sensor works by using accelerometers, which can track how the mouth is being used based on the movement of the teeth. The prototype was tested on eight people, and the sensor accurately identified and distinguished each person’s coughing, chewing and drinking behavior 94% of the time.

One of the researchers behind this project, National Taiwan University computer science professor Hao-hua Chu, told Co.Exist he was initially inspired to apply computer science to oral hygiene because his daughter saw a dentist regularly for cavities. His first attempt at improving his offspring’s dental habits was a camera-based game that encourages kids to properly brush their teeth, but Chu believes the sensor could seriously aid in the fight against plaque.

Chu and his team are also looking at ways the sensor can be applied in daily life. One incredible use is monitoring food intake to help people maintain a healthy diet. “People are basically eating too much these days,” Chu said. “This is an important issue in the U.S. and in Taiwan.” The sensor could put an end to over indulgence by working with diet apps to make sure users are sticking with their eating regime. Sure, you can still snack, but don’t be surprised if the chip sends a scathing notification to your smartphone. And don’t even think about having a cigarette, as Chu is also exploring ways his sensor can detect the use of tobacco products.

At present Chu’s sensor runs on an external power source, but the Taiwanese researchers are currently working on an internal power solution. They also plan to add Bluetooth support, which would allow doctors to monitor and download data from the sensor to their mobile devices. Data extraction currently occurs via Wi-Fi.

In an interview with ABC News, Michael McAlpine, an assistant professor of mechanical and aerospace engineering at Princeton University, called the Taiwanese team’s research “exciting, but more as a proof of concept than as a specific product.”

“If you look at smart watches or Google Glass, these are attempts at taking electronics and finding ways to merge it with the body,” McAlpine told ABC News. “This is where the future is going.”

McAlpine would know about that future dental technology. He is also working on ways to put electronics on teeth. Instead of silicon chips, his team has designed a graphene circuit that’s applied to a tooth like a tiny tattoo. Unlike Chu’s anti-cavity chip, McApline and team are using their sensor to help boost our immune systems by monitoring bacterial levels in the mouth.

For now, it seems like there’s still plenty of work to be done for researchers like Chu and McAlpine, who are trying to find the best way to combine man and modern technology. “People are going through a list of devices one by one,” McAlpine said. “They’re trying to figure out how to get [these devices] to interface directly with the body.”

With over 200 bones in the human body, the possibilities are endless.