"Smile, baby": The words no woman wants to hear 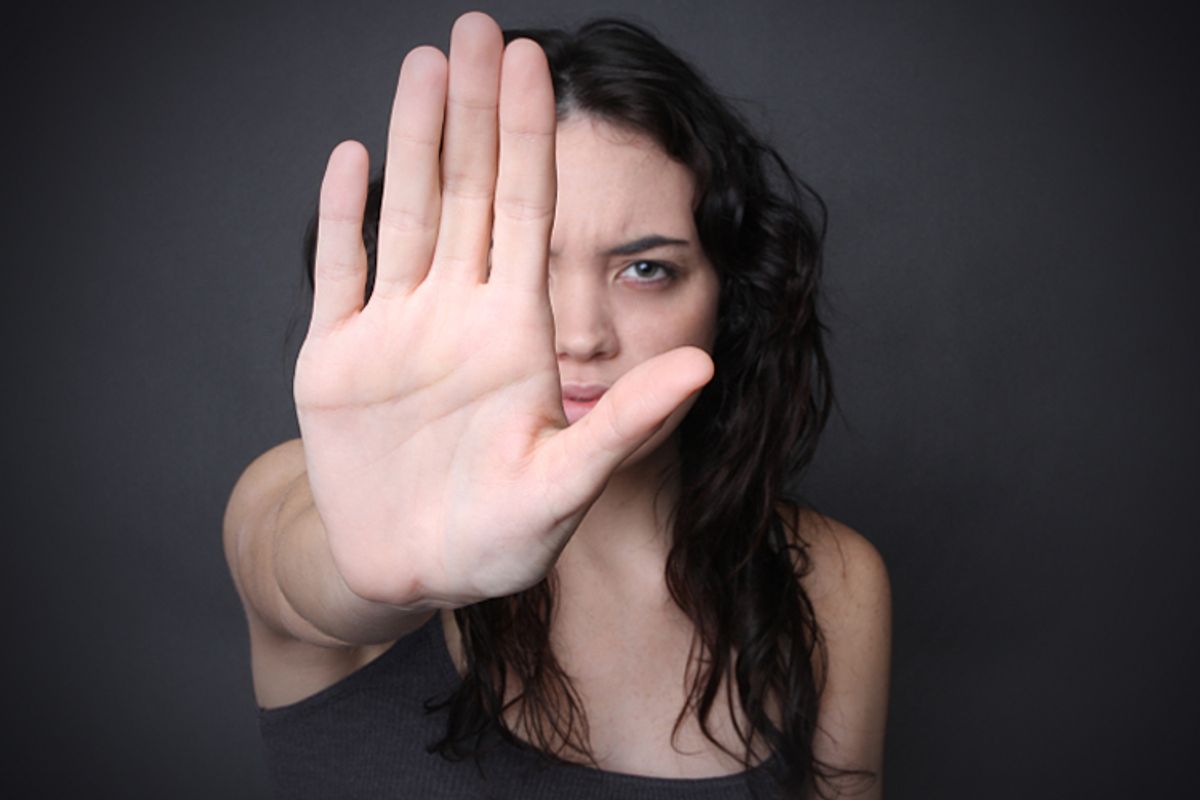 Yesterday, I missed a train and I was frustrated, hot and tired. A man standing in the station decided it was a good time to pass his hand along my arm as I ran by and whisper, “You’d be even prettier if you smiled.”  Here’s the thing about “Smile, baby,” the more commonly uttered variant of the same sentiment: No woman wants to hear it.  And every woman wonders, no matter how briefly, about what could happen if she doesn’t smile.  I was in a crowded place and perfectly safe, but that is actually, in the end, irrelevant.  I have, in the past, been followed by men like him.

Without exception, this phrase means a man is entirely comfortable telling a woman, probably one he doesn’t even know, what he wants her to do with her body to please him.  This suggests a lack of respect for other people’s bodily integrity and autonomy.  The phrase, and others more sexually explicit, are verbal expressions of male entitlement.  The touching would reinforce that suggestion. Two “inconsequential” little words.  A small thing, until you consider street harassment as the normalization of male dominance. Harassing men are arbiters of public space and their everyday regulation of women in those spaces results in what, in 1993, Cynthia Grant Bowman called the “informal ghettoization of women.”   Then it’s not so small.

Street harassment is very gendered, linked to violence and overwhelmingly heteronormative.  Women are generally not harassing men, grabbing their bodies or otherwise threatening them in public.  I have been called every conceivable gendered slur under the sun for not complying with the sexualized demands of total strangers in public places.  I’m taking about boys and men muttering obscenities, making pornographic suggestions,  touching people they don’t know in intimate ways, lurking on stoops, staring from benches, and following girls in cars.  It puts a damper on a sunny day when you go for a walk and someone yells that you’re a “fucking slut” because you don’t respond to their request that you stop and talk to them.

According to Holly Kearl, the author of "Always On Guard: Women and Street Harassment" and founder of Stop Street Harassment, anywhere between 80 percent and 98 percent of women surveyed report persistent, aggressive street harassment.  A spectrum of street harassment is a universal constant for women and it subtly imparts the understanding that girls and women should not feel too safe or confident in public.  It starts when girls are as young as 9 and never ends. Even covering up entirely has no effect.  The younger the girl, the more negative the possible effects, which are well documented and can include depression, shame, headaches, anxiety, withdrawal, fear, self-objectification and more.  After the thin veneer of flattery wears off, what is left is a sometimes-daily awareness of vulnerability, sexual objectification, shame at being targeted, and shame at not fighting back. Some women do confront harassers, but the idea of fighting back, or saying “Stop!” has class and race implications. As Jamie Nesbitt Golden noted earlier yesterday, “Just telling men ‘no’ doesn’t necessarily work for everyone – and can even be dangerous.”

Going to school, commuting to work, or meeting friends should not have to involve an assessment of whether or not you are putting yourself in a “dangerous situation.”  In a country where one in five women will be raped (higher in some groups, for example if a girl or woman is Native American,  in college, in the military or between the ages of 16 and 24), we don’t have the luxury of pretending street harassment is “harmless” or exists in a vacuum.  Regardless of where the harassment takes place, or its virulence, street harassment reflects widespread acceptance of the idea that women’s bodies are a public resource and that men are entitled to them. It derives its power from the threat of violence that simmers under the surface of every interaction, even the “flattering” ones.

In San Francisco last year, a man stabbed a woman in the face and arm after she didn’t respond positively to his sexually harassing her on the street.  In Bradenton, Fla., a man shot a high school senior to death after she and her friends refused to perform oral sex at his request. In Chicago, a scared 15-year-old was hit by a car and died after she tried escaping from harassers on a bus.  Just Google, “Man grabs woman.”  The problem with street harassment isn’t the demand that a woman smile or perform fellatio, the problem is the answer to the question, “What if a woman doesn’t want to?”

Of the more than 40,000 submissions sent to the site Everyday Sexism, a significant percentage involve common street harassment. Typical submissions look like this: “A guy came up behind me and put his shirt over my head while simultaneously grabbing my breasts, hard,” “Harassed by a group of twenty year olds…shouting 'Nice rack!'" (to 13-year-old), and “A hand grabbed me from behind and pushed between my legs.”  Girls' and women’s responses range from being intimidated, embarrassed and humiliated to being enraged and fighting back. Most men express amazement that we live with this reality.

We are, however, at the beginning of a global anti-street harassment groundswell. Organizations like Hollaback (which encourages people to share their stories and put harassers on neighborhood maps), Stop Street Harassment and the Safe Cities Global Initiative conduct and compile research and work to raise public awareness, educate children and adults and give people the tools to deal with and confront widespread harassment.

Among the most compelling testaments to the pervasiveness and harms of harassment, however, come from activists and artists.  Last year, a video of street harassment in Belgium catalyzed public awareness across Europe when the filmmaker captured “regular” guys saying things like “sexy butt” and “naughty slut” to women they followed and talked to.  The documentary "Black Women Walking" paints a clear portrait of racialized harassment in the United States.  Comedian Kamau Bell’s recorded street conversations with women and harassers was both humorous and enlightening and revealed a lot about what men think when they engage in this behavior.  Perhaps most provocative, however, is the work of Brooklyn-based artist Tatyana Fazlalizadeh.  Early this year she began pasting graphite portraits of women accompanied by texts reading, for example, "My Name Is Not Baby, Shorty, Sexy, Sweetie, Honey, Pretty, Boo, Sweetheart, Ma,” and "Women Are Not Outside for Your Entertainment." She just launched a Kickstarter to expand her public art project, named “Stop Telling Women to Smile,” to more cities.

Most men are not abusive harassers who yell threatening vulgarities at girls and women, and what a woman wears, her age and her comportment have very little to do with harassment.  It’s important that these men challenge those who harass.  Men who are abusive have license, until recently largely uncontested, to act with entitlement in our culture.  It's really a good time for this to change.