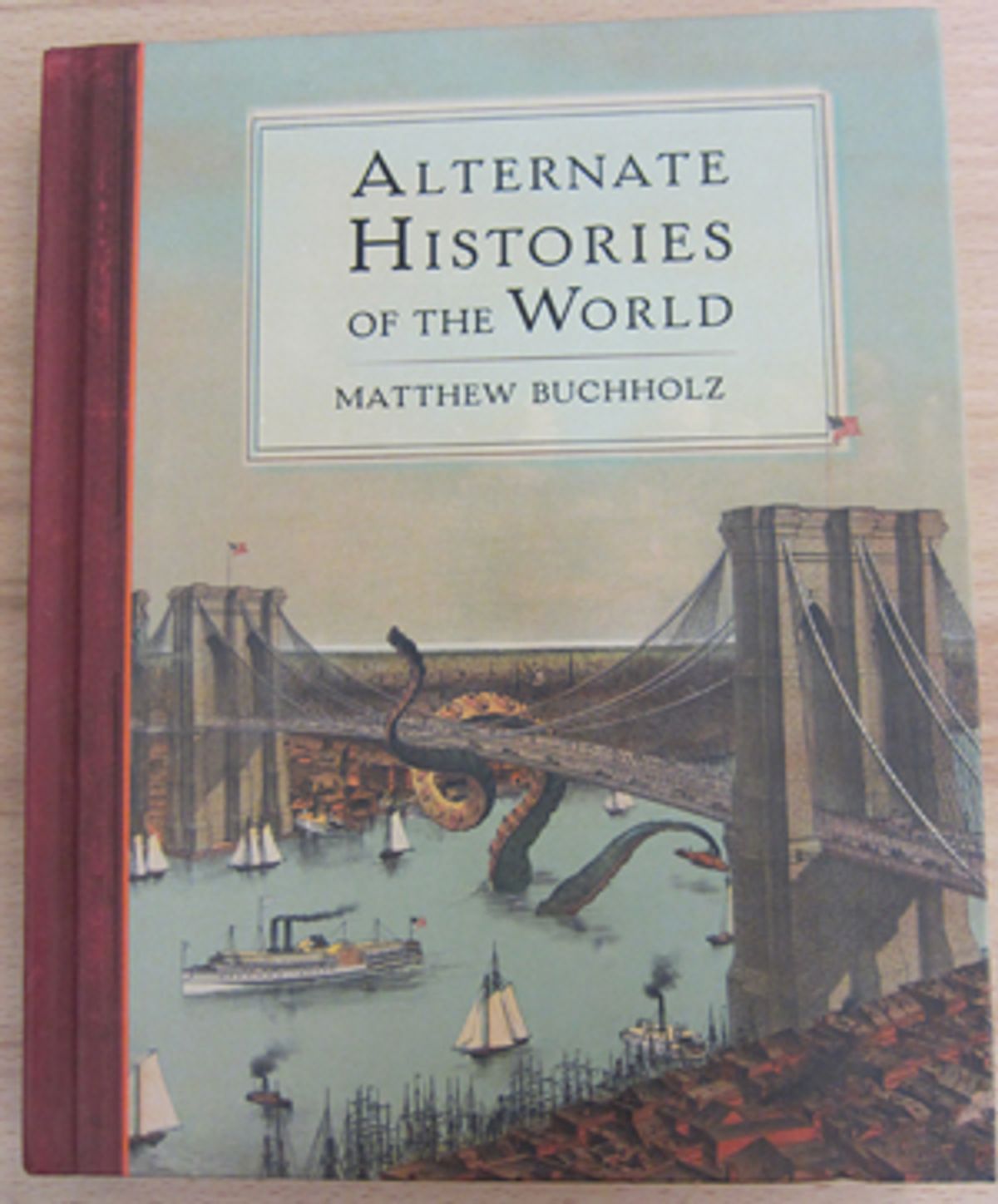 A little known fact: a great obstacle to the building of the Brooklyn Bridge was Rosie the East River Monster, whose tentacle can be seen grasping at the completed structure in an 1883 illustration. Well, not really, but such fictitious warpings of history are the specialty of Matthew Buchholz whose new book Alternate Histories of the World posits what havoc zombies, aliens, dinosaurs, river monsters, and other sci-fi creatures would have wrought if unleashed on history.

Buchholz has been making these “alternate histories” online since 2010, selling prints of such fantasies as a giant Andrew Carnegie wreaking havoc on the Pittsburgh he helped build, and WPA-style posters for “Department of Monsters, National Park Service” that mix in nightmarish monsters with the bucolic scenes. In fact, no area of history has been safe from Buchholz’s invasions, from the Rosetta Stone to Albert Einstein, which he states merge his “love of history and bad sci-fi movies” in his art.

As a book, it’s best flipped through at random. There are recurring characters like Vilnar, a rather ominous creature that roams history with a space helmet on what appears to be a hulking bear-like being; and Magnificent Medwin the Mechanical Man, a robotic American statesman and patriot who crosses the Delaware with George Washington and was in the Revolution an important ally, especially as “someone who could crush them all in his mighty metal hands.” However, it’s mostly jumbled distortion with no long narrative, although often the alterations of history are based on some scrap of truth, such as the height of Napoleon augmented at the Battle of Austerlitz, playing off the vertical challenges of the general (who was actually of average height). Here he has taken a growth serum to turn into a towering giant, where “his height gave him not only a commanding tactical view of the enemy but also the ability to decimate entire regiments with one swipe of his sword.”

The images are all decidedly silly, and the altered historic photographs can appear like tabloid mash ups, but Buchholz’s real skill is with matching the style of an old illustration he found from history or a flea market. The zombies seem to be Buccholz’s natural territory for this, such as with the believable map of “Living Dead Outbreaks & Attacks” of Pittsburgh in 1876. However, the zombies have their best moment in the “Trades in the Middle Ages” illustration that shows “a zombye” with one arm ripped off about to get a hammer to its head alongside the professions of a box-maker and taylor. The text explains that “as late as 1330, Zombyes were considered to be people of respectable and enviable status, as their demands for food and shelter were minimal. It was this misguided embrace of the Living Dead that led to the Zombye epidemic of the 1350s, or as commonly known, the Black Death.” An illustration of the plague doctor costume with its long beak is included, only it’s captioned that the outfit is “complete with scythe and skull-lancer.” Yet the images are best when they stand on their own, and the book could almost have done without the stories, as Buchholz obviously has the most fun in playing with the accepted visuals of history and making all of the story of humanity the plaything of aliens from beyond the stars or some tentacled monster that just won’t leave the infrastructure alone.

Here’s a preview of some pages from Alternate Histories of the World: Alternate Histories of the World by Matthew Buchholz is out October 1 from Perigree Press.