Why was this major outsider art survey 91.3% male? 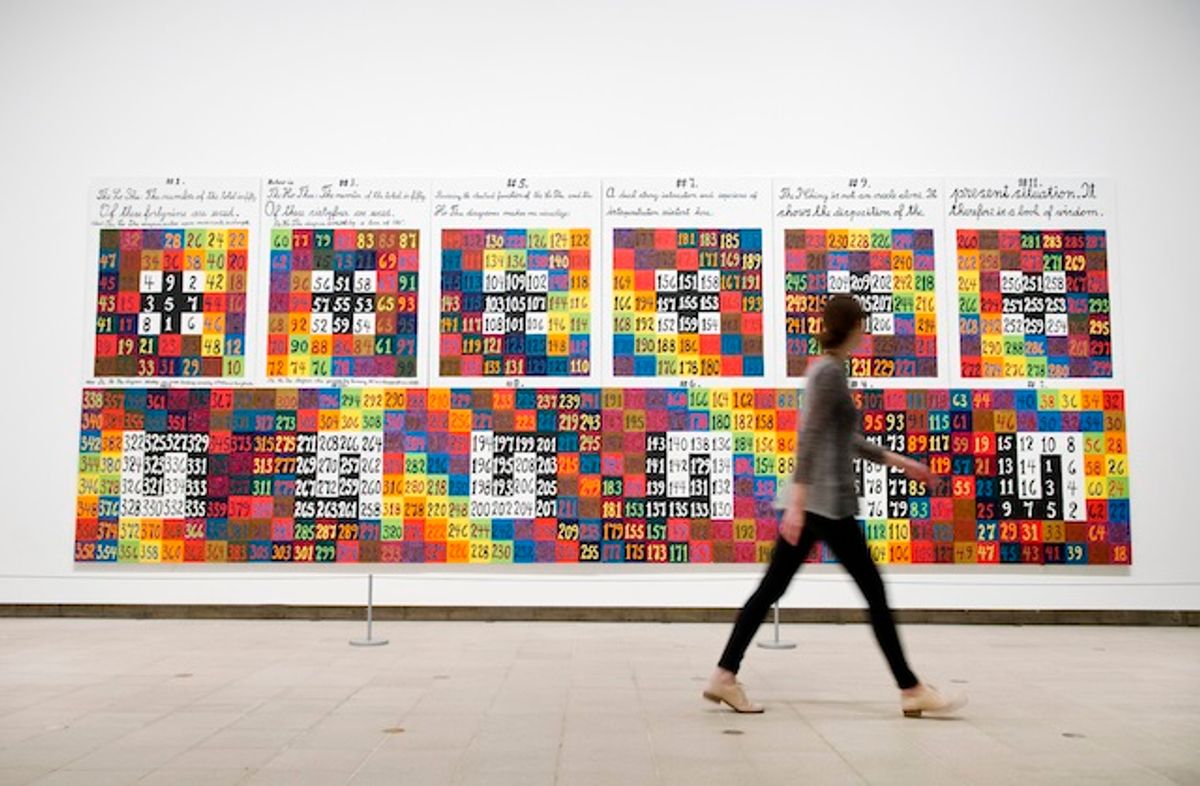 LONDON — A major survey of outsider art, Hayward Gallery’s Alternative Guide to the Universe closed two weeks ago, on August 26. It was a show featuring many of outsider art’s most prolific practitioners of the last several decades, all under the aegis of providing institutional space for “alternative” modes of knowledge. Yet of the Alternative Guide‘s 23 artists, only two were female — making the exhibition minimally alternative, if not regressive. When a museum exhibition is 91.3% male people tend to notice (the two exceptions were Lee Godie and Guo Fengyi), and the Hayward was no exception here. In their review, the Guardian noted the fact and quoted a bizarre comment by way a snippet of explanation from the museum’s curator, Ralph Rugoff, that “maybe women are more down to earth.”

Reached by Hyperallergic in the days following the conclusion of the show, Ralph Rugoff provided some additional explanation for the gender imbalance in his show, which included a condemnation of the Guardian’s quote. “That was an out of context quote in the Guardian. It was asked as a question, not asserted as a statement. I researched many artists for AGU over an 18 month period and in the process encountered few women artists who fit within the exhibition’s brief — e.g. artists who were proposing alternative versions of existing cultural systems of knowledge,” he told Hyperallergic in an emailed response to our queries received yesterday. Rugoff, an American, had earlier this summer made something of a splash when he told the Telegraph that the Tate Modern was like a “shopping center,” its experience a stultifying lurch ”from one more or less identical neutral room to another.” This sort of grandstanding is to be expected from a rival curator, but it is perhaps better taken as a generalized condemnation of the limitations of large, institutional museums. Sure, the Hayward might be playing second fiddle to the Tate Modern on London’s South Bank, but its survey of outsider artists was animated by no less a conservative outlook on the process by which outsider artists have been lionized in recent decades. And the timing of the show coincided with what many have seen as the increasingly troubling fetish for outsider art that seems to have developed in earnest within rarefied curatorial circles. The Village Voice‘s Christian Viveros-Faune crystallized the sentiment in his July review of the Llyn Foulkes retrospective at the New Museum, writing that “Outsider art is the new blue-chip art.”

Unlike the context for the Guerilla Girls’ historic condemnations of overwhelmingly male curatorial skews at the likes of the Metropolitan Museum and the Museum of Modern Art, the premise of outsider art hinges upon an ostensibly ungendered status of marginalization. Though it’s impossible to fully diagnose here the condition that has guaranteed institutional and commercial recognition for an almost exclusively male cadre of “outsiders,” the modern conception of productive madness is one overwhelmingly dominated by the narrative of the male madman whose insanity is not rudely clinical but intellectual, essential, and artistically or aesthetically liberated.

One could also reasonably suggest that the suppression of gender from modern discourses on the nature of insanity is traceable in the 20th century to Michel Foucault’s Madness and Civilization, which negates the dimension of gender entirely in its historiographic project of critiquing the marginalization of the insane. Which isn’t to say that contemporary scholarship has ignored the question entirely (see, for example, Carol Thomas Neely’s 2004 Distracted Subjects: Madness and Gender in Shakespeare and Early Modern Culture), but these gender-oriented reactions to Foucault’s thought and its heirs seems completely absent from curatorial perspectives on outsider art, and the Hayward’s Alternative Guide provided as good a showcase as any of this omission. But in his responses to our line of questioning, Rugoff skirted the structural exclusion of women from the “canon” of outsider art, instead suggesting that the skew was merely intrinsic to the premise of his exhibition. “Obviously there are many great women artists who are categorized as outsiders. So I don’t think the genre is structurally geared to men. I have to conclude that the low percentage of women in AGU [Alternative Guide to the Universe] somehow reflects the exhibition’s brief. Yet I also don’t think the exhibition is a large sampling to suggest that male artists are (for whatever reasons) more inclined to re-imagine technology, architecture, physics, and systems of measuring time,” he writes.

Taken with the allegedly decontextualized “down to earth” comment made to the Guardian, it’s a familiar refrain that echoes similar sentiments on the subject of the exclusion of women in fields as diverse as science, mathematics, and the high technology industry. One recognizes the reflexive shrug that accompanies the words of such men as Larry Summers, who in 2005, as president of Harvard University, drew a firestorm of criticism when he suggested that women are inherently less able to succeed in science and mathematics. His defense, at this point a trope of such discussions, was that he was merely raising the possibility of an inferiority, not quite stating a conclusion. He also eventually apologized. Such retrograde tactics are predictable in the annals of the establishment, but if the purpose of a contemporary arts center such as the Hayward is, as Rugoff himself told the Telegraph, to offer a rejoinder to the calcified thought espoused by the artistic establishment, it seems unusual to at the very least not make the exclusion of female outsider artists a focal point of the exhibition itself. “Yet if there is more outstanding work by women outsiders that does this, unfortunately I couldn’t find it,” he told us.

How should the the dialogue on gender equality in outsider art shows be constructively advanced by curators, critics, and artists? Probably not unlike how the broader conversation about gender equality in art institutions has been debated by innumerable and highly visible feminist actions since the 1970s. “[A]s a curator,” Rugoff writes, “I would say that the issue could be addressed by openly acknowledging it whenever and however it comes up. In the case of AGU, we could have had a wall text addressing the fact that there were only two women artists in the show and that this did not reflect a lack of effort to find more suitable women artists. Discussion could follow as to whether this implied that the concept of the show was skewed towards concerns that are more generally explored by male artists. In which case, a curator or institution should also address how this situation is going to be dealt with in future to balance out the gender representation.”