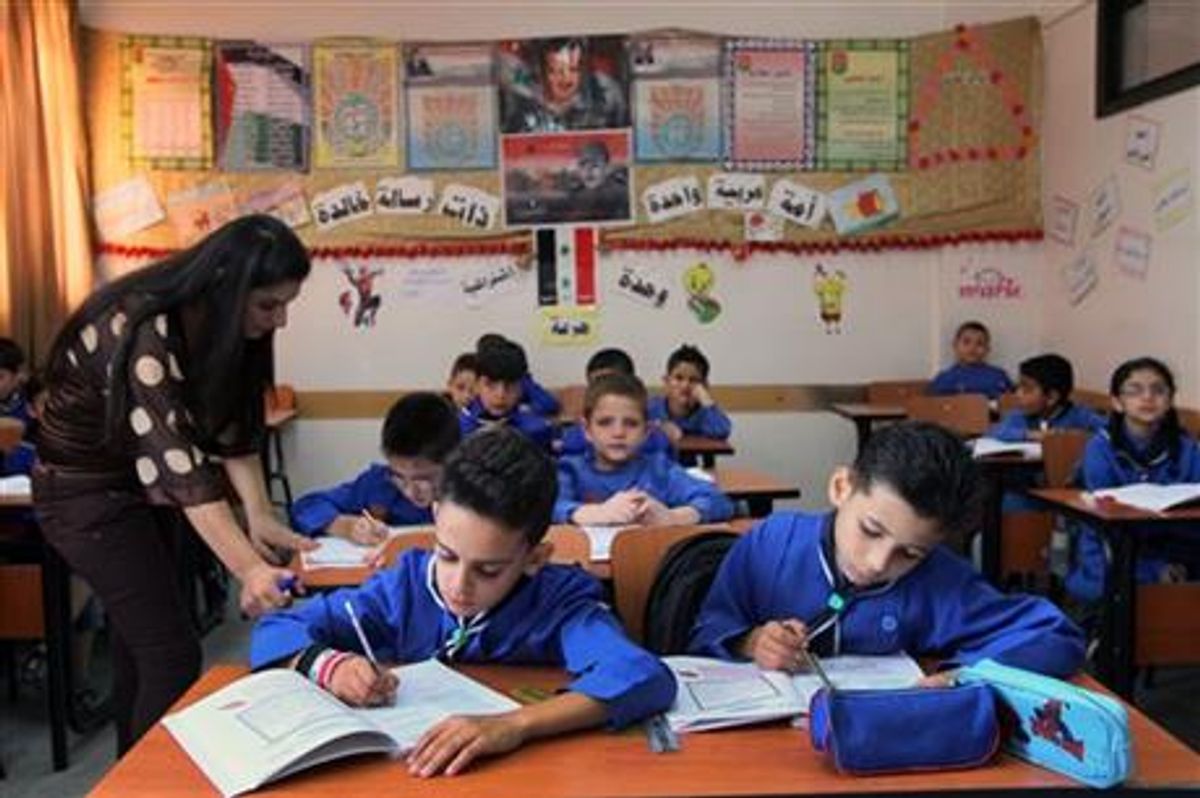 DAMASCUS, Syria (AP) — Facing extraordinary challenges, millions of Syrian children in government-controlled areas returned to school this week despite the civil war that has left almost 4,000 schools — one in five — damaged, destroyed or sheltering displaced families.

In Damascus, the Syrian capital, a frequent target of mortar shells fired by rebels entrenched in the suburbs, the government insisted on starting the academic year on time, despite the constant threat.

At the Suleiman Hassan Shuaib school in the upscale Mazzeh neighborhood of Damascus, children and parents greeted the start of school with a mix of anticipation and concern.

"They no longer sleep at regular times because of the loud sounds of artillery and mortar rounds," Ibrahim said. "Until now, they run to my room in panic whenever they hear loud booms."

Principal Ali Ali said many of the school's 500 students are newcomers who transferred from schools in war-shattered towns and cities across the country. The school now uses an underground depot as a shelter in case of emergency, and employs a psychologist to deal with students suffering fear and trauma.

"It's normal that the habits of some pupils have changed, but in general, a large number of them look courageous and show indifference to what is happening," said Raneem Diab, the psychologist.

She added that the worst hit were the new arrivals from schools in the Damascus suburbs, where fighting between government forces and rebels has raged for months.

"Regretfully, what is happening affects children, but we are trying to raise their morale and bring them up properly despite these difficult circumstances," she said.

Children's activities have been restricted because of the war, so parents said the start of school was a chance to meet friends and have fun after a summer spent largely confined to home.

"The children have been paying a heavy price," said Youssef Abdel-Jelil, a UNICEF representative in Syria.

A recent report by the Britain-based charity Save the Children estimated that hundreds of thousands of children have not attended school in the past two years. It warned that the civil war is reversing one of Syria's main prewar achievements — in 2010, nearly all children of school age had completed primary school.

With the conflict well in its third year, the statistics serve as a testament to a gloomy future in which chances of Syrian children getting a basic education have been halved, Abdel-Jelil told The Associated Press.

At least 4,000 schools — or one in five — have been damaged or destroyed nationwide in the conflict, according to recent estimates by UNICEF. About 1,000 schools serve as shelters for displaced Syrians, and some schools have been transformed into barracks. Since the last school year, almost 2 million Syrian children, aged 6 to 15, have had to leave school because of violence or displacement.

Syrian Education Minister Hazwan al-Wiz insisted that schools would open on time despite the difficulties "because Syria's children are the future." The minister pointed out that some 600 schools have been renovated and 1,000 others have been turned into centers for displaced Syrians.

In rebel-held areas, which have largely descended into chaos, most schools were closed.

Mohammed al-Khatib, an activist based in the northern city of Aleppo, Syria's largest, said more than half the schools are closed.

"The security situation is bad and people are worried about explosions and kidnappings," al-Khatib said. "There is no electricity, no services and no heating in winter."

In the absence of a proper school year, UNICEF has launched the "Back to Learning" campaign which aims to reach 1 million conflict-affected primary school children.

In Damascus, children returning to school put on a brave face.

Sitting at his desk in his blue uniform, 12-year-old Anas al-Hakim said he was happy to be back.

"It's better than staying at home. I am not afraid, it's normal now to hear those sounds," he said.