Our country's testing obsession benefits corporations, not kids. And it's getting worse 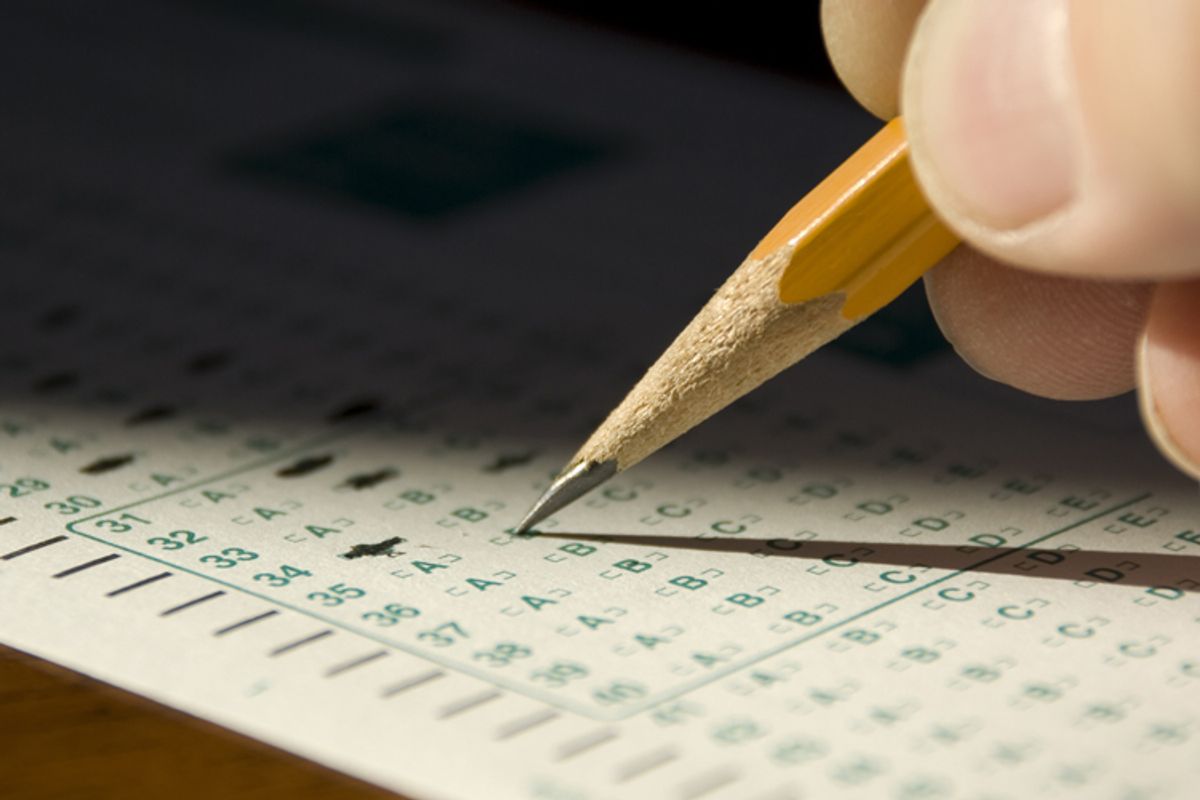 First No Child Left Behind and Common Core, and now this: Charter schools in our nation’s capital are going to give high-stakes tests to 3- and 4-year-olds. This “culture of testing” is deeply troubling for what it emphasizes – and what it doesn’t. After all, if testing were the best way to ensure success in today’s economy, why did a Chinese educational leader recently say that he would know their education system was improving if students started doing less well on tests?

Our ultimate goal is to help children live up to their potential to become happy adults who make positive contributions to society. The key traits that characterize such adults include a zest for life, creativity, perseverance, empathy, effective communication and the ability to cooperate with others. These are things that can’t be measured well – if at all – by tests. So why are we investing so much time and money in testing children along the way?

The cost of this culture of testing extends well beyond wasting teachers’ and students’ time, and taxpayer money. These tests undermine learning, the very thing they’re designed to promote. Studies have shown that people who are observed and judged while learning new material learn less than those who aren’t. And test preparation steals time and energy from other, far more productive pursuits, most notably free play and exploration. (As Hara Estroff Marano also writes in “A Nation of Wimps: The High Cost of Invasive Parenting”: “It's in play that cognitive agility really develops. … It fosters decision-making, memory and thinking, speed of mental processing.”)

Play also promotes creativity, which – inasmuch as it can be measured – has been found to be the best predictor of adult success. But creativity requires not just space and freedom, but a tolerance for making mistakes (not allowed on tests) and learning from them. These are the foundations of scientific and business innovation and entrepreneurship.

Our world is changing rapidly, and the majority of people will soon work as free agents. Those who thrive will be flexible and creative and able to continually update their skills to remain relevant. Fortunately, children are born eager to learn. But the culture of testing dampens their enthusiasm, turning learning into a chore that is to be avoided if at all possible (hence the perennial question, “Will this be on the test?”).

Tests are a disservice to children in yet another way, because they assign value to human beings. From a very early age, children internalize these labels, which can either become self-fulfilling prophesies (in the case of low scores) or else discourage risk-taking or perseverance (in the case of high scores, as explained in Po Bronson and Ashley Merryman’s book, “Nurture Shock: New Thinking About Children”).

Tests are also seen as a way to ensure teacher and school “accountability.” But the emphasis once again is on the wrong thing – it should be not on teaching, but on learning. Meaningful learning – new knowledge that the brain retains by integrating it with previous knowledge, rather than data that is memorized for a test and then discarded – can only happen when students are motivated, interested and engaged in the material, because they need to understand it to meet personally relevant goals. This need arises from within; no teacher or other adult can make it materialize.

Besides, successful adults are those who feel accountable to themselves, and the only way to create such adults is to encourage such thinking during childhood. For these reasons, I don’t think a teacher is, or should be, accountable for what or how fast my child learns – only my child is accountable, to herself, for that. What a good teacher can do is facilitate my child’s learning. But that’s another thing that’s impossible to measure – we just know it when we see it.

School boards and politicians are, perhaps understandably, concerned about “outcomes.” But what kind of outcome are we working toward? High test scores don't mean a student has acquired the social, emotional or mental skills that lay the foundation for a fulfilling adulthood. To the contrary: On her global tour of high-test-scoring nations, 2012 National Teacher of the Year Rebecca Mieliwocki encountered many miserable students, as well as school officials who considered their rankings "hollow victories," because of the way their testing-obsessed systems stunted innovative thinking.

The one beneficiary of the “culture of testing” is the half-a-billion-dollars-a-year testing industry, which has mushroomed thanks to taxpayer money, at a time of serious government fiscal problems.

Our country can travel further down this discredited path, or it can forge a more enlightened path, facilitating meaningful learning that respects, empowers and nurtures the whole child. Which of our school districts will be bold enough to lead the way?

Luba Vangelova is a widely published former journalist who currently works as a communications consultant (she is the founder of Catalyst Communications LLC). She is also a parent living in Washington, DC and participated in the American Alliance of Museums’ working group on the future of education.