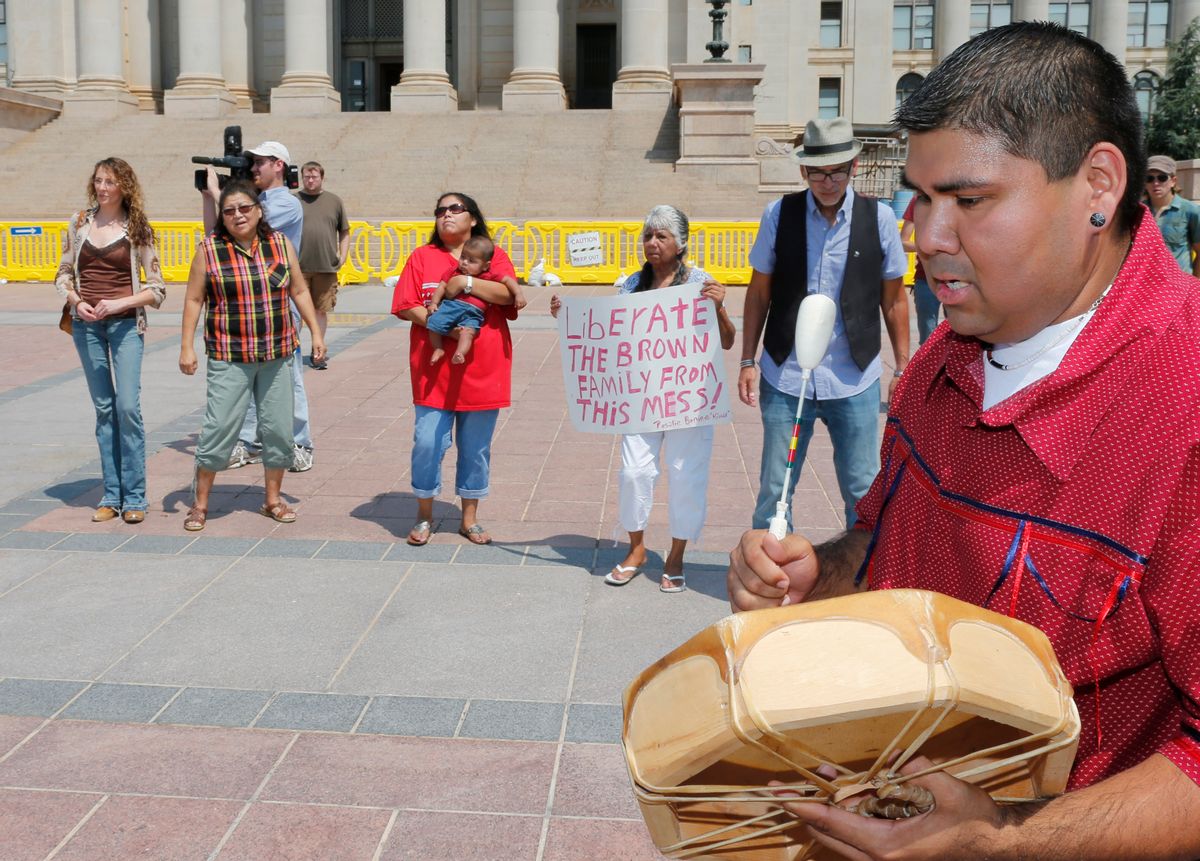 Chebon Kernell beats a drum and sings as participants dance during a rally in support of three-year-old baby Veronica. (AP/Sue Ogrocki)
--

“Baby Veronica,” the four-year-old Cherokee girl who’s been in the center of a nationally-watched adoption battle, was returned to her non-Native American adoptive family on Monday evening.

The adoption saga began when Veronica’s non-Native American biological mother arranged for the South Carolina-based Capobiancos family to adopt her before she was born.

Her biological father, Dusten Brown, a member of the Cherokee nation, claimed he did not know the mother planned to give her up for adoption when he signed away his parental rights.

Brown convinced a South Carolina family court that the Indian Child Welfare Act of 1978 allowed him to have custody of Veronica, who is 3/256th Cherokee. The 1978 law was designed to reduce the high rates of Native American children being adopted by non-Native American families and losing contact with their culture.

Veronica was sent to live with Brown in Oklahoma in 2011.

In June, the US Supreme Court overturned the ruling and said the act did not apply because Brown had been absent from Veronica’s life. The Capobiancos finalized their adoption of Veronica in July, but Brown refused to hand her over, winning an emergency court order on August 30 that blocked the transfer.

On Monday, the Oklahoma Supreme Court lifted the stay, saying it did not have jurisdiction over the child.

Jessica Munday, a spokeswoman for Matt and Melanie Capobianco, said that Veronica remembered the couple. The transfer “was smooth,” she said.

A statement by Cherokee Nation Attorney General Todd Hembree released late Monday suggested that the legal battle could be coming to an end after four years, Reuters reported. "Veronica Brown will always be a Cherokee citizen, and although she may have left the Cherokee Nation, she will never leave our hearts," Hembree said.

Hembree added that he hoped "the Capobiancos honor their word that Dusten will be allowed to remain an important part of Veronica's life."