Pick of the week: Pagan sex replaces Christianity on a creepy island 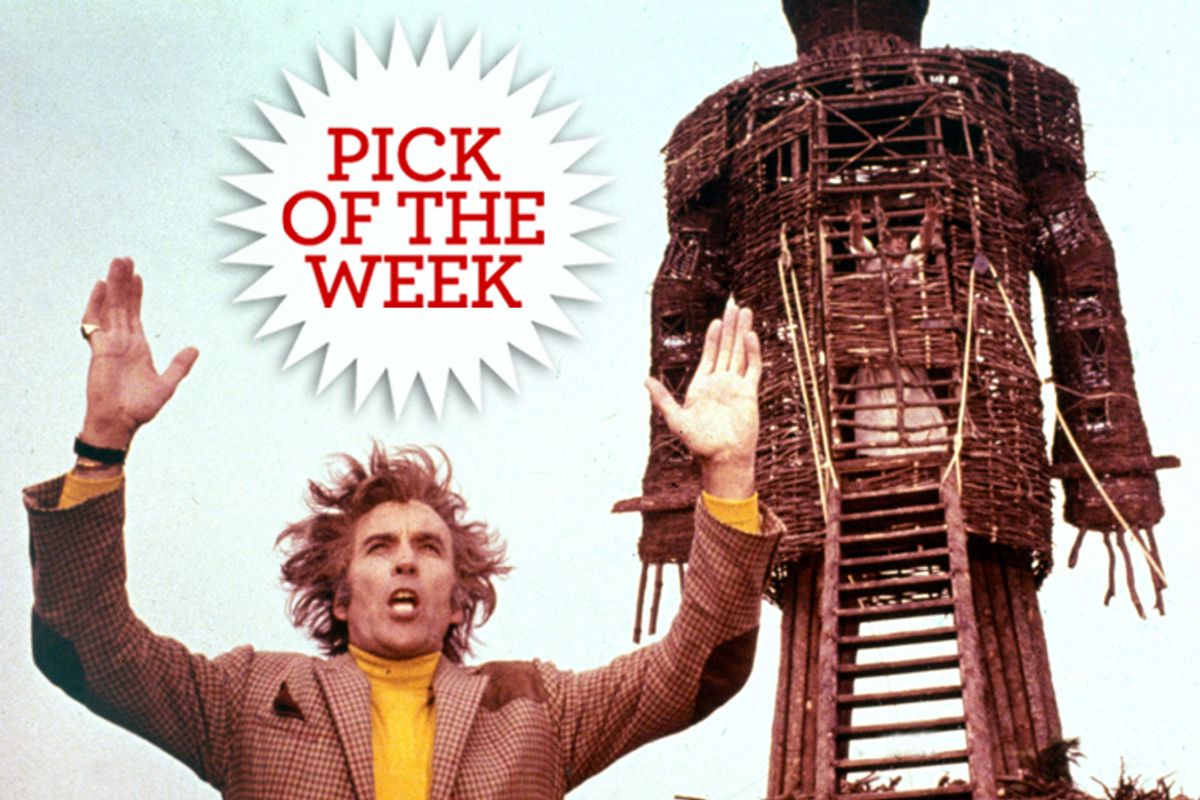 Even in the various butchered versions available over the decades, Robin Hardy’s 1973 film “The Wicker Man” – which was not released in the United States until 1979 – has attained the status of a British horror classic, and become one of the ultimate cult movies in cinema history. We’ll get to the history of the various versions in due course, but seeing “The Wicker Man” in the new 40th-anniversary digital restoration being released by Rialto Pictures, and endorsed by Hardy as his “final cut,” is an absolute must for all serious movie buffs. (I've pretty much blacked out the fact that there was a 2006 American remake starring Nicolas Cage and directed by Neil LaBute. Can we agree to pretend that did not happen?)

It was horror fans, especially in America, who first embraced “The Wicker Man” and have celebrated it over the years. Frederick S. Clarke, the legendary founder of Cinéfantastique magazine, once dubbed it “the ‘Citizen Kane’ of horror films,” and as that description suggests, "The Wicker Man" was always understood as pushing past the limits of the form. At this point I’m afraid the label hurts more than it helps, at least in terms of potential audience and expectations. By contemporary standards, “The Wicker Man” isn’t a horror movie at all; while it’s certainly eerie and disturbing, with an ending that shocked many 1970s viewers, no violence or bloodshed are depicted on-screen. It’s a mystery, a thriller, a puzzle picture (I’m willing to bet it’s one of Christopher Nolan’s favorite films), an erotic allegory and a religious parable. For screenwriter Anthony Shaffer (best known for his hit play and film “Sleuth”), it was also about scraping away the civilized surface of 20th-century Britain and finding what lay beneath. Of course the pagan and/or Wiccan renaissance of recent decades had many sources, but this movie was surely one of them.

Sgt. Neil Howie, the nominal hero of “The Wicker Man” – and like so many things about this movie, that’s debatable – is a tightly wound Scottish policeman best described as the “Patrick McGoohan type.” Indeed, when I saw this movie as a kid I’m pretty sure I thought that was McGoohan, but it’s actually Edward Woodward, who would later star in Bruce Beresford’s “Breaker Morant” and spent several years on U.S. TV in the late-'80s series “The Equalizer.” Howie comes by seaplane to a remote island off the Scottish coast called Summerisle, which as in the grand old days is the private property of its laird, deliciously overplayed by Christopher Lee as a combination of Oscar Wilde, David Bowie and Rob Roy. While I say “overplayed,” please don’t take that as disparagement – you certainly don’t want Lee to hold anything back, and this is one of the richest and most enjoyable performances of his entire career.

But Howie doesn’t actually meet the famous Lord Summerisle for some time. He has received an anonymous letter from someone on the island who claims that a young girl called Rowan Morrison has gone missing, and suggesting that some sort of foul play has been hushed up. Everyone Howie meets on the island professes bafflement, at least at first, when presented with Rowan’s photograph: Nae, lad, tha’ lassie dinna belong heer. But this zealous, chaste and devout copper can tell they’re prevaricating, if not flat-out lying, and furthermore the culture of Summerisle outrages him. The veneer of Christianity pasted across the rest of Scotland has been peeled away; at the instigation of the present Lord Summerisle’s grandfather, the islanders have returned to pagan fertility worship. Young people couple outdoors by the dozens on warm evenings; women dance naked by firelight that their wombs may bear fruit; a class of preteen girls is instructed that the Maypole symbolizes the erect penis, source of so many good things.

Howie is scandalized, to be sure, and promises to report all these awful things to the proper authorities. But as the ridiculously attractive schoolteacher (Diane Cilento, who would soon marry screenwriter Shaffer) quite reasonably observes, he has his religion and the islanders have theirs. Of course the children learn about Christianity, she assures him – “in comparative religion class.” Is the virginal Howie ever tempted, you ask? Oh boy, is he ever. Like Jesus in the desert, pretty much. Even a Scotsman as upright as he has heard bawdy ballads about the landlord’s daughter, and in the mildly grotesque environment of the Green Man, Summerisle’s only inn, that daughter is Willow MacGregor, played by bodacious Swedish beauty Britt Ekland (later to become Rod Stewart’s longtime girlfriend).

One could choose to view “The Wicker Man” cynically, as an extremely clever version of 1970s “male-gaze” cinema in which Summerisle’s implausible levels of female pulchritude and nudity are not technically gratuitous, but serve the story. That’s a valid perspective, but from this distance it looks more to me like a work of seductive erotic genius. This movie is a product of its time, to be sure, but that time was perhaps the most adventurous era in cinema history. If the scene in which Willow tries to lure Howie to bed by dancing naked and drumming on the walls – while he tosses and turns, beseeching God for help and all but pronouncing, “Get thee behind me, Satan” – verges on prurient caricature, it might not be the sexiest moment in the film. That’s the outdoor monologue delivered by a kilt-clad, androgynous Lord Summerisle, accompanied with images of copulating snails.

Yes, that’s right – this is a “horror movie” that features nature-film footage of mollusks mating. (And yes, most terrestrial snail species are hermaphroditic, which may or may not be relevant.) Along the way to an old-fashioned May Day pageant with an unexpected denouement – which our hero is repeatedly warned to avoid – Sgt. Howie surprises the town librarian (also hot) in her bathtub, identifies Rowan Morrison’s grave (by its rowan tree, duh) and exhumes what is buried there, and enjoys the ambiguous hospitality of the raffish Lord Summerisle in his castle. As the mood of the film shifts and Summerisle’s secrets are revealed, Hardy and Shaffer do an exemplary job of leaving judgment to us: Who is evil and who is good in this story, and who is to say which is which? Is Lord Summerisle a true believer or a cynical manipulator? Does Howie consent to what befalls him, as a test of his faith?

While a great many people reading this have already seen “The Wicker Man,” I will go no further. We can continue the discussion elsewhere, if you wish. As to the version you will see here: No, this is not the “original cut” of 102 minutes, which Hardy completed in 1973 but never saw released, nor is it the 117-minute version, which some have alleged may exist. (Hardy says there may have been a rough cut that long, but not one he ever wanted to release.) This “middle version” runs 92 minutes and is, in effect, a full digital restoration of the film as it was released in the U.S. in 1979. It was made by combining the original negative of the shorter British release with footage from an American release print discovered earlier this year in the Harvard Film Archive. So you may have seen something very close to this version before, on VHS or DVD or the big screen – but you haven’t seen it looking remotely this good, with the colors of Seamus Flannery’s art direction, Sue Yelland’s costumes and Harry Waxman’s crisp photography returned to their original vividness.

While I’m sure this won’t silence the yearning for more among “Wicker Man” fandom, here’s the important point: Robin Hardy has repeatedly said he stands by this version and “absolutely” prefers it to the longer original. Most of the additional 10 minutes, he says, involved irrelevant back-story scenes on the mainland, before Howie leaves for Summerisle, along with an extended conversation between Howie and Lord Summerisle about the cultivation of apples. This Rialto release you can now see in theaters, which will surely be the source for a new home-video release within a year or so, “fulfills my vision,” Hardy says, “of what it was intended to convey to the audience.” What it conveys, in fact, is a gorgeous and unsettling spectacle greater than the sum of its parts, an anarchic, arousing and morally ambiguous pop masterpiece that lives up to its legendary status.

“The Wicker Man – Final Cut” is now playing at the IFC Center in New York. It plays Oct. 4-5 only at the Castro Theatre in San Francisco; Oct. 11-17 at the Jean Cocteau Cinema in Santa Fe, N.M.; Oct. 18-19 only at the Belcourt Theatre in Nashville; and Oct. 22 only at the Zinema 2 in Duluth, Minn. It opens Oct. 25 in Bellingham, Wash., Chicago, Dallas, San Diego and Washington; Oct. 28 in Pittsburgh and Seattle; Nov. 1 in Los Angeles and Portland, Ore.; Nov. 8 in Philadelphia; and Nov. 15 in Boston, Denver and Houston, with more cities and dates to be announced.