“Muscle Shoals” and the GOP’s quest for purity

How the amazing musical saga of one Alabama town reflects America's greatest strength, and rejects Puritanism 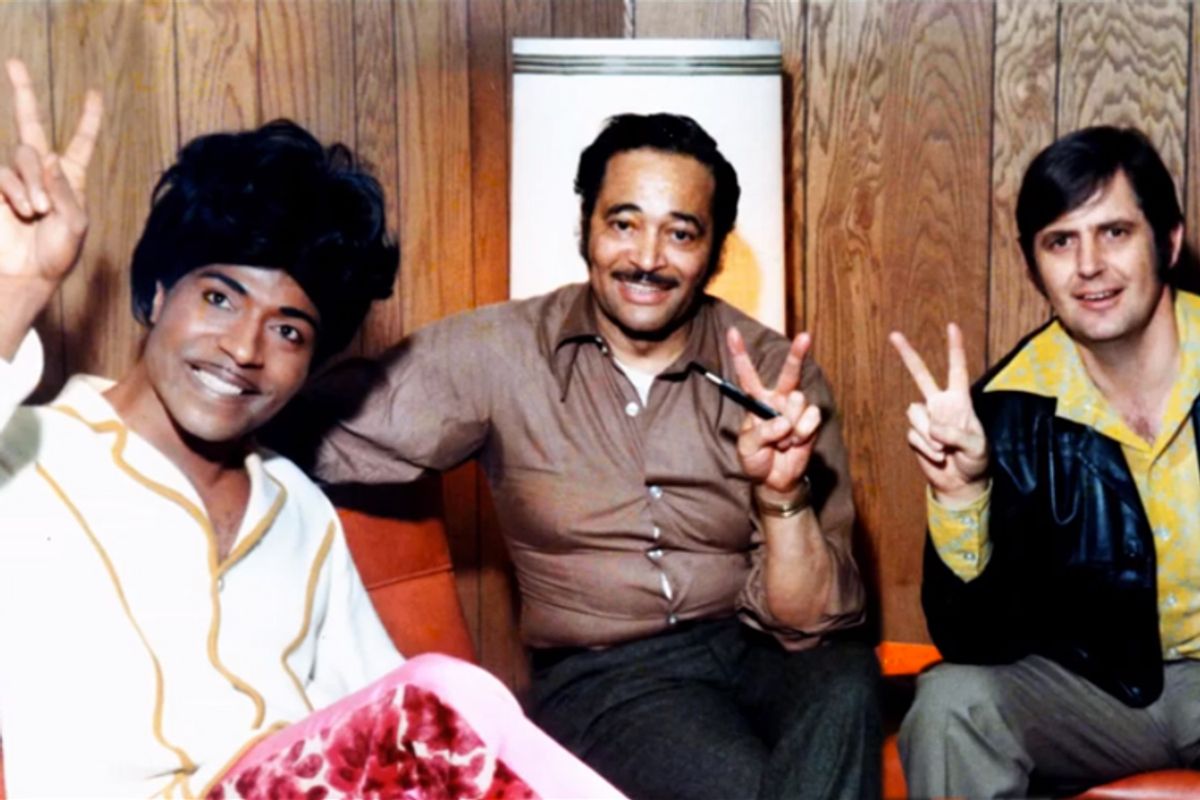 Now Muscle Shoals has got the Swampers
And they’ve been known to pick a song or two (yes they do)
Lord, they get me off so much
They pick me up when I’m feeling blue (and now how ‘bout you?)

That’s from the last verse of “Sweet Home Alabama,” a song that arguably compresses everything great and everything terrible about America in the 20th century into five minutes. (It was recorded in Georgia, by the way, and no one in Lynyrd Skynyrd was from Alabama.) I’m not sure I or anybody else can entirely make sense of that song, which lends itself all too easily to white-pride, neo-Confederate appropriation while claiming to be innocent of any such associations. If it made sense, it probably wouldn’t be a rock ‘n’ roll song.

But I can tell you this much: By referencing Muscle Shoals, a small city on the Tennessee River in northern Alabama, and the Swampers, an all-white rhythm section who played on some of the greatest R&B records ever made, the Skynyrd songwriters were attaching themselves, however covertly, to the tradition of race-mixing and cultural ferment that is the greatest source of strength and vitality in American culture. The story of the immensely influential “Muscle Shoals sound” in pop music, as seen in a revelatory and inspiring new documentary by Greg “Freddy” Camalier, belongs to the tradition of Huck and Jim on the raft, of Faulkner’s Quentin Compson, of New Orleans jazz and Motown and Ralph Ellison. However you want to parse the undeniable problems and limitations of that tradition, it involves the rejection of ideals of purity, of essentialism, that’s something like Huck Finn’s famous rejection of the Widow Douglas’ overly fussy cooking: “In a barrel of odds and ends it is different; things get mixed up, and the juice kind of swaps around, and the things go better.”

American conservatives – among them the people who’d like to claim “Sweet Home Alabama” for the Confederacy – don’t like things mixed up and swapped around. They take the Widow Douglas’ side. But while that good lady, in Mark Twain’s telling, is a well-meaning and pathetic figure who can no more contain her adoptive wild child than she can hold back the Mississippi, the Puritan tradition in America is more sinister. They have been obsessed with purity for generations, if not centuries, and are obsessed with it still. Sometimes this takes the form of Jim Crow and the Ku Klux Klan, sometimes that of rooting out Communism in the United States Army and the Eisenhower administration. Sometimes it has meant executing accused witches by the dozen, apparently for the crime of befriending slaves and poor people.

At the moment, the puritanical tradition in American politics finds its fullest expression in a political party that has evidently lost its ability to win national elections but is willing to shut down the government and risk the entire country’s economic future rather than compromise its ideals. No doubt that seems courageous and inspiring to those who share those ideals, which, as I wrote last week, are not as crazy as they seem at first glance. (Republican strategy for holding power: bread and circuses, without the bread.) But there’s a current of nihilism, of ritual self-purification, of red-white-and-blue seppuku, that has an epidemiological grip on the American right, and it’s disturbingly strong right now.

It’s almost impossible to say anything clear-headed about the hyper-patriotic zeal of Tea Party people who put those giant screaming-eagle stickers and “Terrorist Hunting Permits” on the back windows of their F-150 pickups, about the desperate ahistorical yearning to recapture some libertarian white-people wonderland that never existed in the first place. But let’s try this: That’s an American tradition, but it’s not the American tradition. I firmly believe that patriotism is the last refuge of scoundrels, and that flag-waving does little more than reveal the weakness of one’s argument. But it is a matter of fact, and not political opinion, that the dominant current of American culture has always been a heterodox and dynamic flow, full of surprises and unexpected combinations and cultural and racial miscegenation of all sorts. That is the lesson of Muscle Shoals, and of Camalier’s film “Muscle Shoals.”

Rick Hall, the rangy engineer, producer, songwriter and studio proprietor who more than anyone else invented the Muscle Shoals sound, tells a great story in the film about meeting R&B star Wilson Pickett. Hall’s FAME Studios, which had started out in the late ‘50s atop a drugstore in nearby Florence, Ala., had attracted the attention of Atlantic Records head Jerry Wexler, largely because of a record Hall had cut in 1966 with a local unknown who worked as a hospital orderly. That singer was called Percy Sledge, and his song was called “When a Man Loves a Woman.” (It was a No. 1 hit in the U.S. right away, and in one of those odd pop-culture moments, a No. 2 hit in Britain 21 years later.) So Wexler sent Pickett to Muscle Shoals after a dispute with the Stax Records studio in Memphis – and Pickett and Hall disliked each other immediately.

Pickett had a reputation as a hothead with a violent temper, and Hall remembers sizing him up as “a man to be feared.” He could tell, he adds, that Pickett was looking at him and wondering, “What am I doing down here with this Alabama cracker?” (Actually, the word Pickett uses in his version of the story is “peckerwood.”) Pickett had run away from rural Alabama when he was 14 years old, very likely to get away from people who looked like Rick Hall. After working through that initial mistrust, Pickett and Hall became “soul brothers,” as Hall puts it, and recorded some of Pickett’s funkiest material and biggest hits – “Mustang Sally,” “Funky Broadway,” “Land of 1,000 Dances” – with the Swampers, FAME’s legendary all-peckerwood rhythm section, behind him. They were known to pick a song or two, all right.

It was during a break in one of Pickett’s 1968 recording sessions in Muscle Shoals, by the way, that he and guitarist Duane Allman threw together a cover of “Hey Jude” and accidentally invented what would come to be called “Southern rock.” Things get mixed up, and the juice gets kind of swapped around. Quite likely the members of Lynyrd Skynyrd knew that story; as aficionados of that band already know, the first Skynyrd album was recorded in Muscle Shoals (not at FAME, but at the Swampers’ new studio across town after they split with Hall), but not released until after the 1977 plane crash that killed singer Ronnie Van Zant and two other band members. It’s easy to get distracted by these kinds of historical tangents and accidents in the Muscle Shoals story, mostly because the more you learn about them the more they feel like they all fit together into one big Tennessee River flow.

How do we make sense of the fact that “Mustang Sally” and “When a Man Loves a Woman” and Aretha Franklin’s breakthrough hit “I Never Loved a Man” and any number of other funk, soul and R&B classics were recorded with a band of backwoods Alabama white boys? Well, it’s complicated – let’s start there. Of course white privilege was involved, because even though Rick Hall grew up dirt-poor, he still belonged to the class of people who were able to buy property and start businesses in 1950s Alabama, and he hired white musicians – at least at first; his post-Swampers bands were integrated – because it was the natural thing to do. All that said, Hall’s also a guy with a tremendous ear and immense soulfulness who knew what he wanted – and what he wanted was a sound that fused Delta blues, hillbilly and urban African-American music. And something geographical or historical or spiritual about that obscure river-bend in northern Alabama made that possible.

From scanning a few other reviews of “Muscle Shoals” I can tell that some of my colleagues would have preferred more of that kind of historical or theoretical background in the movie. Sure, maybe – but just as “Sweet Home Alabama” speaks for itself without revealing its meaning, so does this American story of ferment and feuding and amazing pop music. I don’t need a rock critic in an armchair to tell me that the Rolling Stones’ “Brown Sugar” is intensely problematic, nor that it’s amazing that the Stones spent three days in Muscle Shoals and recorded that song and “Wild Horses,” capturing a sound they never found before or since. Swamper guitarist Jimmy Johnson, who helped produce those tracks, insists that the Stones were not “drinking and drugging” during their brief Alabama sojourn. Mick Jagger and Keith Richards remember it differently.

Camalier allows Rick Hall and his numerous other interviewees, from Jagger and Richards to Aretha Franklin and Percy Sledge and Wilson Pickett and Jimmy Cliff and Bono and Alicia Keys, to tell pieces of a story that cannot satisfactorily be classified. “Muscle Shoals” is not the story of a racial utopia or a perfect democracy, but it is the story of the civil-rights movement pursued by other means, of the great river of American culture that mixes everything together. Ted Cruz and his pals are trying to swim upstream, turn back the clock, and undo all of Huck’s mixing and swapping. But the river only runs in one direction.

Then, of course, there’s the soundtrack to the movie, which I want to hear again right now and which explains everything as well as it can be explained. Hall miked the bass and drums a little tighter than other people did in the ‘60s, and did take after take after take in search of the right groove. Maybe that’s all it was – and maybe, as the Native Americans who once inhabited the region supposedly believed, the Tennessee was a “singing river” with magical properties. Camalier ends with a breathtaking present-tense Muscle Shoals session that features Alicia Keys covering Bob Dylan’s gospel tune “Pressing On,” and then goes to “Sweet Home Alabama” over the closing credits. That might be all you need to know right there. In the immortal words of Ronnie Van Zant (and, for that matter, Paris Hilton): Turn it up.