How Ted Cruz is coordinating the (incoherent) conservative shutdown strategy

How a small group of hard-liners, activists and conservative media people ended up running the entire GOP 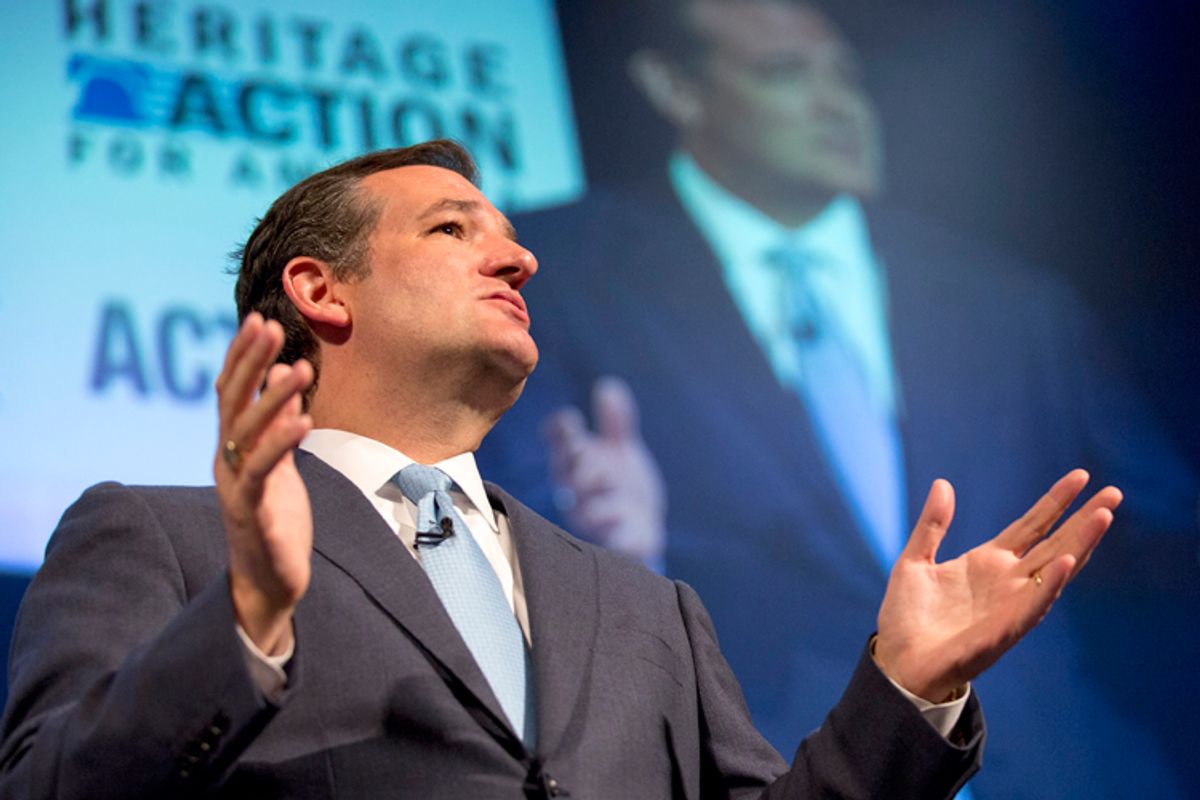 We sort of knew that while Ted Cruz was acting in defiance of Senate Republican leadership, he had a merry band of followers, consisting of a couple of other senators and a larger bloc of hard-liners in the House. Cruz is leading this unofficial new caucus along with his stalwart ally, Sen. Mike Lee, who is just as right-wing as Cruz but less telegenic. Cruz and Lee have been driving the entire GOP message on the shutdown even though they represent, and have been meeting with, only a fraction of congressional Republicans. The "let's just fund veterans and parks" thing? That was them:

The private pow-wows have enabled conservative lawmakers to coalesce around some of the hallmark proposals of the government-funding fight, including the notion that they could fund government programs one at a time.

It's also pretty obvious that Cruz and his allies are totally winging this, with no coherent endgame or even realistic goals. But they are coming up with some really great "spin"!

One thread focused on a dispute over whether to call the government closing “Obama’s shutdown” or “Harry Reid’s shutdown.” They settled on the senate majority leader, and Cruz started using "Harry Reid's Shutdown" as a Twitter hashtag.

That bit of brilliant social media strat came not from the meeting of lawmakers, but from the email listserv run by Cruz's staff. This listserv includes advocacy groups and nonprofits, and also, of course, conservative media people.

Allow me to make a point I've made before: The reason conservatives blew up about "Journolist," the notorious liberal media email listserv, is because they assumed liberals coordinate their messaging the same way that conservatives traditionally have. So the fact that conservative media people are working directly with a Republican senator and activist conservative groups to develop and refine their shutdown related memery and arguments is also unsurprising. Spending yesterday fixating solely on veterans trying to visit a war memorial is not an idea that simply occurred spontaneously to everyone in the right-wing press.

What's funny about all of this, though, is how much it just reinforces the insane bubble that all of these people -- conservative members of Congress, conservative media people and professional conservative activists -- live their entire lives in. They are all talking to each other, and only to each other. The fact that the conservative position is deeply unpopular, the fact that conservative strategy is incoherent and self-defeating, none of that is reaching them. John Boehner and Ross Douthat know what's going on. Rep. Tim Huelskamp only knows what he reads at RedState and what he hears from people who only read RedState. Here's the National Review's Robert Costa explaining exactly why all of this is happening:

The outside groups don't always move votes directly but they create an atmosphere of fear among the members. And so many of these members now live in the conservative world of talk radio and tea party conventions and Fox News invitations. And so the conservative strategy of the moment, no matter how unrealistic it might be, catches fire. The members begin to believe they can achieve things in divided government that most objective observers would believe is impossible. Leaders are dealing with these expectations that wouldn't exist in a normal environment.

Republicans have no agreed-upon leader, their supposed policy agenda completely changes month to month, and they're just making up their strategy on the fly. The one thing they're good at is talking to each other, and that's just making everything worse.

Still: Never underestimate the ability of Democrats to lose a standoff with a bunch of deluded nuts. Democrats don't have a Cruz, they have an Obama, who is always more than willing to attempt to give the deluded nuts at least some of what they claim to demand. Eventually, maybe, they will take him up on the offer.