The smearing of Miriam Carey: How the media bungled the Capitol Hill shooting

After police shot her last week, the victim went from being a violent shooter -- to unarmed but a crazy deadbeat 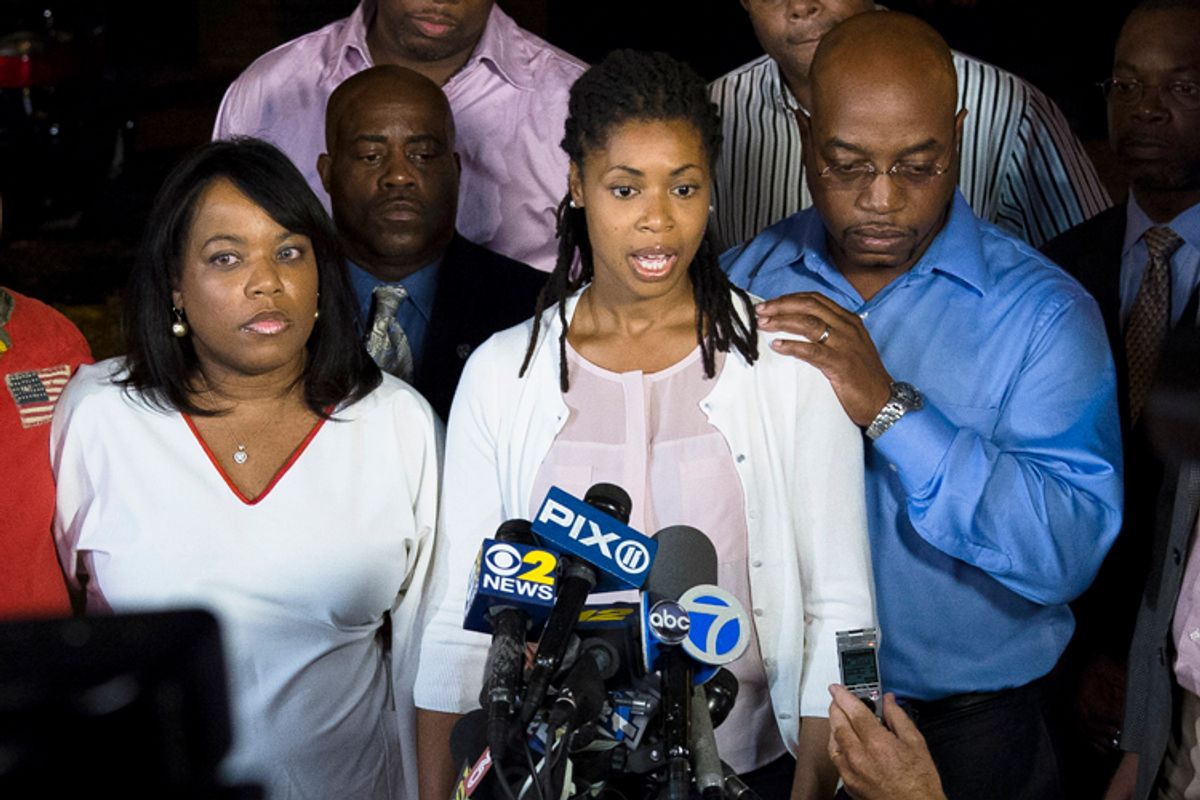 Amy Carey, center, sister of Miriam Carey, speaks to the media outside the home of her sister Valarie, second from left, in Brooklyn, Oct. 4, 2013. (AP/John Minchillo)
--

In the immediate aftermath of Thursday’s fatal shooting of Miriam Carey by DC police (after she rammed into barricades near the White House and led a police chase), the media instantly delivered a certain narrative: A crazy, dangerous, armed shooter was endangering the lives of prominent DC officials and needed to be taken down for safety reasons. When that story was undermined by subsequent developments, a new explanation dominated: The victim was mentally ill and had presumably done crazy things that necessitated her deadly shooting.

But while Carey's family since corroborated that she indeed suffered from mental illness, the temptation to use this confirmation as evidence that the media (and police) handled this tragedy appropriately, is misguided. Like Alec MacGillis and several others, I am skeptical of the insistence that her shooting was necessary and inevitable.

For one thing, at least one part of the chaotic series of events was clarified: Carey was unarmed and shot after having gotten out of her car.

Ms. Carey managed to get out of the car, and was shot by several officers. According to a law enforcement official, she was not armed, and it was not known whether she presented an immediate danger.

Yet, with few exceptions, the media had little interest in exploring those two tiny details. In fact, they unquestioningly repeated the police narratives which—no surprise there—were intended to justify the shooting.

Several sites ran with headlines suggesting that Carey was mentally ill and a deadbeat (as if being behind on condo fees automatically makes one a National Security threat). The New York Daily News, whose history includes sensational headlines and innuendos, remained true to itself.  At that point (Thursday afternoon, as Carey had just been shot), there was no explicit connection between her post-partum story and her actions near the Capitol, but that didn’t stop the tabloid's editors from leading with innuendo.  The story, which was updated Friday morning, has the following headline:

But the NYDN provided no evidence beyond a mention by a former employer, a periodontist, that she’d had a head injury resulting from falling down the stairs and the suggestion she had a temper and was fired because of it.

Carey’s former boss, Dr. Brian Evans, told The News that she “fell down some stairs and she had a pretty significant head injury” toward the end of the nearly two years she worked for him…

The story rendered Evans’ words (denying that her firing had been connected to mental illness) to imply the opposite conclusion:

When they let Carey go last year, “it was nothing related to any mental problems that we were in tune to,” he said. But Evans added that Carey had a temper, and he recalled how she became incensed when he asked her to quit parking in a handicapped spot at the medical building.

“She got very angry with that, so that started some friction. And then from there she was never insubordinate per se, or anything like that, but she tended to go against the grain a bit,” said Evans, whose practice is in Hamden, Conn.

The story went on to note her Facebook comments about "wack men," and her frustrating dating experiences—as if that were a strange thing for a single, presumably heterosexual woman to post.

NBC led with the headline that Carey was delusional, but again offered no proof beyond echoing unnamed sources. In fact, much of the story alluded to her tendency to be “rough.”

Dr. Barry Weiss, a dentist, told NBC Connecticut that Carey was working for him in January 2012 when she suffered a fall and missed two to three weeks. He said that she appeared increasingly stressed after an unplanned pregnancy. Relatives have said that she may have suffered postpartum depression.

Weiss said that he fired her in August 2012 after patients complained that she was too rough.

It is certainly true that defense attorneys for women on trial for killing their children, such as Susan Smith or Paula Thompson, have used post-partum as the basis of insanity defenses. But defense strategies are a poor foundation for identifying post-partum depression with violent tendencies, unless substantial proof is demonstrated.

Moreover, we heard from neighbors and friends that they thought of her as a happy person, a “catch,” a great mother, and a role model. But those details weren’t in most headlines. By Friday afternoon, nearly every single media story highlighted Carey’s depression and her temper to harden the initial assumption that she was crazy and angry—if not violent.

After returning to work from that injury, he said Carey had a "chip on her shoulder" and was too rough with some patients. She was fired in 2012.

The fact that Carey is Black has “politely” been ignored, much in the same way that Aaron Alexis’s racial identity was not mentioned by most media in the aftermath of the Navy Yard shooting. In fact, when I heard about the Navy Yard shooting, I assumed that the shooter was a white male. My assumption was partially based on the conspicuous absence of any mention of the shooter’s religious or racial identity and the immediate dismissal that the event was connected to “terrorism.” As importantly, I knew that most mass shootings are committed by white men, as Mother Jones reported earlier this year.  It wasn’t until later in the day, after his photo was posted, that I realized Aaron Alexis was African American.

In Alexis’ case, as in the case Miriam Carey, we hear the standard linguistic “neutral” meme that is ascribed to Black men and women who are associated with violent events: anger, temper, chip on her shoulder, deadbeat. Similarly, male Black teens are still closely associated with inherent criminality, “thuggery,” and other violent, animalistic, and sexualized personifications. We have seen this for centuries. We still see it: from the superpredator mantle of the 1980’s, to the Central Park Five, who were convicted in the media as beasts and brutes, and the defense of stop and frisk by Ray Kelly, Mayor Bloomberg and the NYPD.

Never for a moment, do these reporters consider that Black men and women have always been smeared with these traits, regardless of proof. Miriam Carey is subject to these terms—even though there are plenty of witnesses who describe her as upbeat, cheerful, strong, pleasant, happy. These are, in the ironic words of philosopher Charles Mills, part of “an epistemology of ignorance” features of a world made up by whites that preclude a more candid, historically aware, sympathetic understanding of social realities.